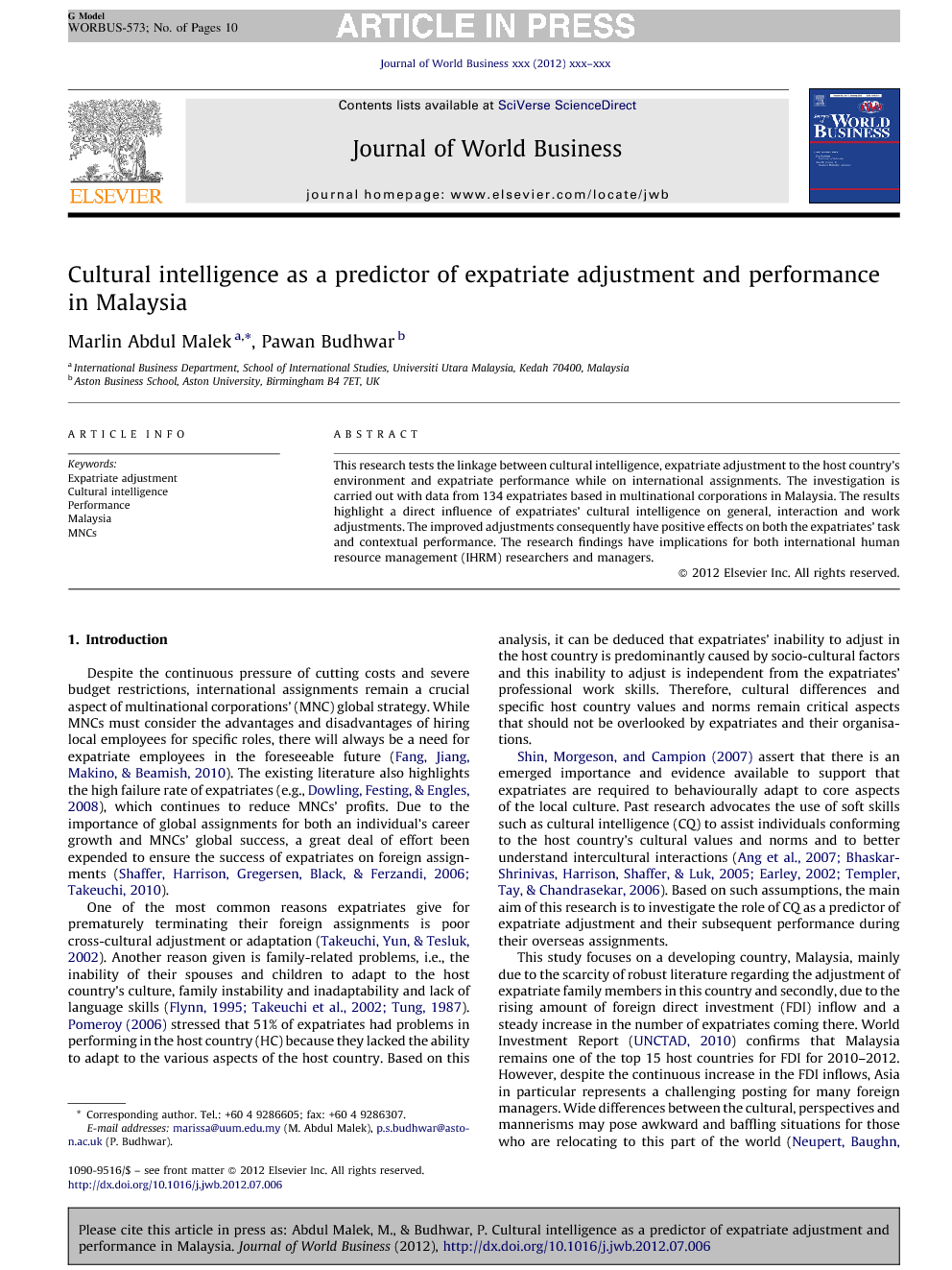 This research tests the linkage between cultural intelligence, expatriate adjustment to the host country's environment and expatriate performance while on international assignments. The investigation is carried out with data from 134 expatriates based in multinational corporations in Malaysia. The results highlight a direct influence of expatriates’ cultural intelligence on general, interaction and work adjustments. The improved adjustments consequently have positive effects on both the expatriates’ task and contextual performance. The research findings have implications for both international human resource management (IHRM) researchers and managers.

Despite the continuous pressure of cutting costs and severe budget restrictions, international assignments remain a crucial aspect of multinational corporations’ (MNC) global strategy. While MNCs must consider the advantages and disadvantages of hiring local employees for specific roles, there will always be a need for expatriate employees in the foreseeable future (Fang, Jiang, Makino, & Beamish, 2010). The existing literature also highlights the high failure rate of expatriates (e.g., Dowling, Festing, & Engles, 2008), which continues to reduce MNCs’ profits. Due to the importance of global assignments for both an individual's career growth and MNCs’ global success, a great deal of effort been expended to ensure the success of expatriates on foreign assignments (Shaffer et al., 2006 and Takeuchi, 2010). One of the most common reasons expatriates give for prematurely terminating their foreign assignments is poor cross-cultural adjustment or adaptation (Takeuchi, Yun, & Tesluk, 2002). Another reason given is family-related problems, i.e., the inability of their spouses and children to adapt to the host country's culture, family instability and inadaptability and lack of language skills (Flynn, 1995, Takeuchi et al., 2002 and Tung, 1987). Pomeroy (2006) stressed that 51% of expatriates had problems in performing in the host country (HC) because they lacked the ability to adapt to the various aspects of the host country. Based on this analysis, it can be deduced that expatriates’ inability to adjust in the host country is predominantly caused by socio-cultural factors and this inability to adjust is independent from the expatriates’ professional work skills. Therefore, cultural differences and specific host country values and norms remain critical aspects that should not be overlooked by expatriates and their organisations. Shin, Morgeson, and Campion (2007) assert that there is an emerged importance and evidence available to support that expatriates are required to behaviourally adapt to core aspects of the local culture. Past research advocates the use of soft skills such as cultural intelligence (CQ) to assist individuals conforming to the host country's cultural values and norms and to better understand intercultural interactions (Ang et al., 2007, Bhaskar-Shrinivas et al., 2005, Earley, 2002 and Templer et al., 2006). Based on such assumptions, the main aim of this research is to investigate the role of CQ as a predictor of expatriate adjustment and their subsequent performance during their overseas assignments. This study focuses on a developing country, Malaysia, mainly due to the scarcity of robust literature regarding the adjustment of expatriate family members in this country and secondly, due to the rising amount of foreign direct investment (FDI) inflow and a steady increase in the number of expatriates coming there. World Investment Report (UNCTAD, 2010) confirms that Malaysia remains one of the top 15 host countries for FDI for 2010–2012. However, despite the continuous increase in the FDI inflows, Asia in particular represents a challenging posting for many foreign managers. Wide differences between the cultural, perspectives and mannerisms may pose awkward and baffling situations for those who are relocating to this part of the world (Neupert, Baughn, & Lam Dao, 2005). Many managers who have succeeded in their domestic operations may often find that the mental maps they have relied on for so many years do not necessarily apply when they relocate overseas (Black & Gregersen, 2000). Consequently, expatriates are inundated with feelings of anxiety and uncertainty of not knowing what to expect in the host country both in work and non-work settings and these feelings can impede social integration and performance (Black, 1988 and Osland and Osland, 2005). Gudykunst (2005), in the Anxiety/Uncertainty Management (AUM) theory, emphasises the importance of better managing the feelings of anxiety and uncertainty in order to successfully adjust to the new environment and communicate with the local community. To transcend cultural boundaries, expatriates should have the ability to appropriately address and react to intercultural situations and cultural intelligence may be the skill that can help to improve the capability for successful adaptation (Peterson, 2004 and Thomas and Inkson, 2005). In this paper, we argue that the various components of CQ would positively influence the general, interaction and work adjustments of the expatriates in the host country and consequently improve their performance while assigned overseas. Utilising the AUM theory, we propose that by being culturally intelligent, expatriates would therefore manage their anxiety and uncertainty associated with their relocation to a different cultural background, thus putting in more effort for work related task accomplishment and socially integrating into the new environment. This paper is organised as follows. We first present a review of literature related to the theoretical stance underpinning the concept on cultural intelligence, expatriate adjustment and performance. Next, we develop hypotheses based on the relevant literature analysis. Further, we describe the method, study sample and measures before proceeding with the reporting of key findings of the statistical analysis. Finally, we conclude with the discussion on findings and their implications for both the academic research and practice and suggestions for future research.

The positive influence of CQ on the different facets of adjustment lends credit to Anxiety/Uncertainty Management theory (see Gudykunst, 2005). This theory indicates that by being culturally intelligent, expatriates could minimise the uncertainty and anxiety that stem from being in a culturally different environment. Consequently, the expatriates could expend more effort for job related and social integration initiatives thus having positive performance outcomes. In addition, successful interaction and adjustment will in turn positively influence expatriates’ contextual performance, which can be considered an important element that can spur task performance. The gist of this research is to emphasise going back to the basics, i.e., no matter how experienced expatriates are, they will still face fear of the unknown and these feelings of anxiety and uncertainty may hamper their chances of adjusting well to the new environment and may affect their work performance. By being culturally intelligent, expatriates are therefore more open to new possibilities. They treat cultural differences as an opportunity to immerse themselves in the new environment and ensuring that cultural mistakes are minimised. Despite the efforts to ensure this study was carried out meticulously, there are some limitations that might affect its contributions and generalisability. The most significant is the sample size which is relatively small compared to the number of constructs and proposed relationships. A larger sample would enable a more rigorous analysis using Structural Equation Modelling to test the respective sub-hypotheses and there would be less concern on the strain of sample size-parameter. Secondly, this study is a cross-sectional study thus causality could not be inferred. The cross-sectional nature of the data used restricts conclusions to those of association and not causation. A more beneficial investigation of expatriate adjustment would be possible through a longitudinal study. Such a method would be important to show whether as time progresses, with more exposure to cultural interactions and being culturally intelligent, social interaction with the host country nationals would improve over time. The usage of self-rated performance in a cross-sectional study would increase the possibility of common method variance (CMV) where both the dependent and focal explanatory variables are perceptual measures derived from the same respondent (Podsakoff & Organ, 1986). Therefore, future research should endeavour to utilise the four approaches suggested by Podsakoff et al. (2003) to address CMV related issues which include different sources of information for key measures, procedural remedies when designing and administering questionnaires, complicated specifications of regressions models and statistical remedies like post hoc Harman one-factor analysis to detect and control any possible CMV. Though the effect of CMV cannot be completely ruled out for this research, every effort was made to tackle it. This included the design of the questionnaires in a manner to reduce the CMV effect through the positioning of dependent variables subsequent to the independent variables, the usage of many different types of measures and the rather exhaustive data gathering process for a single respondent due to the large length of the questionnaires (see Richardson et al., 2009). Finally, these findings can only be generalised to the countries that have similar cultural background, i.e., South East Asian countries, such as Malaysia. However, it is interesting to see whether the same model could be replicated to the Western context.