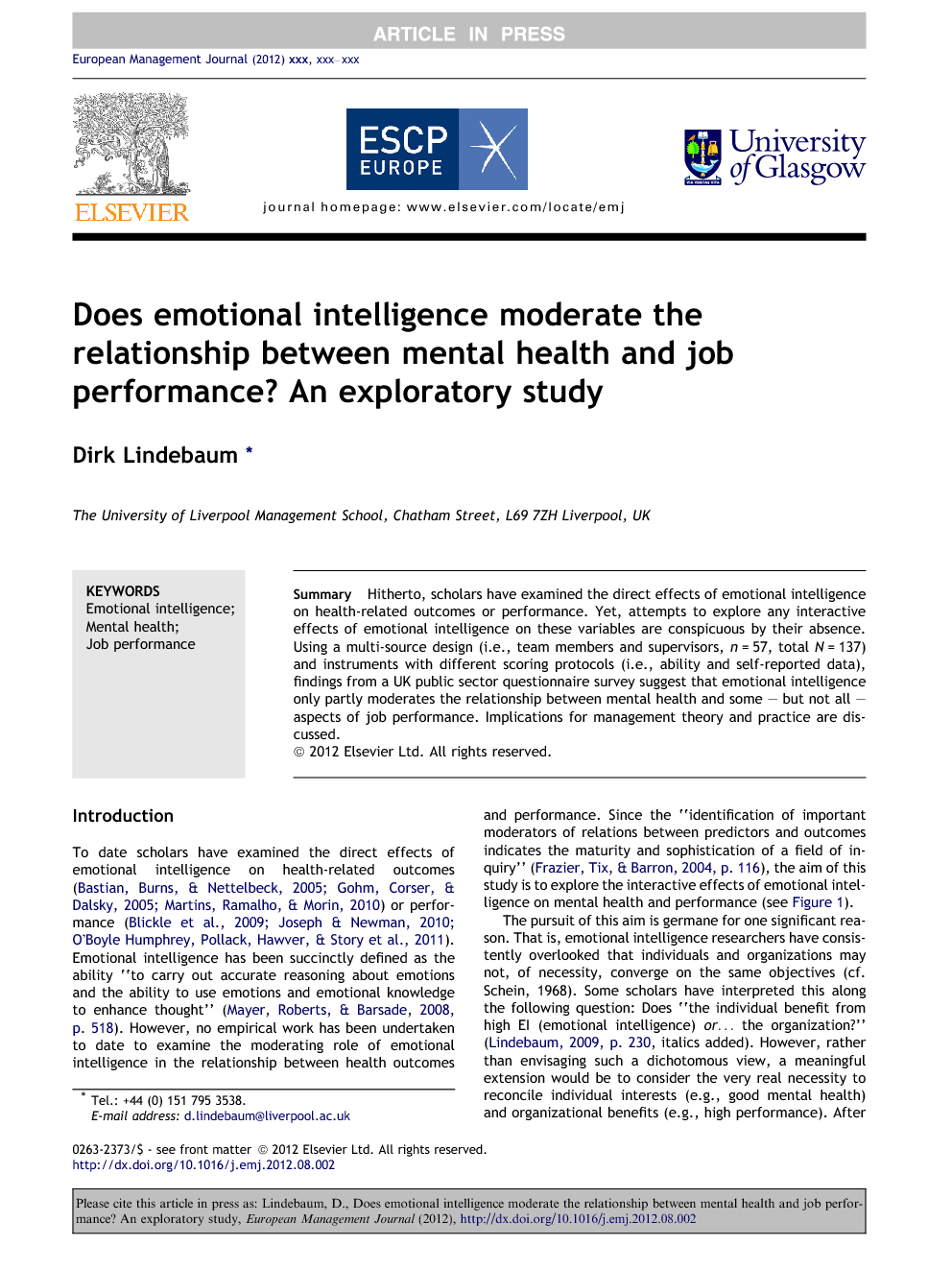 Hitherto, scholars have examined the direct effects of emotional intelligence on health-related outcomes or performance. Yet, attempts to explore any interactive effects of emotional intelligence on these variables are conspicuous by their absence. Using a multi-source design (i.e., team members and supervisors, n = 57, total N = 137) and instruments with different scoring protocols (i.e., ability and self-reported data), findings from a UK public sector questionnaire survey suggest that emotional intelligence only partly moderates the relationship between mental health and some – but not all – aspects of job performance. Implications for management theory and practice are discussed.

To date scholars have examined the direct effects of emotional intelligence on health-related outcomes (Bastian et al., 2005, Gohm et al., 2005 and Martins et al., 2010) or performance (Blickle et al., 2009, Joseph and Newman, 2010 and O’Boyle et al., 2011). Emotional intelligence has been succinctly defined as the ability “to carry out accurate reasoning about emotions and the ability to use emotions and emotional knowledge to enhance thought” (Mayer, Roberts, & Barsade, 2008, p. 518). However, no empirical work has been undertaken to date to examine the moderating role of emotional intelligence in the relationship between health outcomes and performance. Since the “identification of important moderators of relations between predictors and outcomes indicates the maturity and sophistication of a field of inquiry” (Frazier, Tix, & Barron, 2004, p. 116), the aim of this study is to explore the interactive effects of emotional intelligence on mental health and performance (see Figure 1).The pursuit of this aim is germane for one significant reason. That is, emotional intelligence researchers have consistently overlooked that individuals and organizations may not, of necessity, converge on the same objectives (cf. Schein, 1968). Some scholars have interpreted this along the following question: Does “the individual benefit from high EI (emotional intelligence) or… the organization?” (Lindebaum, 2009, p. 230, italics added). However, rather than envisaging such a dichotomous view, a meaningful extension would be to consider the very real necessity to reconcile individual interests (e.g., good mental health) and organizational benefits (e.g., high performance). After all, individuals are more likely to perform well over longer periods of time if they are in good mental health (Judge & Kammeyer-Mueller, 2008). It is thus pertinent to explore whether individuals use emotional intelligence to safeguard their mental health and perform well. In other words, is mental health associated with performance also in interaction with high emotional intelligence? For the sake of clarity, the following definitions of mental health and performance are adopted, respectively. While health has also been defined in terms of its physical, social functioning, or role functioning components (see Gross and Muñoz, 1995 and Ware, 1987, for reviews), a specific focus upon mental health is more relevant for this study. This is attributed to a mounting concern over increased mental health problems in the working population (WHO, 2002). Thus, mental health is defined as being able “to work creatively and productively…, to feel comfortable when alone, usually be developing a rich and fulfilling inner life” (Gross & Muñoz, 1995, p. 155). This also implies a feeling of integration and self-cohesion, which may contribute to resilience and can help prevent drifting into destructive relationships (Gross & Muñoz, 1995). In this respect, the personality trait of neuroticism offers an appropriate theoretical lens through which to study mental health in the present context. It is characterized by “a broad dimension of individual differences in the tendency to experience negative, distressing emotions and to possess associated behavioral and cognitive traits” (Costa & McCrae, 1987, p. 301). Myriad empirical studies show that neuroticism is related to poorer mental health, including negative affect (Bagby and Rector, 1998 and Hull et al., 1995), anxiety, (Gershuny, Sher, Rossy, & Bishop, 2000), and a dispositional factor for depression (Petersen, Bottonari, Alpert, Fava, & Nierenberg, 2001)1. In terms of performance at work, how individuals perform habitually refers to the degree to which they help organizations reach their goals. Yet, studies have shown that performance should be further distinguished into task as well as contextual performance (see Law, Wong, & Song, 2004). Specifically, task performance is defined as “proficiency in job-specific tasks”, whereas contextual performance is defined as “a set of interpersonal and volitional behaviors that support the social and motivational context in which organizational work is accomplished” (Van Scotter & Motowidlo, 1996, p. 525). Although these findings must be regarded as preliminary for reasons detailed later, they will be intrinsically relevant to scholars and practitioners in the field of management due to their longstanding interest in health issues and how they can affect individual performance at work (e.g., Walsh, 2011).

This study found preliminary evidence that emotional intelligence moderates the relationship between mental health and job performance (i.e., job dedication as one dimension of contextual performance). In other words, there is a positive relationship between mental health and job dedication when emotional intelligence is high, but not low. However, when controlling for the two different organizations, gender, age and weekly hours worked, the significant effects disappeared. On the whole, the fact that the post hoc analysis also yielded a significant effect despite the controls applied underlines both the preliminary nature of the findings, and the imperative to replicate this study to be able to draw firmer conclusions. In light of the resources that organizations potentially squander by ignoring that individuals often have to balance concerns for their mental health and performance, this study offers some meaningful initially steps en route to further empirical investigation to either falsify or verify these findings.