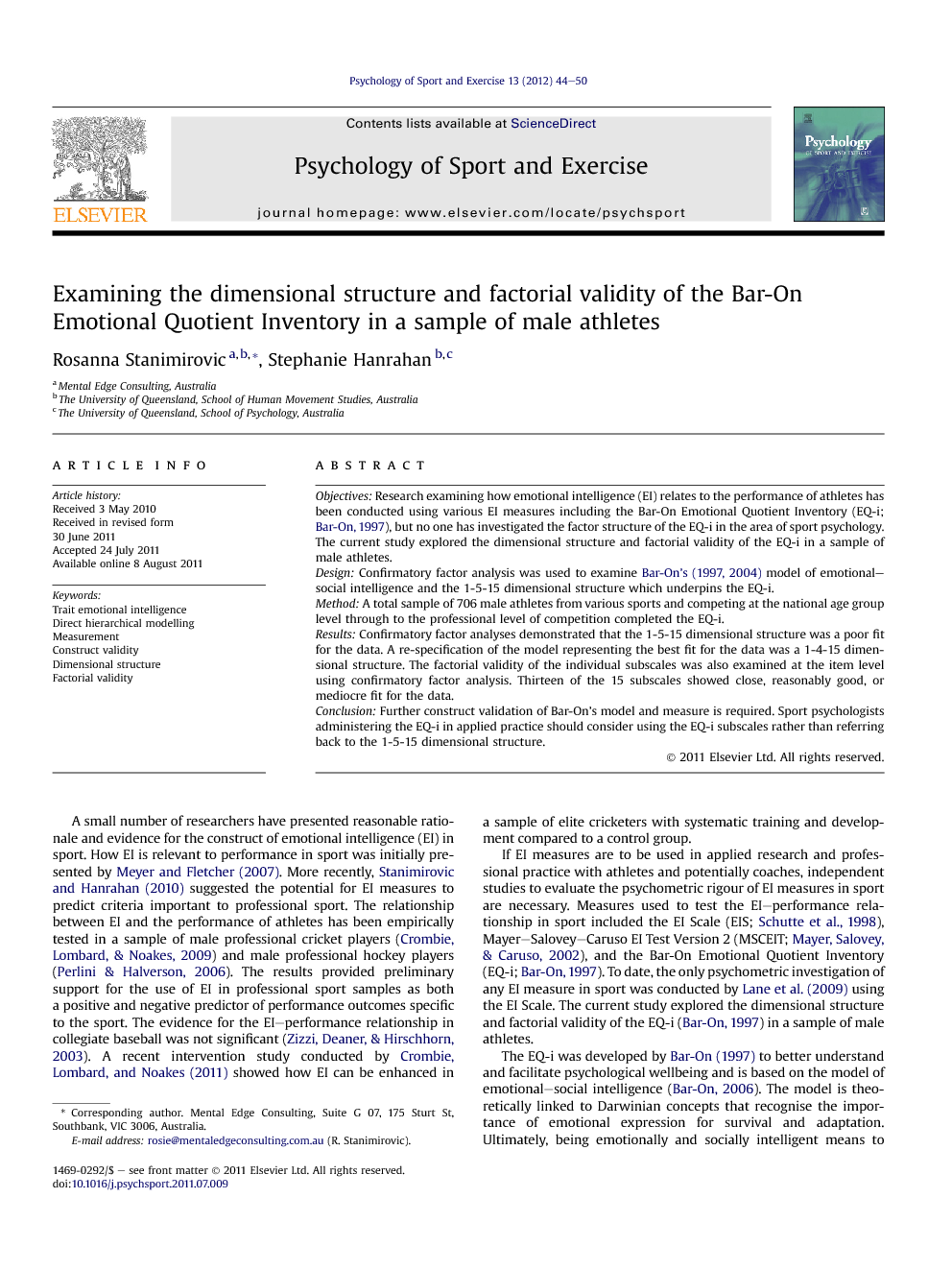 Objectives Research examining how emotional intelligence (EI) relates to the performance of athletes has been conducted using various EI measures including the Bar-On Emotional Quotient Inventory (EQ-i; Bar-On, 1997), but no one has investigated the factor structure of the EQ-i in the area of sport psychology. The current study explored the dimensional structure and factorial validity of the EQ-i in a sample of male athletes. Design Confirmatory factor analysis was used to examine Bar-On, 1997 and Bar-On, 2004 model of emotional–social intelligence and the 1-5-15 dimensional structure which underpins the EQ-i. Method A total sample of 706 male athletes from various sports and competing at the national age group level through to the professional level of competition completed the EQ-i. Results Confirmatory factor analyses demonstrated that the 1-5-15 dimensional structure was a poor fit for the data. A re-specification of the model representing the best fit for the data was a 1-4-15 dimensional structure. The factorial validity of the individual subscales was also examined at the item level using confirmatory factor analysis. Thirteen of the 15 subscales showed close, reasonably good, or mediocre fit for the data. Conclusion Further construct validation of Bar-On’s model and measure is required. Sport psychologists administering the EQ-i in applied practice should consider using the EQ-i subscales rather than referring back to the 1-5-15 dimensional structure.

he descriptive statistics and Cronbach α for the subscales are presented in Table 1. Cronbach α for the subscales ranged between .70 and .81. Data from Bar-On’s (1997) U.S. sample of males from the general population are also included as comparisons. Overall, the internal consistency of the subscales scores are adequate but lower than the Bar-On sample. Impulse control and self-regard show the highest level of internal consistency. The mean item correlations, covariances, and total item correlations are presented in Table 2. The mean item correlations for each of the 15 subscales ranged between .23 and 28 for all subscales except impulse control and self-regard, which had the highest scores with .31 and .32 respectively. The mean item covariation ranged between .13 and .25 for all subscales except for impulse control with .31.The data were screened for outliers and normality and were considered appropriately distributed for the purposes of maximum likelihood estimation. Curran, West, and Finch (1996) recommended that for CFA, variables with an absolute value greater than 2 for skewness or 7 for kurtosis should be transformed to improve the distribution of scores. No variables met the recommended criteria and hence no variables were transformed. The direct hierarchical model for the 1-5-15 dimensional structure was a poor fit, χ2 = 1170.29 (df = 77, N = 700), p < .05, and SRMR = .083, RMSEA = .143, CFI = .790, TLI = .713. The factor loadings are presented in Table 3. The general factor was associated with factor loadings ranging in size from .30 to .79, which were significant. The factor loadings for the subscales self-regard and self-actualisation were not significant. Self-actualisation and optimism had differentially directed loadings (see Table 3), suggesting the subscales were not associated with sufficient unique covariation when related to the composite scale. An additional five subscales showed factor loadings of less than .30 to the representative composite scale. Overall, the results demonstrated that the 1-5-15 dimensional structure of the EQ-i as suggested by Bar-On (1997) was not stable. The re-specification of the model representing the best fit for the data was a 1-4-15 dimensional structure, χ2 = 524.12 (df = 67, N = 700), p < .05, and SRMR = .053, RMSEA = .099, CFI = .912, TLI = .862. The factor loadings are presented in Table 4 and demonstrated that the dimensional structure was also not stable due to the number of differentially directed loadings to composite scales.Of the 130 items directly contributing to subscale scores in the EQ-i, 64 (49.23%) items are reversed scored. DiStefano and Motl (2006) and Gignac (2010) assessed the effects of negatively worded items by including a nested factor to which negatively worded items are loaded. To further examine the factorial validity of the EQ-i subscales a direct hierarchical model of each subscale was conducted using CFA and included a latent variable to which reverse scored items loaded. The fit indices for the 1-5-15 model, best fit for data model, and 15 subscales analysed in the current study are included in Table 5.The subscales showed close fit (i.e., assertiveness, self-actualisation, reality testing, and problem solving), reasonably good fit (i.e., social responsibility, stress tolerance, flexibility, optimism) and mediocre fit (i.e., self-regard, emotional self-awareness, independence, empathy, interpersonal relationship). The impulse control and happiness subscales showed unacceptable fit and require further examination.