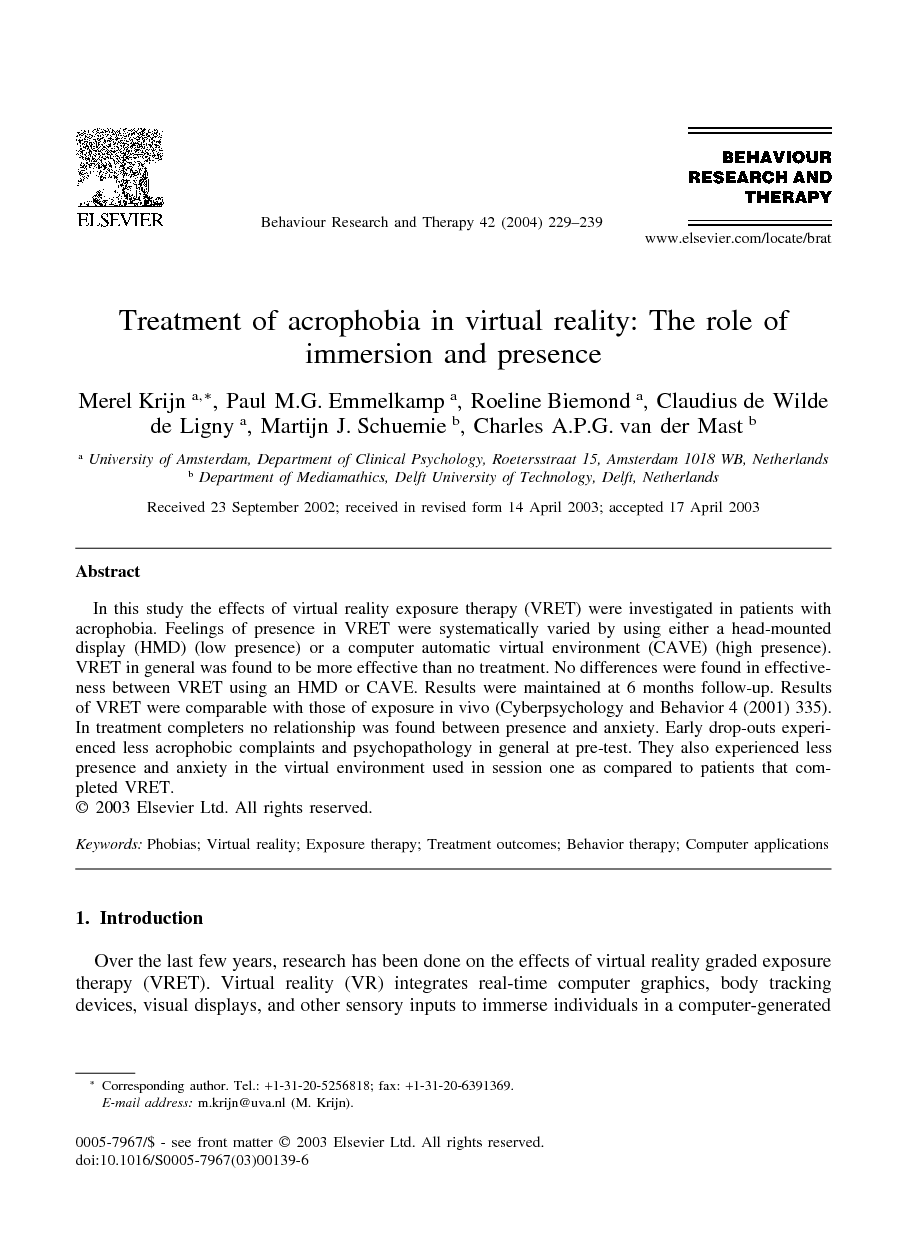 In this study the effects of virtual reality exposure therapy (VRET) were investigated in patients with acrophobia. Feelings of presence in VRET were systematically varied by using either a head-mounted display (HMD) (low presence) or a computer automatic virtual environment (CAVE) (high presence). VRET in general was found to be more effective than no treatment. No differences were found in effectiveness between VRET using an HMD or CAVE. Results were maintained at 6 months follow-up. Results of VRET were comparable with those of exposure in vivo (Cyberpsychology and Behavior 4 (2001) 335). In treatment completers no relationship was found between presence and anxiety. Early drop-outs experienced less acrophobic complaints and psychopathology in general at pre-test. They also experienced less presence and anxiety in the virtual environment used in session one as compared to patients that completed VRET.

Over the last few years, research has been done on the effects of virtual reality graded exposure therapy (VRET). Virtual reality (VR) integrates real-time computer graphics, body tracking devices, visual displays, and other sensory inputs to immerse individuals in a computer-generated virtual environment. In VRET patients are exposed to virtual anxiety provoking environments instead of real anxious situations. Few controlled studies have evaluated the effectiveness of VRET on specific phobias. Rothbaum, Hodges, Smith, Lee and Price (2000) investigated the effectiveness of VRET compared to standard exposure (SE) or a waiting period (WP) for patients fearful of flying. VRET and SE both included four sessions in which the rationale was explained and breathing techniques, cognitive restructuring and thought stopping was learned. The next four sessions differed between conditions: VRET concentrated on virtual exposure to (a) sitting in the airplane, (b) experiencing take-offs and (c) landings and (d) flying in different weather-types. SE concentrated on real exposure to the airport and pre-flight stimuli and exposure to a stationary airplane. VRET was found to be as effective as SE and both treatments were more effective than a waiting period. Gains maintained during treatment remained stable at 6- and 12-month follow-up (Rothbaum, Hodges, Smith, Lee and Price, 2000 and Rothbaum, Hodges, Anderson, Price and Smith, 2002). No conclusions can be drawn about the effectiveness of the VR exposure component by itself, unfortunately. Mühlberger, Herrmann, Wiedemann, Ellgring and Pauli (2001) have also conducted a controlled study on the effectiveness of VRET on fear of flying. Four exposures of 16 min to a virtual flight were compared to relaxation training in a between-group design. Before and after treatment questionnaires and a virtual test flight were given to investigate the treatment effectiveness. Results of this study indicate that VRET was able to elicit fear responses in phobics (measured by SUDS, heart rate and skin-conductance), and these responses decreased within exposures and across repeated exposures. The reduction in fear responses induced by four VR exposure flights was comparable to or even greater than achieved with relaxation training. These two studies indicate that VRET can be an effective component in the treatment of flight phobia. All other studies with multiple subjects have been conducted on acrophobia. The first study was done with students randomly assigned to either VRET or a waiting list control group (Rothbaum et al., 1995). VRET was found to be more effective than a waiting period without treatment. In another study on acrophobia (Emmelkamp, Bruynzeel, Drost & van der Mast, 2001) 10 patients were first treated with two sessions of VRET and afterwards with two sessions of exposure in vivo, the golden standard of treatment of phobias. VRET was found to be as effective as exposure in vivo. No firm conclusions could be drawn however, because of the order effect (first VRET than exposure in vivo). In the second study by the same research group a between group design was used (Emmelkamp et al., 2002). Acrophobic patients were treated either with VRET or exposure in vivo. The exact same locations used in exposure in vivo were used in virtual reality to create an optimal comparison between the two kinds of treatment. A significant decline in anxiety and (behavioural) avoidance was found for both three-session treatments. There were no differences in effectiveness. The results remained stable at 6-month follow-up. However, in these earlier clinical studies, no-treatment control groups were lacking. VRET is based on the assumption that people feel ‘present’ in the virtual environment. Presence is defined as ‘a psychological state or subjective perception in which, even though part or all of an individual’s current experience is generated by and/or filtered through human-made technology, part or all of the individual’s perception fails to accurately acknowledge the role of the technology in the experience. Except in the most extreme cases, the individual can indicate correctly that s/he is using the technology, but at “some level” and to “some degree”, her/his perceptions overlook that knowledge and objects, events, entities and environments are perceived as if the technology was not involved in the experience’ (Lombard, 2000). It is held that only if a patient has the feeling to be more present in the virtual anxiety-provoking environment than in the real environment, s/he can experience anxiety. Immersion, the objective qualification of the VR-equipment, is of influence on presence (Schubert, Friedmann, & Regenbrecht, 2001). The aim of the present experimental study was to compare the effectiveness of two kinds of pure virtual reality exposure therapy in a between group design with acrophobic patients. A waiting list control group was added to examine the effect of time on the severity of acrophobia. Relatively cheap VR-equipment using a normal PC with head-mounted display (HMD) was used for treatment in one condition. This was compared to VRET using a very advanced computer automatic virtual environment (CAVE). It was predicted that the degree of presence would be significantly higher using the CAVE-type system than by using the HMD. Furthermore, it was investigated if higher presence would lead to more effective treatment.