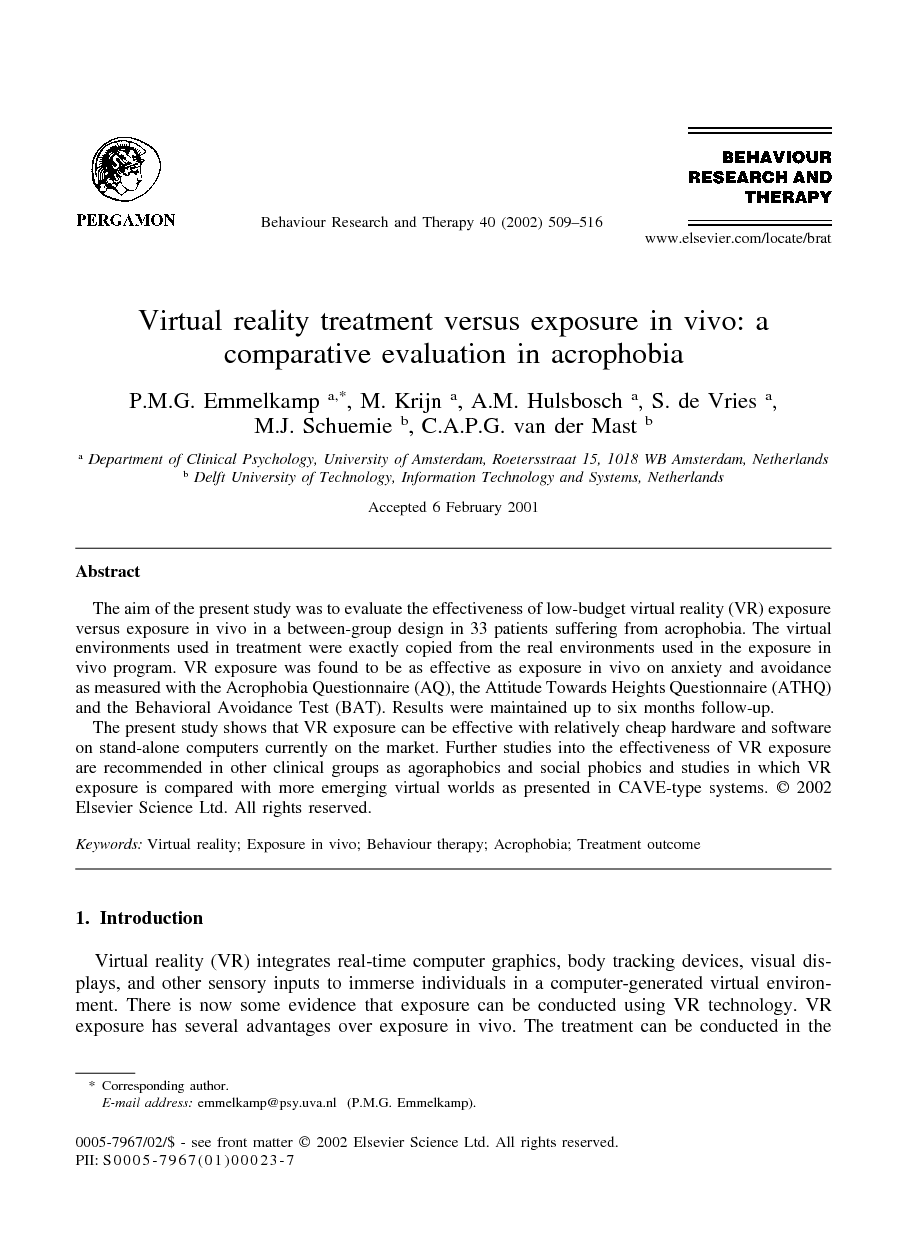 The aim of the present study was to evaluate the effectiveness of low-budget virtual reality (VR) exposure versus exposure in vivo in a between-group design in 33 patients suffering from acrophobia. The virtual environments used in treatment were exactly copied from the real environments used in the exposure in vivo program. VR exposure was found to be as effective as exposure in vivo on anxiety and avoidance as measured with the Acrophobia Questionnaire (AQ), the Attitude Towards Heights Questionnaire (ATHQ) and the Behavioral Avoidance Test (BAT). Results were maintained up to six months follow-up. The present study shows that VR exposure can be effective with relatively cheap hardware and software on stand-alone computers currently on the market. Further studies into the effectiveness of VR exposure are recommended in other clinical groups as agoraphobics and social phobics and studies in which VR exposure is compared with more emerging virtual worlds as presented in CAVE-type systems.

Virtual reality (VR) integrates real-time computer graphics, body tracking devices, visual displays, and other sensory inputs to immerse individuals in a computer-generated virtual environment. There is now some evidence that exposure can be conducted using VR technology. VR exposure has several advantages over exposure in vivo. The treatment can be conducted in the therapist office rather than that therapist and patient have to go outside to do the exposure exercises in real phobic situations and hence treatment may be more cost-effective than therapist-assisted exposure in vivo. Further, VR treatment can also be applied on patients who are too anxious to undergo real-life exposure in vivo. A few case studies have been reported demonstrating the effectiveness of exposure provided by VR. Such case studies have been reported on fear of flying (North, North & Coble, 1997; Rothbaum, Hodges, Watson, Kessler, & Opdyke, 1996), acrophobia (Rothbaum et al., 1995a), claustrophobia (Botella et al., 1998), spider phobia (Carlin, Hofman, & Weghorst, 1997) and agoraphobia (Coble, North, & North, 1995). To date, two controlled studies have been reported. In a study on college students with fear of heights seven weekly sessions of VR exposure, conducted with a rather expensive laboratories computer, was found to be more effective than no-treatment control (Rothbaum et al., 1995b). Emmelkamp, Bruynzeel, Drost, and van der Mast (2001) evaluated the effectiveness of two sessions of low-budget VR versus two sessions of exposure in vivo in a within group design in individuals suffering from acrophobia. VR exposure was found to be at least as effective as exposure in vivo on anxiety and avoidance. The results of the Emmelkamp et al. (2002) study show that VR exposure can be effective with relatively cheap hardware and software on stand-alone computers currently on the market. This suggests that VR exposure will come within reach of the ordinary practitioner within the next few years. In the Emmelkamp et al. (2002) study all patients received VR exposure as first treatment. We did not counterbalance both treatments because we expected a ceiling effect after two sessions of exposure in vivo (e.g. Emmelkamp & Felten, 1985), leaving insufficient room for further improvement with VR exposure. Unexpectedly, this is exactly what happened with VR exposure in the Emmelkamp et al. (submitted) study: VR exposure as first treatment was already so effective that a ceiling effect occurred thus diminishing the potential effects of exposure in vivo. Therefore, there was a clear need to replicate the findings in a between-group design. The aim of the present study was to compare the effectiveness of exposure in vivo versus VR exposure in a between-group design with acrophobic patients. In order to enhance the comparability of exposure environments, locations, which were used in the exposure in vivo program, were exactly reproduced in virtual worlds that were used in VR exposure. Further, until now the evaluation of the effects of VR exposure has been restricted to self-report. In the present study, we also included a Behavioral Avoidance Test (BAT) in order to examine whether the effects of VR exposure generalise to real-life situations. Finally, the long-term effects of VR exposure have not yet been reported. Therefore, in the present study a follow-up was held six months after treatment, in order to investigate the long-term results of treatment.