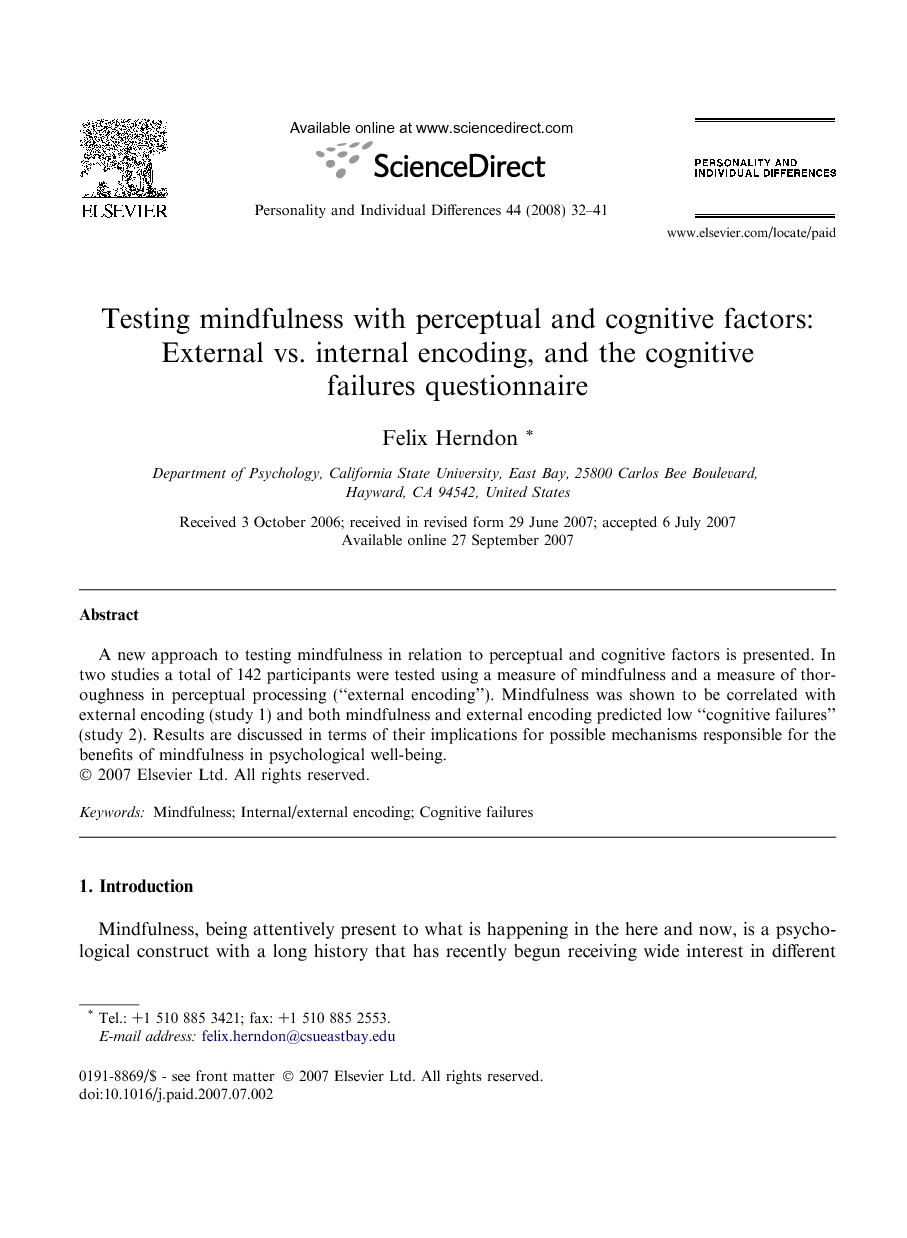 Mindfulness, being attentively present to what is happening in the here and now, is a psychological construct with a long history that has recently begun receiving wide interest in different areas in psychology. The primary area of interest has been in applied clinical psychology (e.g., Kabat-Zinn, 2000, Linehan, 1993 and Segal et al., 2002), but interest has rapidly begun to emerge in social and personality psychology and other areas of research (Baer et al., 2004, Brown and Ryan, 2003 and Walach et al., 2006). A number of scales to measure mindfulness have now been tested (e.g., Baer et al., 2004, Bodner and Langer, 2001 and Brown and Ryan, 2003). Measures of mindfulness have been shown to positively correlate with a variety of characteristics related to psychological well-being (e.g., positive affect and vitality, Brown & Ryan, 2003; emotional intelligence, Baer, Smith, Hopkins, Krietemeyer, & Toney, 2006) and negatively correlate with characteristics related to lack of well-being (e.g., depression, neuroticism, and anxiety, Brown & Ryan; alexithymia and experiential avoidance, Baer et al., 2006). Here possible reasons for these correlations will be discussed and support will be presented for one possible explanation that has not previously been considered in relation to mindfulness. As will be seen, some of the increase in well-being related to mindfulness may be due to a relatively more thorough attention to the external environment that Lewicki (2005) calls “external encoding”. One issue among mindfulness researchers is the relative internal vs. external focus of mindfulness. Some theorist suggest that mindfulness is constituted by a single factor, present awareness, which is balanced between internal and external awareness ( Brown and Ryan, 2003 and Brown and Ryan, 2004). Other theorists (e.g., Baer et al., 2004, Baer et al., 2006 and Bishop et al., 2004) suggest an additional, internally focused factor, acceptance. In this second factor the well-being benefits of mindfulness are ascribed to accepting “thoughts and emotions as they arise, without judging (or) evaluating” them ( Baer, 2003, p. 128). These benefits are thus clearly claimed as accruing to mindfulness as “attention to primarily internal stimuli” ( Bishop et al., 2004, p. 235). If the well-being benefits of mindfulness could be shown as likely due to attention to external stimuli, then, this would lend support to Brown and Ryan’s present awareness factor. The current research is intended to show that at least some of the well-being benefits of mindfulness may accrue not because of greater attention to internal stimuli but rather because of relatively greater attention to external stimuli. It is not hard to suggest why this assertion may be true. In commenting on the negative correlation they found between mindfulness and neuroticism, Brown and Ryan (2003) state that “the inverse relation between them is, in fact, meaningful. That is, neuroticism, including worry, (public) self-consciousness, and other features can preclude mindfulness; conversely the inculcation of awareness of self and others … may lead to a reduction in neurotic tendencies” (2003, p. 832). Both worry and the kind of public self-consciousness Brown and Ryan are referring to (Fenigstein, Scheier, & Buss, 1975, self-consciousness scale) involve mainly internally-directed attention. Other things being equal, paying relatively more attention to external events would lessen the amount of this kind of internally-directed attention and, thus, lessen neuroticism. Consistent with this, a wide variety of research has supported the connection between self-focused attention and negative affect in general (Mor and Winquist, 2002 and Watson and Pennebaker, 1989). What remains is to test whether mindful people do indeed pay relatively more attention to the external environment than the average person does. This is done in study 1, using a measure of external encoding developed by Lewicki (2005).