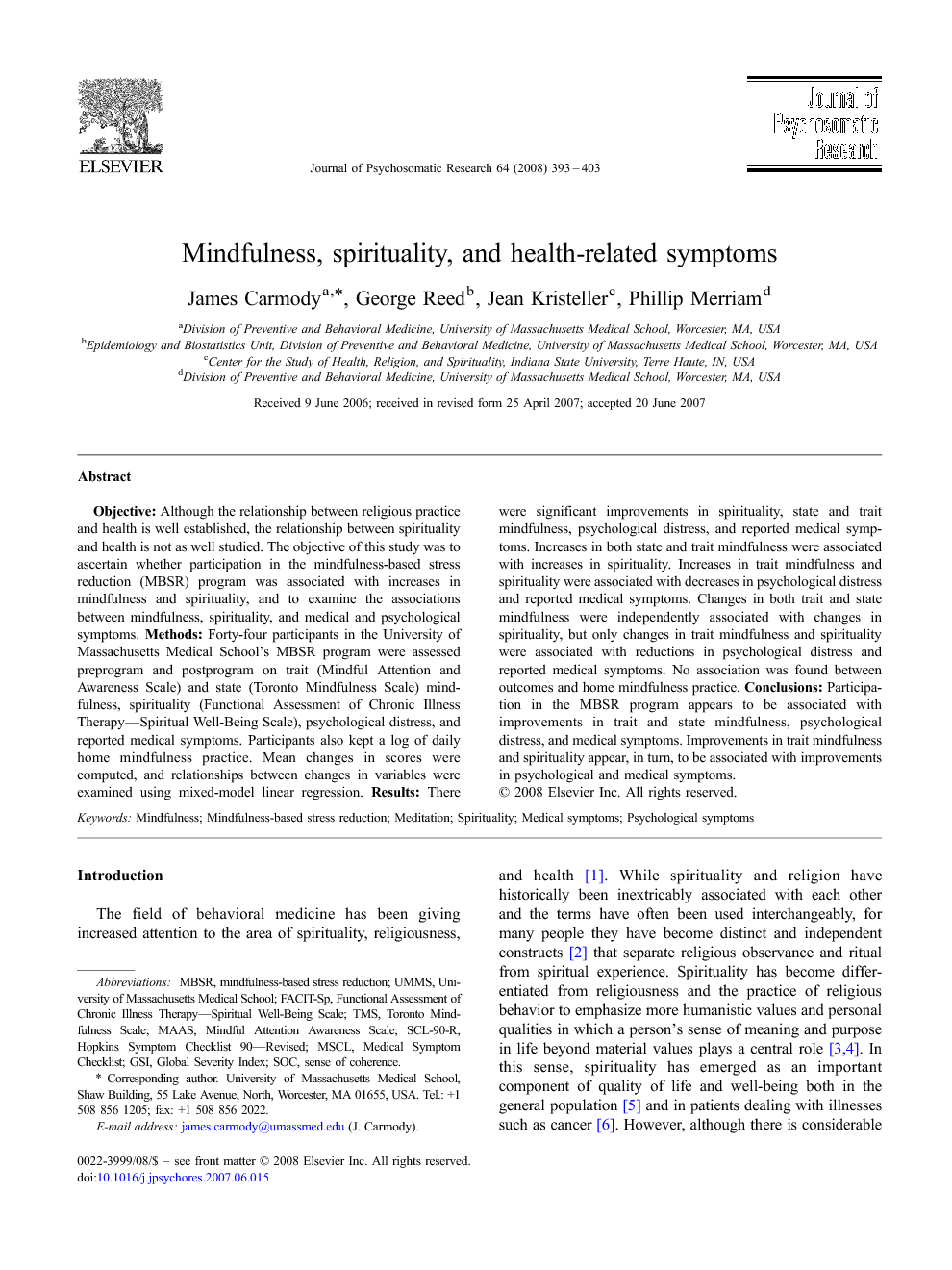 The field of behavioral medicine has been giving increased attention to the area of spirituality, religiousness, and health [1]. While spirituality and religion have historically been inextricably associated with each other and the terms have often been used interchangeably, for many people they have become distinct and independent constructs [2] that separate religious observance and ritual from spiritual experience. Spirituality has become differentiated from religiousness and the practice of religious behavior to emphasize more humanistic values and personal qualities in which a person's sense of meaning and purpose in life beyond material values plays a central role [3] and [4]. In this sense, spirituality has emerged as an important component of quality of life and well-being both in the general population [5] and in patients dealing with illnesses such as cancer [6]. However, although there is considerable evidence of the beneficial effect of religiosity on health and longevity [7], [8] and [9], the relationship between spirituality (independent of religious practice) and health is not as well studied [2] and [10]. All religious traditions maintain that spirituality can be developed through training, but the secular nature of many people's lives, together with the fact that 82% of Americans express a need for greater spiritual growth [2], makes it important to ascertain whether spirituality can be developed other than through traditional religious practice. Further, since such an approach would differ from the religious behaviors associated with greater health, it is important also to determine whether changes in spirituality also are related to health. Mindfulness has its roots in Buddhism and is a practice that has long been associated with spiritual development [11] and [12]. It has been defined as intentionally paying attention to present-moment experience (physical sensations, perceptions, affective states, thoughts, and imagery) in a nonjudgmental way, thereby cultivating a stable and nonreactive awareness [13] and [14]. Mindfulness meditation is the practice that has been traditionally used for the systematic development of mindfulness. The mindfulness-based stress reduction (MBSR) program provides instructions in mindfulness meditation in a secular context, without the Buddhist cultural and religious overlay. The program has been intentionally designed to give instructions and practice in the integration of mindfulness into everyday life as support in dealing with stressful life situations [15]. Participants learn that attention can be brought to notice whatever thoughts, feelings, and sensations are appearing in awareness, while at the same time remaining aware of the capacity to maintain the focus of attention on these contents without moving toward maladaptive conditioned reactivity or attention deliberately redirected to a wider field of awareness or to a different object. A recent meta-analysis of controlled and observational studies of the health benefits of the MBSR program [14] found that it was useful for patients with a broad range of chronic disorders, and the reported changes in distress have been found to endure on 3-month [16], 6-month [17], 3-year [13], and 4-year [18] follow-ups. It has been suggested that a capacity to bring mental processes under greater voluntary control and directing them in beneficial ways gives the person a greater sense of control [19]. When thoughts and feelings no longer threaten to overwhelm the person [20] and [21], psychological and physical well-being is fostered by allowing for the emergence of alternative responses. Furthermore, the development of this openness and acceptance of present-moment experience, coupled with nonreactive self-observation and capacity for choosing the focus of attention fostered by mindfulness, may in turn be valuable in self-regulatory behavior that is consistent with the person's wider needs and values [22]. While a considerable body of published research reports the health-related benefits of participating in mindfulness training through interventions based on the MBSR program [14], the need to confirm mindfulness as a critical component of change has resulted in the publication of operational definitions and several scales purporting to assess mindfulness [23], [24], [25] and [26]. In its original descriptions, mindfulness is a subtle notion and the most appropriate method of assessment, including whether it is possible validly to assess it using paper-and-pencil tests remains a topic of debate [27]. In the spirit of this open question, exploring scores on different scales from the same sample provides an opportunity to determine whether similar estimates of mindfulness result and also begins an examination of the possible relationship of mindfulness with existing psychological constructs. The aim of the present study was to ascertain whether participation in the MBSR program is associated with increases in mindfulness and spirituality, and to examine the associations between changes in mindfulness, spirituality, and self-reported medical and psychological symptoms.