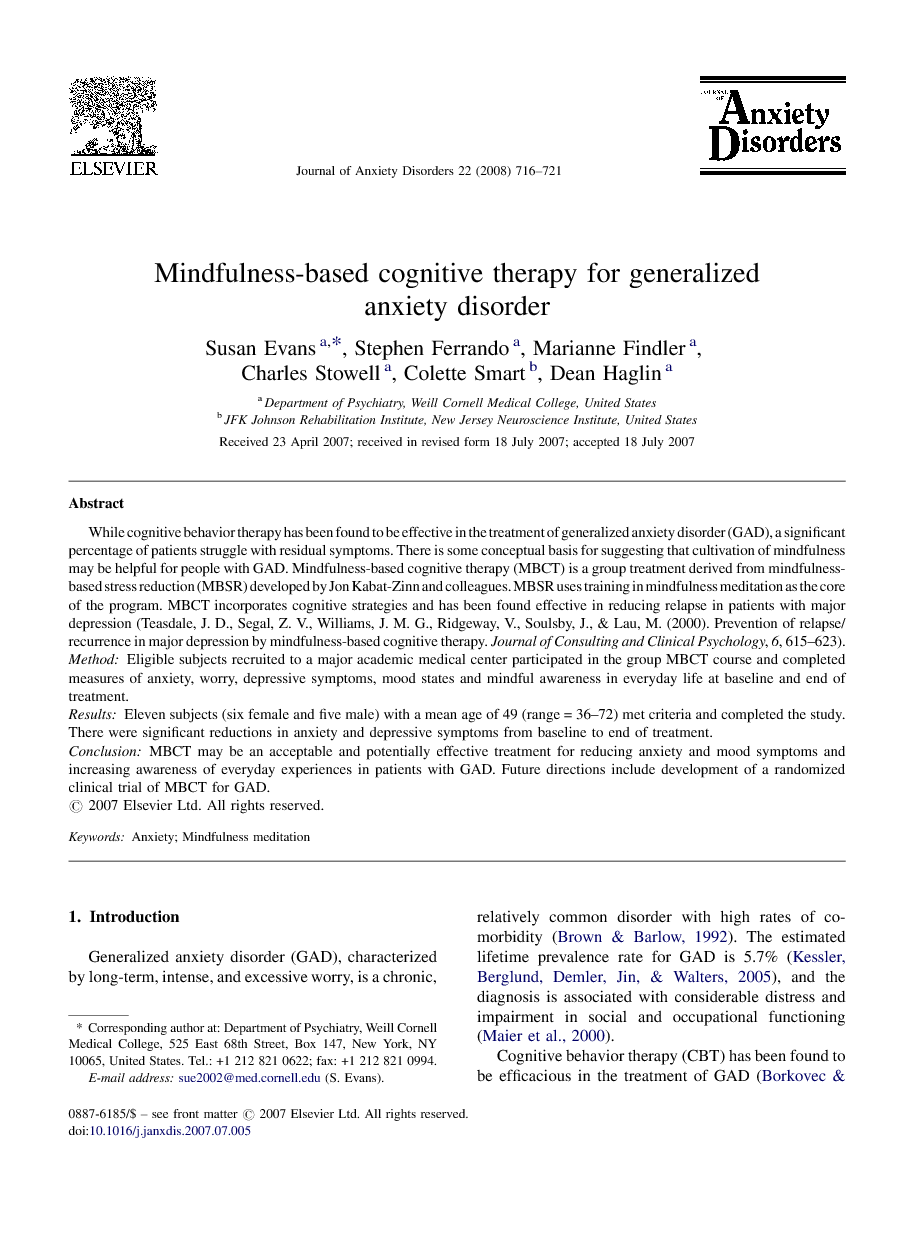 While cognitive behavior therapy has been found to be effective in the treatment of generalized anxiety disorder (GAD), a significant percentage of patients struggle with residual symptoms. There is some conceptual basis for suggesting that cultivation of mindfulness may be helpful for people with GAD. Mindfulness-based cognitive therapy (MBCT) is a group treatment derived from mindfulness-based stress reduction (MBSR) developed by Jon Kabat-Zinn and colleagues. MBSR uses training in mindfulness meditation as the core of the program. MBCT incorporates cognitive strategies and has been found effective in reducing relapse in patients with major depression (Teasdale, J. D., Segal, Z. V., Williams, J. M. G., Ridgeway, V., Soulsby, J., & Lau, M. (2000). Prevention of relapse/recurrence in major depression by mindfulness-based cognitive therapy. Journal of Consulting and Clinical Psychology, 6, 615–623). Method Eligible subjects recruited to a major academic medical center participated in the group MBCT course and completed measures of anxiety, worry, depressive symptoms, mood states and mindful awareness in everyday life at baseline and end of treatment. Results Eleven subjects (six female and five male) with a mean age of 49 (range = 36–72) met criteria and completed the study. There were significant reductions in anxiety and depressive symptoms from baseline to end of treatment. Conclusion MBCT may be an acceptable and potentially effective treatment for reducing anxiety and mood symptoms and increasing awareness of everyday experiences in patients with GAD. Future directions include development of a randomized clinical trial of MBCT for GAD.

Generalized anxiety disorder (GAD), characterized by long-term, intense, and excessive worry, is a chronic, relatively common disorder with high rates of co-morbidity (Brown & Barlow, 1992). The estimated lifetime prevalence rate for GAD is 5.7% (Kessler, Berglund, Demler, Jin, & Walters, 2005), and the diagnosis is associated with considerable distress and impairment in social and occupational functioning (Maier et al., 2000). Cognitive behavior therapy (CBT) has been found to be efficacious in the treatment of GAD (Borkovec & Ruscio, 2001; Borkovec, Newman, Lytle, & Pincus, 2002; Butler, Fennell, Robson, & Gelder, 1991; Ladouceur et al., 2000). Borkovec and Ruscio (2001) point out the typical CBT approach for GAD involves training clients to detect internal and external anxiety cues and to employ strategies to manage the psychological and somatic symptoms. While CBT is effective in treating the disorder, GAD nonetheless remains the least successfully treated of the anxiety disorders (Brown, Barlow, & Liebowitz, 1994). Ninan (2001) points out that nearly twice as many patients in treatment for GAD achieve partial remission as those who achieve full remission and indicates the persistence of residual symptoms in many who respond to treatment. Roemer and Orsillo (2002) provide a conceptual understanding of integrating mindfulness and acceptance-based perspectives to the extant models and treatment of GAD. Mindfulness, moment-to-moment non-judgmental awareness, is cultivated through the regular practice of mindfulness meditation and emphasizes an open awareness to the contents of the mind. Roemer and Orsillo (2002) point out that since the nature of worry is future directed, training in present-moment mindful awareness may provide a useful alternative way of responding for individuals with GAD. Astin (1997) suggests that the techniques of mindfulness meditation help the person to develop a stance of detached observation towards the contents of consciousness and may be a useful cognitive behavioral coping strategy. The mindfulness-based stress reduction (MBSR) program developed by Jon Kabat-Zinn and his colleagues (Kabat-Zinn, 1990) at the University of Massachusetts Medical School helps individuals develop mindfulness through intensive training in mindfulness meditation. MBSR is an intensive, structured, client-centered approach that has been used successfully in a range of clinical settings, hospitals and schools. MBSR is integral to mindfulness-based cognitive therapy (MBCT; Segal, Williams, & Teasdale, 2002) which has been found useful for the prevention of relapse in depression (Teasdale et al., 2000). Some other cognitive behavioral psychotherapies, such as dialectal behavior therapy (Linehan, 1993) and acceptance and commitment therapy (Hayes, Strosahl, & Wilson, 1999), include mindfulness and acceptance strategies. Currently, there are a few non-randomized trials of MBSR for anxiety disorders (Kabat-Zinn et al., 1992; Miller, Fletcher, & Kabat-Zinn, 1995) that suggest intensive training in mindfulness meditation may be helpful in reducing anxiety. In a recent open trial of acceptance-based behavior therapy for GAD, Roemer and Orsillo (2007) found that patients who received a treatment combining CBT and learning and practicing mindfulness and acceptance-based strategies experienced significant reductions in symptoms and improvement in quality of life. However, a recent report published by the Cochrane Collaboration (Krisanaprakornkit, Krisanaprakornkit, Piyavhatkul, & Laopaiboon, 2006) raises a question as to the feasibility and acceptability of meditation based treatments for GAD. This report focused only on randomized clinical trials investigating the effectiveness of meditation for anxiety disorders. Only 2 of 50 studies, one involving transcendental meditation and the other utilizing kundalini yoga, met the rigorous inclusion criteria. Drop out rate was quite high in both studies and could suggest that the intensity and adherence to practicing regular meditation in individuals suffering from anxiety disorders may be of significant consideration. The authors concluded that the small number of studies did not permit conclusions to be drawn on the effectiveness of meditation for anxiety disorders and suggested that more trials are needed. One rationale for testing new treatments for GAD is related to the fact that despite effective therapies, the persistence of residual GAD symptoms in treatment responders is a problem. Conceptually, it makes sense that the development of mindfulness in individuals with GAD would be beneficial since a mindful state of being captures a quality of consciousness that is characterized by a clarity and vividness of current experience (Brown & Ryan, 2003). Nonetheless, practice of mindfulness meditation is demanding for anyone and may present particular challenges to individuals with GAD whose contents of mental consciousness are for most of the time oriented away from present moment to moment awareness. The purpose of the study was to investigate whether an open trial of an 8-week group mindfulness-based cognitive therapy program that focused on intensive training in mindfulness meditation and integrated principles of cognitive behavior therapy would be an acceptable and effective treatment for patients suffering from GAD.