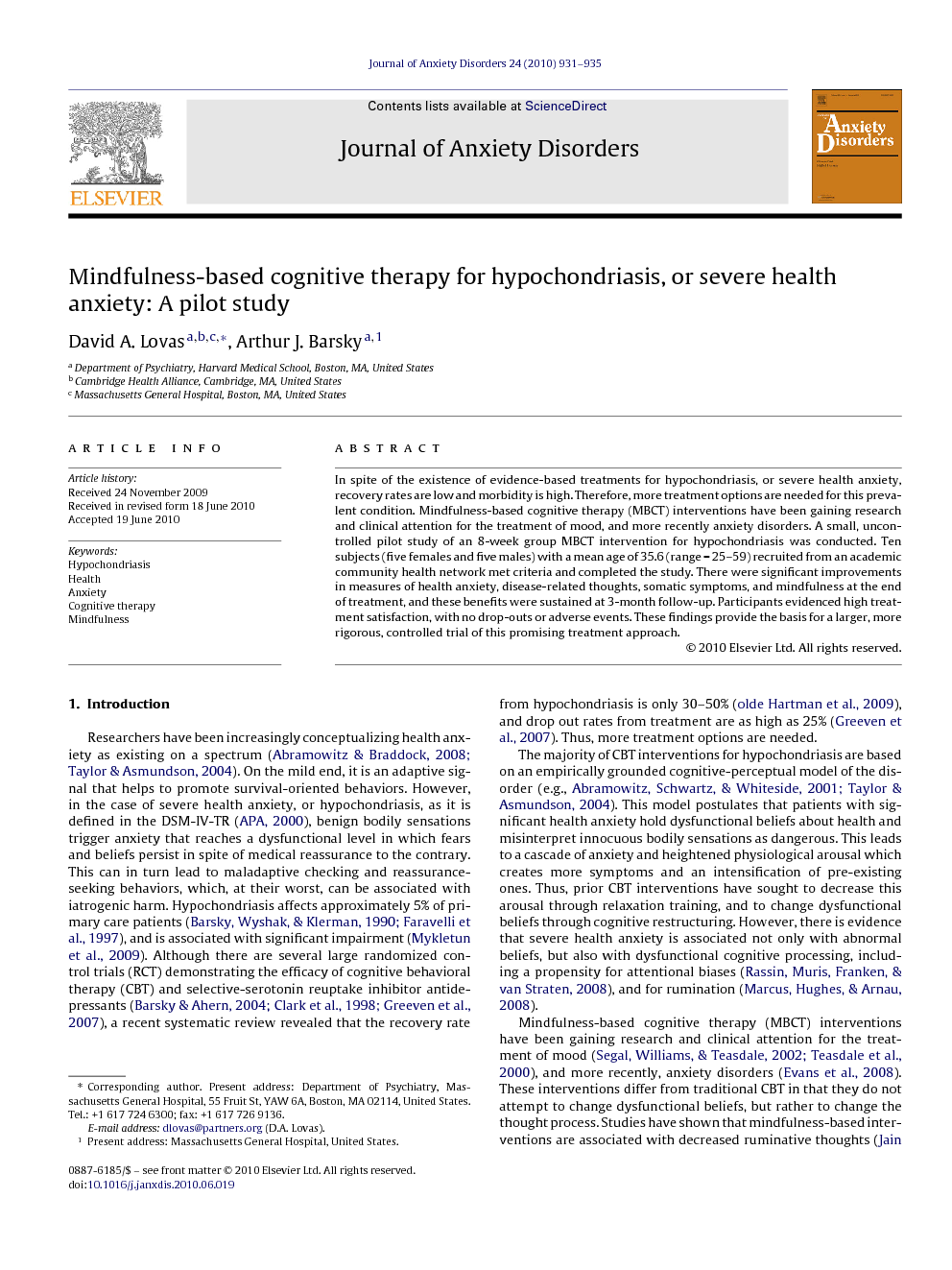 In spite of the existence of evidence-based treatments for hypochondriasis, or severe health anxiety, recovery rates are low and morbidity is high. Therefore, more treatment options are needed for this prevalent condition. Mindfulness-based cognitive therapy (MBCT) interventions have been gaining research and clinical attention for the treatment of mood, and more recently anxiety disorders. A small, uncontrolled pilot study of an 8-week group MBCT intervention for hypochondriasis was conducted. Ten subjects (five females and five males) with a mean age of 35.6 (range = 25–59) recruited from an academic community health network met criteria and completed the study. There were significant improvements in measures of health anxiety, disease-related thoughts, somatic symptoms, and mindfulness at the end of treatment, and these benefits were sustained at 3-month follow-up. Participants evidenced high treatment satisfaction, with no drop-outs or adverse events. These findings provide the basis for a larger, more rigorous, controlled trial of this promising treatment approach.

Researchers have been increasingly conceptualizing health anxiety as existing on a spectrum (Abramowitz and Braddock, 2008 and Taylor and Asmundson, 2004). On the mild end, it is an adaptive signal that helps to promote survival-oriented behaviors. However, in the case of severe health anxiety, or hypochondriasis, as it is defined in the DSM-IV-TR (APA, 2000), benign bodily sensations trigger anxiety that reaches a dysfunctional level in which fears and beliefs persist in spite of medical reassurance to the contrary. This can in turn lead to maladaptive checking and reassurance-seeking behaviors, which, at their worst, can be associated with iatrogenic harm. Hypochondriasis affects approximately 5% of primary care patients (Barsky et al., 1990 and Faravelli et al., 1997), and is associated with significant impairment (Mykletun et al., 2009). Although there are several large randomized control trials (RCT) demonstrating the efficacy of cognitive behavioral therapy (CBT) and selective-serotonin reuptake inhibitor antidepressants (Barsky and Ahern, 2004, Clark et al., 1998 and Greeven et al., 2007), a recent systematic review revealed that the recovery rate from hypochondriasis is only 30–50% (olde Hartman et al., 2009), and drop out rates from treatment are as high as 25% (Greeven et al., 2007). Thus, more treatment options are needed. The majority of CBT interventions for hypochondriasis are based on an empirically grounded cognitive-perceptual model of the disorder (e.g., Abramowitz et al., 2001 and Taylor and Asmundson, 2004). This model postulates that patients with significant health anxiety hold dysfunctional beliefs about health and misinterpret innocuous bodily sensations as dangerous. This leads to a cascade of anxiety and heightened physiological arousal which creates more symptoms and an intensification of pre-existing ones. Thus, prior CBT interventions have sought to decrease this arousal through relaxation training, and to change dysfunctional beliefs through cognitive restructuring. However, there is evidence that severe health anxiety is associated not only with abnormal beliefs, but also with dysfunctional cognitive processing, including a propensity for attentional biases (Rassin, Muris, Franken, & van Straten, 2008), and for rumination (Marcus, Hughes, & Arnau, 2008). Mindfulness-based cognitive therapy (MBCT) interventions have been gaining research and clinical attention for the treatment of mood (Segal et al., 2002 and Teasdale et al., 2000), and more recently, anxiety disorders (Evans et al., 2008). These interventions differ from traditional CBT in that they do not attempt to change dysfunctional beliefs, but rather to change the thought process. Studies have shown that mindfulness-based interventions are associated with decreased ruminative thoughts (Jain et al., 2007). Additionally, emerging evidence suggests that mindfulness meditation, the central technique in mindfulness-based interventions, is associated with adaptive changes in attention (Jha, Krompinger, & Baime, 2007), and in areas of the brain associated with interoception (Lazar et al., 2005). Thus, it was hypothesized that MBCT might be a beneficial intervention for patients with hypochondriasis, or severe health anxiety. Specifically, it was hypothesized that teaching MBCT in this population would result in decreased overall hypochondriacal symptoms, with specific reductions in the frequency and believability of health-related ruminations. It was also hypothesized that there would be improvements in quality of life after the intervention. Lastly, it was hypothesized that improvements in the primary outcome measure of health anxiety would be correlated with improvements in mindfulness.