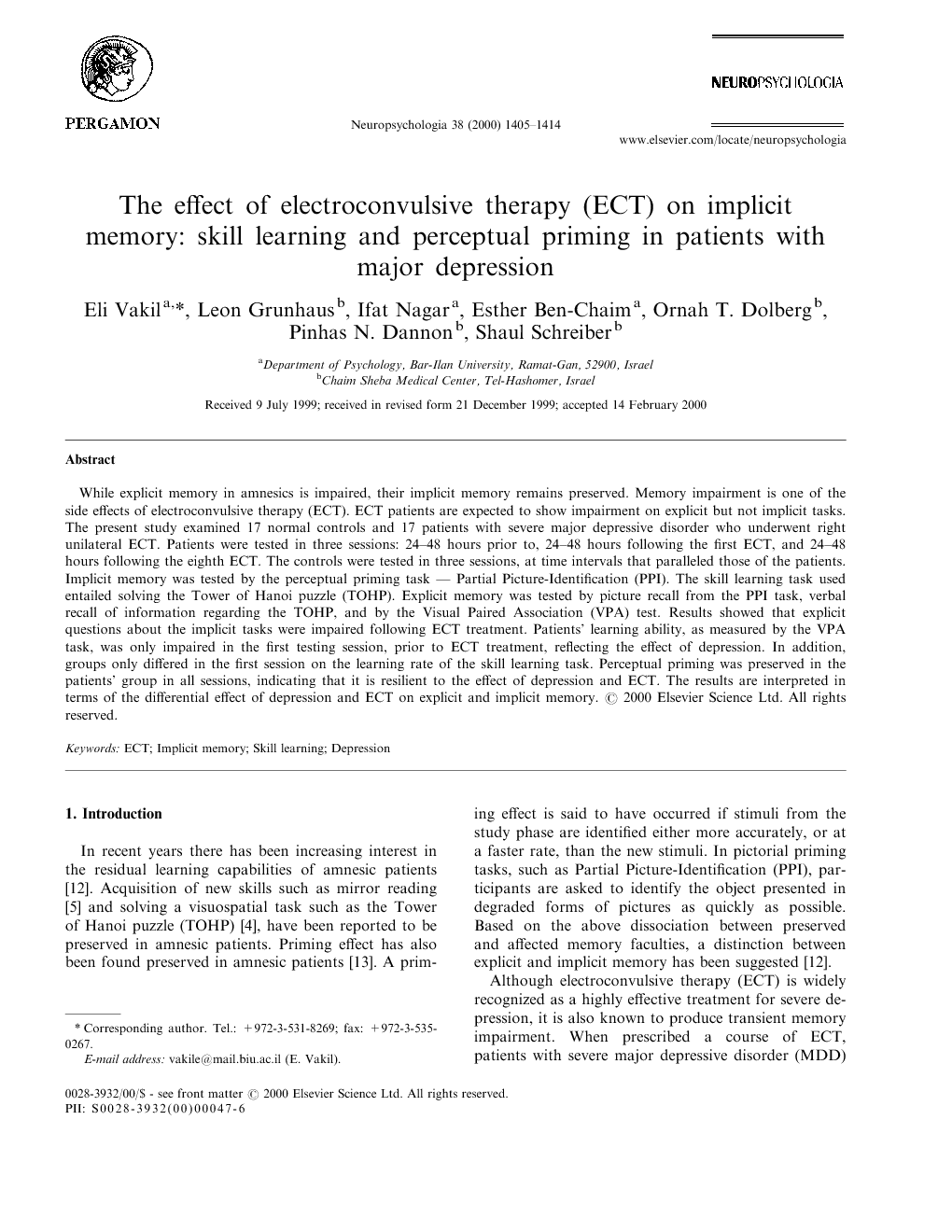 While explicit memory in amnesics is impaired, their implicit memory remains preserved. Memory impairment is one of the side effects of electroconvulsive therapy (ECT). ECT patients are expected to show impairment on explicit but not implicit tasks. The present study examined 17 normal controls and 17 patients with severe major depressive disorder who underwent right unilateral ECT. Patients were tested in three sessions: 24–48 hours prior to, 24–48 hours following the first ECT, and 24–48 hours following the eighth ECT. The controls were tested in three sessions, at time intervals that paralleled those of the patients. Implicit memory was tested by the perceptual priming task — Partial Picture-Identification (PPI). The skill learning task used entailed solving the Tower of Hanoi puzzle (TOHP). Explicit memory was tested by picture recall from the PPI task, verbal recall of information regarding the TOHP, and by the Visual Paired Association (VPA) test. Results showed that explicit questions about the implicit tasks were impaired following ECT treatment. Patients’ learning ability, as measured by the VPA task, was only impaired in the first testing session, prior to ECT treatment, reflecting the effect of depression. In addition, groups only differed in the first session on the learning rate of the skill learning task. Perceptual priming was preserved in the patients’ group in all sessions, indicating that it is resilient to the effect of depression and ECT. The results are interpreted in terms of the differential effect of depression and ECT on explicit and implicit memory.

In recent years there has been increasing interest in the residual learning capabilities of amnesic patients [12]. Acquisition of new skills such as mirror reading [5] and solving a visuospatial task such as the Tower of Hanoi puzzle (TOHP) [4], have been reported to be preserved in amnesic patients. Priming effect has also been found preserved in amnesic patients [13]. A priming effect is said to have occurred if stimuli from the study phase are identified either more accurately, or at a faster rate, than the new stimuli. In pictorial priming tasks, such as Partial Picture-Identification (PPI), participants are asked to identify the object presented in degraded forms of pictures as quickly as possible. Based on the above dissociation between preserved and affected memory faculties, a distinction between explicit and implicit memory has been suggested [12]. Although electroconvulsive therapy (ECT) is widely recognized as a highly effective treatment for severe depression, it is also known to produce transient memory impairment. When prescribed a course of ECT, patients with severe major depressive disorder (MDD) manifest anterograde as well as retrograde amnesia [15] and [20]. Several studies have demonstrated that left and right unilateral ECT causes selective impairment of verbal and nonverbal memory, respectively [1] and [18]. These findings are consistent with previous reports of patients suffering from lateralized hemispheric damage [11]. Most of the studies demonstrating intact skill learning and the priming effect of amnesia, tested patients who were already amnesic. Only a few studies have addressed the question of whether a skill or priming task, learned prior to the onset of amnesia, will also be preserved after ECT induced amnesia. Squire, Cohen and Zouzounis [16] have tested patients prescribed ECT, before and during the course of treatment, with a skill learning task (i.e., mirror reading). The results showed that in contrast to depressive patients not treated with ECT, the ECT patient group developed intact learning and retention of the skill over time. In other words, patients treated with ECT showed neither retrograde nor anterograde amnesia to skill learning, but did demonstrate impaired explicit memory. When tested during the course of treatment, intact priming effect and impaired explicit memory (i.e., lack of anterograde amnesia) [17], was found in patients prescribed ECT. Certain difficulties in these studies [16] and [17] prevent conclusive findings about the effect of ECT on implicit memory. In the study on skill learning [16], the control group only consisted of depressed patients. Since depressed patients might themselves be impaired as compared to normal controls, if a group of normal controls is not included in the study, it is difficult to reach conclusions concerning the effect of ECT on skill learning. An additional problem is that the second testing session was held on the day after the first treatment and the third testing session was conducted an average of 16 days after the last ECT treatment. Thus, the lack of effect of ECT on skill learning in the second testing session may possibly be due to the fact that a single ECT treatment is insufficient to cause the impairment. The lack of effect in the third testing session may possibly be due to the fact that the patients had sufficient time (i.e., 16 days) to recover from the ECT effect. Regarding the study on priming [17], since patients were not tested prior to the ECT treatment, the possibility that ECT could cause retrograde amnesia of priming was not investigated. In the present study a group of normal individuals, matched for age and sex with the patient group, served as the control group. It is important to note that in previous studies [16] and [17], patients were heterogeneous, with some receiving bilateral ECT and some receiving right unilateral ECT. Only patients receiving right unilateral ECT were included in the present study. The first testing session was given one day prior to the first ECT treatment. This enabled measurement of retrograde amnesia for all tests administered. In addition, a comparison of the control group to the patient group at this stage, prior to the administration of ECT, would reflect the pure effect of depression on the different memory tasks. The second session was given one day after the first ECT treatment, and the third session was given one day after the eighth session. This time schedule enabled us to test the effect of ECT at its initial and final phases. Another aspect unique to this study is that it tested the same patient group for the two types of implicit memory (i.e., skill learning and perceptual priming) along with explicit memory. Such a design enables a more reliable comparison of the differential effect of ECT on the different memory tasks within the same sample of patients. As mentioned above, all patients were prescribed a course of right unilateral ECT. Thus, in order to maximize the sensitivity of the tasks to memory impairment, visuospatial skill learning (i.e., TOHP) and perceptual priming (i.e., PPI) tasks were selected.