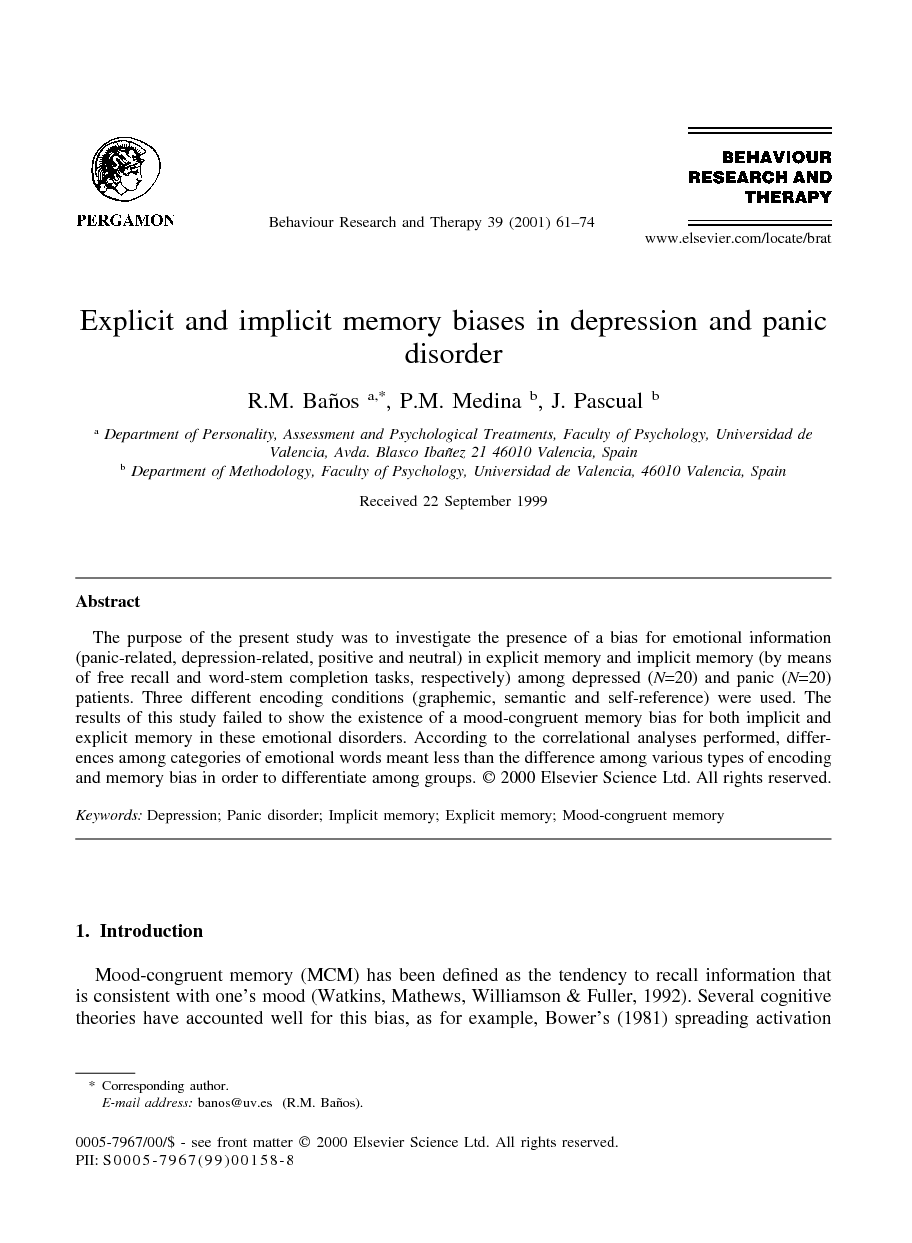 The purpose of the present study was to investigate the presence of a bias for emotional information (panic-related, depression-related, positive and neutral) in explicit memory and implicit memory (by means of free recall and word-stem completion tasks, respectively) among depressed (N=20) and panic (N=20) patients. Three different encoding conditions (graphemic, semantic and self-reference) were used. The results of this study failed to show the existence of a mood-congruent memory bias for both implicit and explicit memory in these emotional disorders. According to the correlational analyses performed, differences among categories of emotional words meant less than the difference among various types of encoding and memory bias in order to differentiate among groups.

Mood-congruent memory (MCM) has been defined as the tendency to recall information that is consistent with one's mood (Watkins, Mathews, Williamson & Fuller, 1992). Several cognitive theories have accounted well for this bias, as for example, Bower's (1981) spreading activation theory or Beck's (e.g. Kovacs & Beck, 1978) schema approach. However, there are some problems with these theories. Both approaches predict the presence of a MCM bias in all emotional disorders. This bias appears to be a robust finding in depression (for a review, see Blaney, 1986) but, in contrast, anxious patients do not seem to show facilitated recall or recognition memory for threat-related stimuli. Given these discrepancies, Williams, Watts, MacLeod and Mathews (1988) developed an alternative theory of emotional disorders. Following the approach of Mandler (1980), they proposed two stages in the cognitive processing: an automatic, preattentive stage (integration or activation) and a subsequent strategic, postattentive stage (elaboration). Integration or activation refers to the process that serves to strengthen the internal cohesiveness of a mental representation, whereas elaboration involves the formation and strengthening of associations between a mental representation and other existing representations in memory. Anxiety would be associated with the facilitated integrative processing of the threat-related information, but with no equivalent bias in the elaborative processing of such information. In contrast, depression would show the opposite pattern. Graf and Mandler (1984) discussed the potential relevance of the distinction between integration/activation and elaboration for explicit memory (EM) and implicit memory (IM). Most of investigators agree on the fact that EM performance depends more on the extent of elaboration whereas IM depends more on the extent of integration/activation (Graf & Mandler, 1984). Consequently, Williams et al.'s (1988) theory predicts that anxiety disorders would be characterised by implicit, but no explicit, MCM bias, whereas depressive disorders would be characterised by explicit, but no implicit, MCM bias. Regarding depression, although it is well established that this disorder is associated with facilitated EM for negative emotional stimuli (e.g. Derry and Kuiper, 1981, Dobson and Shaw, 1987 and Mathews and Bradley, 1983), there are controversial results about IM for emotional information. In some studies (Danion et al., 1995, Denny and Hunt, 1992, Hertel and Hardin, 1990 and Watkins et al., 1992), depressives showed facilitated EM, but no IM, for negative information. However, other studies (Bradley et al., 1996, Bradley et al., 1994, Bradley et al., 1995, Ruiz-Caballero, 1994, Ruiz-Caballero and González, 1997 and Watkins et al., 1996) found that depression was associated with MCM bias in automatic aspects of IM. Nevertheless, only two of the latter studies used clinical populations (Bradley et al., 1995 and Bradley et al., 1996). In contrast to depression, anxiety disorders are rarely associated with enhanced EM for threat-related information (with the exception of Panic Disorder), and research on MCM in anxiety has yielded equivocal results. On the one hand, several studies have found that GAD is characterised by implicit, but no explicit, MCM (e.g. MacLeod and McLaughlin, 1995 and Mathews et al., 1989), but others failed to replicate this finding (e.g. Mathews, 1994). Patients with PTSD also seem to exhibit IM bias for combat-related words (Amir, McNally & Wiegartz, 1996). However, social phobics do not seem to show either IM or EM bias (Lundh and Öst, 1997 and Rapee et al., 1994), except for the subgroup of nongeneralised social phobics, who did show an IM bias (Lundh & Öst, 1997). Regarding Panic Disorder (PD), several studies have shown that these patients are characterised by an enhanced conscious recall for threatening material. Furthermore, Becker et al., 1994, Cloitre and Liebowitz, 1991, Lundh et al., 1997 and McNally et al., 1989 reported a greater threat-bias in an EM task than in an IM task for PD patients. Cloitre et al., 1994 and Amir et al., 1996 reported, however, that PD patients were characterised by both EM and IM biases for threat, although these authors argued that the IM bias effect was not as robust as the EM bias. On the other hand, MacLeod and McLaughlin (1995) pointed out that the prediction that anxiety and depression will be associated with quite different patterns of IM and EM for emotional stimuli would be most directly addressed if the performance of depressed, anxious and control participants was contrasted within a single experimental study. One of our goals in the present study was to compare implicit and explicit MCM bias in depression and PD, and in doing so we would provide information regarding the contribution for priming and/or elaboration in MCM biases. We also investigated the content specificity hypothesis in MCM. Thus, four groups of stimuli were included: panic-related words, depression-related words, positive words, and neutral words. We attempted to provide information as to whether the MCM bias relates to the specific disorder relevant information, to all negative information, or to all emotional information. Furthermore, few studies have included the manipulation of encoding conditions. To our knowledge, only three published papers have investigated to which extent MCM biases depend on similarity of processing activities at encoding and at testing (Eysenck and Byrne, 1994, Richards and French, 1991 and Ruiz-Caballero and González, 1997). However, the results of these studies are somehow discrepant the present study we employed three encoding conditions designed to require either data-driven or conceptually-driven processing. The data-driven encoding condition was a ‘counting letters’ task. The conceptually-driven encoding conditions were: (a) a ‘generating’ task in which participants had to generate the appropriate words; and (b) a ‘self-reference’ task in which participants had to imagine a scene involving them and the word. Summing up, the aims of the present study were to: (a) investigate the contribution of priming and/or elaboration processes to MCM in two emotional disorders: depression and panic disorder; (b) evaluate the cognitive-content specificity assumption in MCM; and (c) investigate the extent to which MCM depends on matching processes at encoding and at testing.