عنوان انگلیسی
Dissociations between implicit and explicit memory in children: The role of strategic processing and the knowledge base
دانلود فوری مقاله + سفارش ترجمه 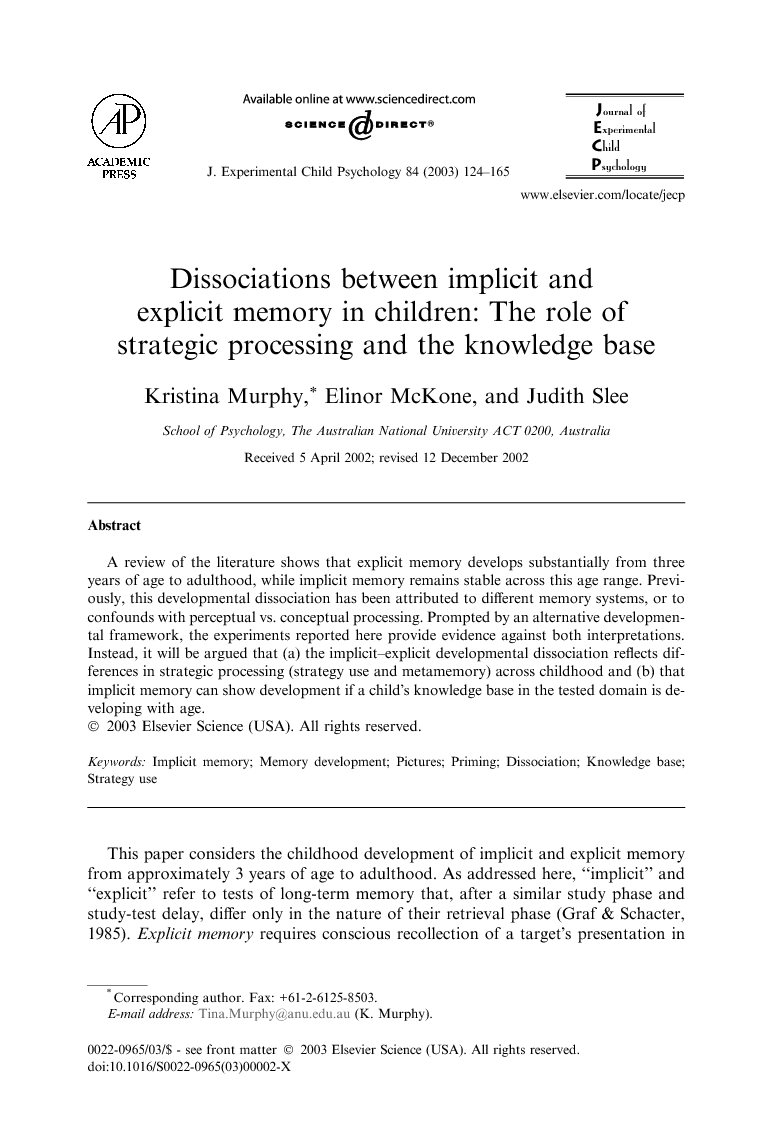 A review of the literature shows that explicit memory develops substantially from three years of age to adulthood, while implicit memory remains stable across this age range. Previously, this developmental dissociation has been attributed to different memory systems, or to confounds with perceptual vs. conceptual processing. Prompted by an alternative developmental framework, the experiments reported here provide evidence against both interpretations. Instead, it will be argued that (a) the implicit–explicit developmental dissociation reflects differences in strategic processing (strategy use and metamemory) across childhood and (b) that implicit memory can show development if a child’s knowledge base in the tested domain is developing with age.

This paper considers the childhood development of implicit and explicit memory from approximately 3 years of age to adulthood. As addressed here, “implicit” and “explicit” refer to tests of long-term memory that, after a similar study phase and study-test delay, differ only in the nature of their retrieval phase (Graf & Schacter, 1985). Explicit memory requires conscious recollection of a target’s presentation in the study phase, and is assessed via tasks such as free recall, cued recall, and old–new recognition. Implicit memory, in contrast, is independent of conscious recollection, and is instead assessed via the phenomenon of repetition priming in tasks such as naming degraded pictures, category exemplar generation, and word-stem-completion. In the latter task, for example, priming is revealed when the instruction to “Complete cha___ with the first word that comes to mind” produces the target completion chair more often when this item was present at study (primed condition) than when it was not (baseline condition). In adults, implicit and explicit memory are dissociated under many circumstances (for review, see Roediger & McDermott, 1993). For example, amnesic patients perform very poorly on explicit tests of memory, but perform normally or near-normally on a range of implicit memory tests (e.g., Jacoby & Witherspoon, 1982; Warrington & Weiskrantz, 1968). In normal adults, explicit memory is much more severely affected than implicit memory by levels-of-processing manipulations (e.g., Craik & Tulving, 1975; Jacoby & Dallas, 1981) and by divided attention (Parkin, Reid, & Russo, 1990; Parkin & Russo, 1990) while, at the same time, implicit memory is much more severely affected than explicit memory by study-test mismatches in perceptual form (e.g., auditory study phase–visual test phase; Rajaram & Roediger, 1993). In adults, there has been much theoretical debate about the origins of implicit–explicit dissociations. Two theories have received particular attention. According to the memory systems account (e.g., Moscovitch, 1994; Schacter & Tulving, 1994; Zola-Morgan & Squire, 1993), different brain systems support explicit and implicit memory, perhaps by providing two distinct storage locations or two distinct retrieval routes to a common storage location. According to the alternative perceptual vs. conceptual processing account ( Blaxton, 1989), apparent dissociations between implicit and explicit memory reflect confounds with the perceptual (appearance- or form-based) vs. conceptual (semantic or meaning-based) nature of the information required by the task. For example, in early studies of implicit–explicit memory differences, it was common to use word-stem-completion (a perceptual task) as the implicit test, and free recall (a primarily conceptual task) as the explicit test. We note, however, that many studies in the adult literature have now carefully equated the nature of processing across their implicit and explicit tasks (e.g., for perceptual processing, stem-completion has been contrasted with stem-cued recall), yet have still reported clear implicit–explicit dissociations (e.g., Challis, Velichovsky, & Craik, 1996; Schwartz, Rosse, & Deutsch, 1993). An implicit–explicit dissociation in childhood development In the childhood literature, a striking developmental dissociation between implicit and explicit memory has been reported. Specifically, while explicit memory is well known to improve even into adolescence (Kail, 1990), the usual finding of implicit memory studies to date is of no age-related increase in priming. Of 18 published studies, 15 have concluded that implicit memory is stable across a wide age range (3 years to adulthood). To date, only two possible explanations of this developmental dissociation have been considered, both of which have been appropriated from the adult literature discussed above. Early developmental articles (pre-1995) tended to favour a memory systems account (e.g., Naito, 1990; Schacter & Moscovitch, 1984). Here, it was argued that implicit and explicit systems reach physiological maturity at different ages, with implicit memory reflecting an “early-developing” system, and explicit memory a “late-developing” system. We note that, on the basis of current evidence at least, the memory systems account remains a viable possibility. Alternatively, several authors (e.g., Komatsu, Naito, & Fuke, 1996; Perruchet, Frazier, & Lautrey, 1995; Perez, Peynircioglu, & Blaxton, 1998) observed that early developmental studies confounded implicit vs. explicit retrieval with perceptual vs. conceptual processing, and thus considered a processing account. Given that most studies had examined implicit memory for perceptual information (the standard test in children being the picture-fragment identification task), it was suggested that age-related development of implicit memory might be manifested if conceptual processing was required. Experimental support for this hypothesis, however, has been unconvincing. Several studies have used an explicit comparison task that is well matched for type of processing to the implicit test. For conceptual processing, the implicit category exemplar generation task (“What is the first animal that comes to mind?”) has been contrasted with an explicit category-cued recall task (“What was the animal that was on the study list?”; Perez et al., 1998; Perruchet et al., 1995). Similarly, for perceptual processing, implicit object identification tasks have been contrasted with explicit old–new recognition for the same pictures ( Carroll, Byrne, & Kirsner, 1985; Drummey & Newcombe, 1995; Hayes & Hennessy, 1996; Parkin & Streete, 1988). Despite this close matching, however, the standard implicit–explicit dissociation has been obtained in all cases.