عنوان انگلیسی
Getting explicit memory off the ground: Steps toward construction of a neuro-developmental account of changes in the first two years of life
دانلود فوری مقاله + سفارش ترجمه 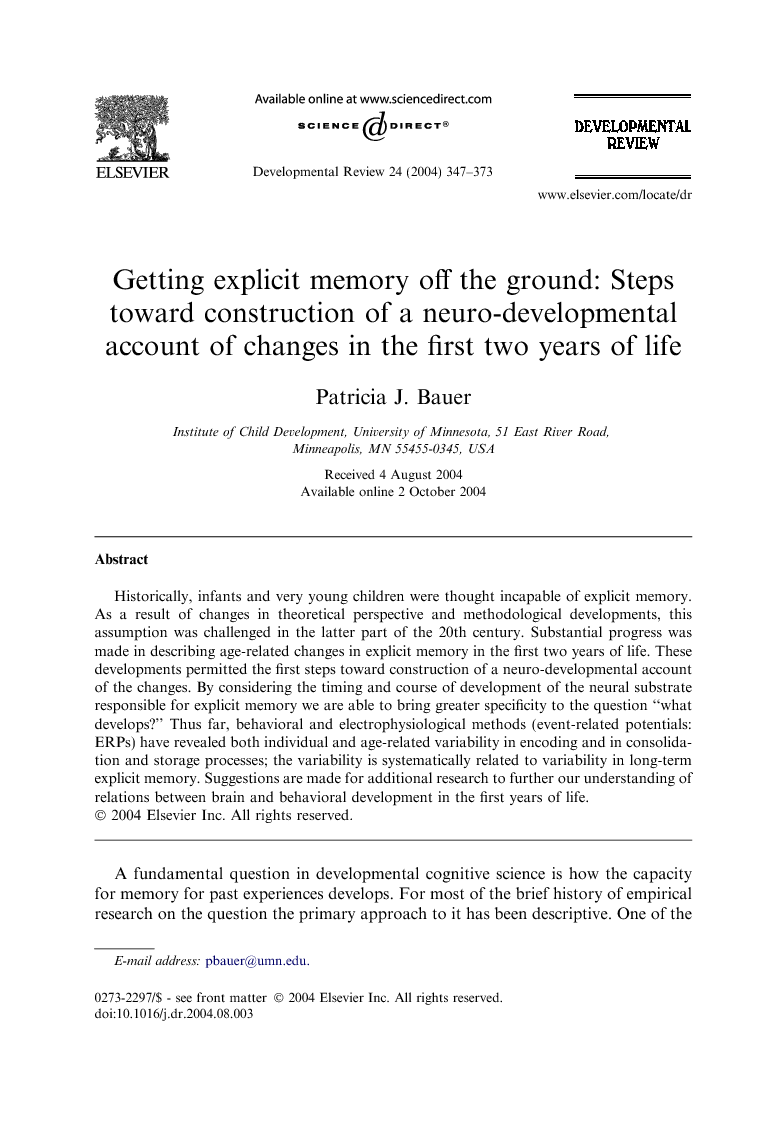 Historically, infants and very young children were thought incapable of explicit memory. As a result of changes in theoretical perspective and methodological developments, this assumption was challenged in the latter part of the 20th century. Substantial progress was made in describing age-related changes in explicit memory in the first two years of life. These developments permitted the first steps toward construction of a neuro-developmental account of the changes. By considering the timing and course of development of the neural substrate responsible for explicit memory we are able to bring greater specificity to the question “what develops?” Thus far, behavioral and electrophysiological methods (event-related potentials: ERPs) have revealed both individual and age-related variability in encoding and in consolidation and storage processes; the variability is systematically related to variability in long-term explicit memory. Suggestions are made for additional research to further our understanding of relations between brain and behavioral development in the first years of life.

A fundamental question in developmental cognitive science is how the capacity for memory for past experiences develops. For most of the brief history of empirical research on the question the primary approach to it has been descriptive. One of the goals for the new millennium is to enrich the descriptive database. Another goal is to progress toward explanation of age-related change. This review is oriented primarily toward the latter goal. Ultimately, a full explanation of how the capacity for remembering past events develops will entail multiple levels of analysis. We will need to understand the “ground level” contributions made by age-related changes in the neural systems and basic mnemonic processes that permit memory representations to be formed. We also will need to understand the “upper level” contributions of socialization processes, for example (see Ornstein & Haden, this issue). In this review, I approach the topic of memory development from the “ground up.” I focus on advances in our understanding of age-related changes in memory behavior and how they relate to developmental changes in neural systems and basic mnemonic processes. The review is from the “ground up” in another sense as well: it is concentrated on the period of time during which the capacity to remember the past is first emerging, namely, the first years of life. As implied by the title, the review is focused in yet another way: concern is with early developments in the particular type of memory termed explicit (or declarative). Explicit memory permits recall and recognition of names, dates, places, and events. It is specialized for rapid, even 1-trial learning and its operation is conscious: individuals are aware that the memory representation is based on a past experience. Explicit memory is what supports learning of a list of words in a laboratory setting and then later recalling them (“What words were on the list?”) or consciously recognizing them (“Was the word elephant on the list?”). Explicit memory contrasts with implicit (or non-declarative) forms of memory, the contents of which often are procedures or skills (frequently motor-based). Implicit memory typically is evidenced not by a description of a past event or experience but by more skilled or precise behavior as a result of experience. With some exceptions (e.g., priming), learning occurs gradually, over a number of trials. Unlike explicit memories of which the individual is consciously aware, implicit memory operates outside of consciousness: individuals need not appreciate that their current behavior is enhanced or changed as a result of a previous experience. The distinction between explicit and implicit forms of memory is common in the adult cognitive and neuroscience literatures. It is supported by patterns of dissociation in memory behavior in intact adults, in adults with lesions and disease, and in animal models; as well as results from neuroimaging studies (see Schacter, Wagner, & Buckner, 2000; for a review). Among developmental scientists, however, the distinction is not universally recognized. A major reason is that is it not clear how to assess “conscious access” in an organism that is not able to talk (e.g., Rovee-Collier, 1997). In spite of this concern, a central premise of this review is that the distinction between explicit and implicit memory is critical for accurate description of the timing and course of memory development. It also is necessary for the construction of neuro-developmental models of age-related changes in memory. This is because in addition to differing in their contents, functions, and rules of operation, the different forms of memory are supported by different neural substrates. If we are to make progress toward understanding how mnemonic behavior is instantiated at the neural level, then we must be clear about the behavior we are examining. For this reason, in this review, the distinction between explicit and implicit memory is recognized and the focus is the former. I briefly summarize the history of research on early memory development and the forces that contributed to advances in the area in the closing decades of the 20th century. I then summarize what is known about early developments in explicit memory. I use the bulk of the review to outline efforts to understand age-related changes in behavior in terms of developmental changes in the neural systems and basic processes that support explicit memory.