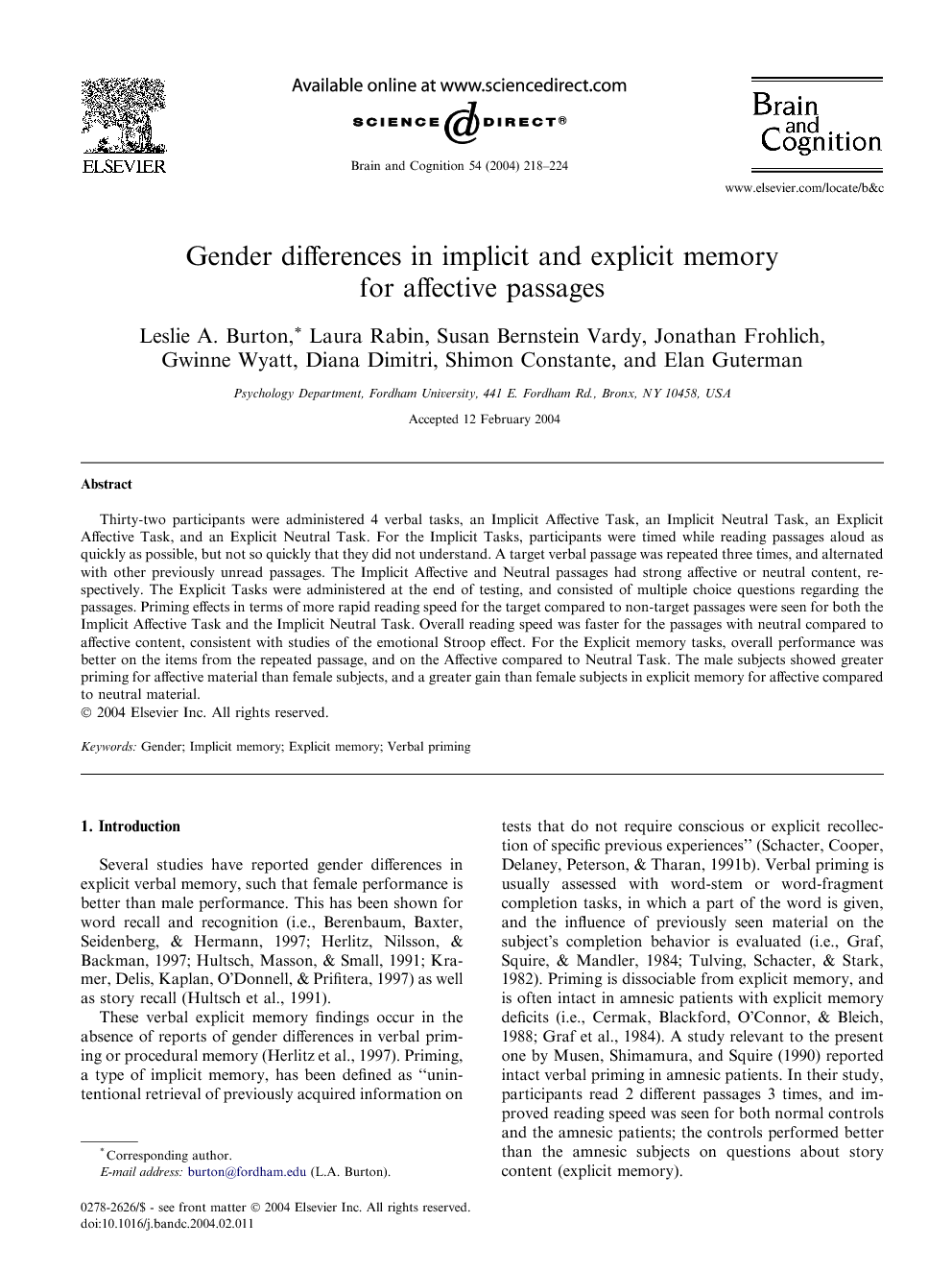 Thirty-two participants were administered 4 verbal tasks, an Implicit Affective Task, an Implicit Neutral Task, an Explicit Affective Task, and an Explicit Neutral Task. For the Implicit Tasks, participants were timed while reading passages aloud as quickly as possible, but not so quickly that they did not understand. A target verbal passage was repeated three times, and alternated with other previously unread passages. The Implicit Affective and Neutral passages had strong affective or neutral content, respectively. The Explicit Tasks were administered at the end of testing, and consisted of multiple choice questions regarding the passages. Priming effects in terms of more rapid reading speed for the target compared to non-target passages were seen for both the Implicit Affective Task and the Implicit Neutral Task. Overall reading speed was faster for the passages with neutral compared to affective content, consistent with studies of the emotional Stroop effect. For the Explicit memory tasks, overall performance was better on the items from the repeated passage, and on the Affective compared to Neutral Task. The male subjects showed greater priming for affective material than female subjects, and a greater gain than female subjects in explicit memory for affective compared to neutral material.

Several studies have reported gender differences in explicit verbal memory, such that female performance is better than male performance. This has been shown for word recall and recognition (i.e., Berenbaum, Baxter, Seidenberg, & Hermann, 1997; Herlitz, Nilsson, & Backman, 1997; Hultsch, Masson, & Small, 1991; Kramer, Delis, Kaplan, O’Donnell, & Prifitera, 1997) as well as story recall (Hultsch et al., 1991). These verbal explicit memory findings occur in the absence of reports of gender differences in verbal priming or procedural memory (Herlitz et al., 1997). Priming, a type of implicit memory, has been defined as “unintentional retrieval of previously acquired information on tests that do not require conscious or explicit recollection of specific previous experiences” (Schacter, Cooper, Delaney, Peterson, & Tharan, 1991b). Verbal priming is usually assessed with word-stem or word-fragment completion tasks, in which a part of the word is given, and the influence of previously seen material on the subject’s completion behavior is evaluated (i.e., Graf, Squire, & Mandler, 1984; Tulving, Schacter, & Stark, 1982). Priming is dissociable from explicit memory, and is often intact in amnesic patients with explicit memory deficits (i.e., Cermak, Blackford, O’Connor, & Bleich, 1988; Graf et al., 1984). A study relevant to the present one by Musen, Shimamura, and Squire (1990) reported intact verbal priming in amnesic patients. In their study, participants read 2 different passages 3 times, and improved reading speed was seen for both normal controls and the amnesic patients; the controls performed better than the amnesic subjects on questions about story content (explicit memory). Emotional arousal has been shown to lead to enhancement of explicit memory in a variety of studies (i.e., Ceitlin, Dos Santos, Parisotto, Zannata, & Chaves, 1995; Granholm, Wolfe, & Butters, 1985; Oscar-Berman, Hancock, Mildworf, Hutner, & Weber, 1990; Whissell, Povey, & Dewson, 1987). For example, Ceitlin et al. report that negative words are recalled better than positive words, which are recalled better than neutral words, in normal subjects. Doerksen and Shimamura (2001) reported that emotionally valenced words were remembered better than neutral words on a free recall test. Affective verbal memory has also been evaluated in neurological populations, and normative performance is often included for comparison. Phelps, Spencer, and LaBar (1997) used two verbal affective memory tasks in temporal lobectomy patients and a control group. They found that the left and right temporal lobectomy patients showed the control pattern of better recall of emotional vs. neutral words, and better recall of neutral words in emotional sentences vs. neutral sentences, with the left temporal lobectomy group performing most poorly. Cahill, Babinsky, Markowitsch, and McGaugh (1995) report a patient with bilateral amygdala damage who did not show the pattern of better memory for an emotional story than a neutral story that control subjects showed. Only a very few studies have evaluated affective verbal implicit memory. Babinsky et al. (1993) report a patient with bilateral amygdala damage due to Urbach–Wiethe disease who showed less priming for affective than neutral words on a word-stem completion task; no control data were reported. Some researchers have evaluated affective implicit memory using combinations of verbal and nonverbal stimuli. Greve, Bauer, and Bowers (1991) investigated whether right hemisphere disease patients, who were impaired on explicit tests of facial affect recognition, showed implicit knowledge of affective facial expressions. Participants were shown affective faces (500 ms) that were immediately followed by a single emotion word (happy, sad, angry, or frightened). Participants were asked to read the word as quickly as possible while ignoring the face. Patients with right hemisphere disease failed to show normal patterns of reaction time facilitation on this measure of affective priming. In an implicit test using novel faces, Johnson, Kim, and Risse (1985) evaluated Korsakoff’s patients and found that preference ratings for faces varied according to whether the story presented with each face was positive or negative, even though their explicit memory for the stories and the faces was severely impaired. Other studies have evaluated affective nonverbal implicit memory. In a normative sample, Burton et al. (2004) used a reaction time paradigm for poser identity evaluations in a task using affective faces and a task using neutral faces. Overall speed and accuracy were better for the Affective Task than the Neutral Task, consistent with the literature suggesting a facilitation of performance by affective content. Further, priming effects were significant for the Affective but not the Neutral Task. The Explicit Post-Test indicated no conscious knowledge of the stimulus frequency that was associated with performance facilitation. Other findings of interest included the generally faster performance of the female vs. male subjects, and the differential speeds and susceptibility to priming of different emotions. Anger and shock were responded to most rapidly and accurately in several of the conditions, showed no gender differences, and showed significant priming for both RT and accuracy. Fear and pain were responded to least accurately, were associated with faster female than male reaction time, and the accuracy data showed a kind of reverse priming; this was interpreted in terms of a response inhibition. The present study sought to investigate implicit and explicit memory for stories with affective and neutral content. Participants were timed while reading repeated or unrepeated stories with affective and neutral content, and were subsequently questioned about story content. As in the Musen et al. (1990) study, it was expected that reading speed would improve with repetition. It was not clear what the effect of affective content on verbal priming would be, given the lack of literature in this area.