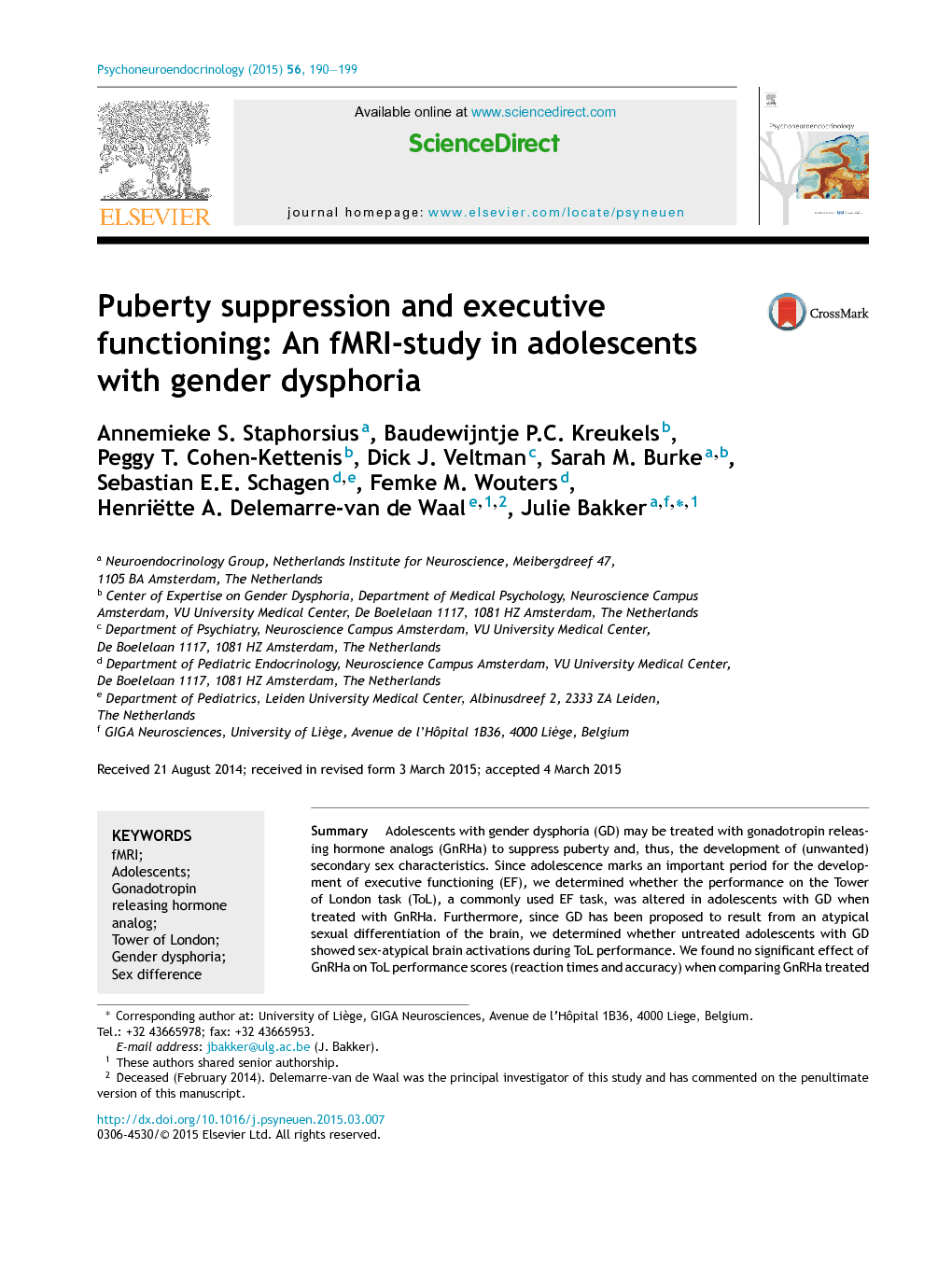 Gender dysphoria (GD) is a condition in which people suffer from an incongruence between their natal sex and their gender identity, i.e. their experienced gender ( American Psychiatric Association, 2013). For young individuals with GD, puberty is a period that causes great distress because it is characterized by unwanted physical changes, the development of the secondary sex characteristics. Therefore puberty inhibiting hormones may be prescribed such as the gonadotropin releasing hormone analogs (GnRHa) leuprolide or triptorelin ( Gooren and Delemarre-van de Waal, 1996). Some researchers expressed concerns about the possible disadvantages of GnRHa administration during adolescence (Spriggs, 2004, Viner, 2005, Houk and Lee, 2006 and Korte et al., 2008). They fear that it may lead to misdiagnosis or that adolescents cannot make complex life decisions. Moreover, some have questioned whether hormonal suppression affects psychological functioning and if it may entail medical risks. Indeed, during adolescence the brain is still developing. Furthermore, puberty has been suggested to represent a second organizational period during brain development in rodents (Juraska et al., 2013) and in humans (Romeo, 2003 and Sisk and Zehr, 2005). The prefrontal cortex (PFC) in particular appears to develop much later than other brain areas (Huttenlocher, 1979). Histological studies suggest that there is a second wave of synaptic proliferation in the PFC at the onset of puberty (Huttenlocher, 1979, Bourgeois et al., 1994 and Woo et al., 1997), followed by a plateau phase and synaptic pruning. Executive functioning (EF), which is believed to depend heavily on prefrontal activation, also develops relatively slowly. For instance, performance on the Tower of London task (ToL), a frequently used EF task, improves with age until early adulthood (De Luca et al., 2003, Huizinga et al., 2006, Asato et al., 2006 and Albert and Steinberg, 2011). Since puberty marks an important period in the development of EF, the question arises if pubertal suppression affects this development. Therefore, in the present study, adolescents with GD who received GnRHa to suppress their puberty were compared with a group of control adolescents regarding ToL performance and brain activation patterns (using functional magnetic resonance imaging, fMRI). To check whether potential differences between the groups were due to the suppression (and not due to GD), we also compared them with a group of age matched adolescents with GD who were not – yet – using GnRHa but were already in puberty. Most of the previous ToL neuroimaging studies did not report – or perhaps did not look for – any sex effects (Owen et al., 1996, Baker et al., 1996, Dagher et al., 1999, Lazeron et al., 2000, Rowe et al., 2001, Van den Heuvel et al., 2003, Newman et al., 2003, Schall et al., 2003, Wagner et al., 2006 and Boghi et al., 2006). However, one study reported sex differences in precuneus and dorsolateral prefrontal cortex (DLPFC) activation (Boghi et al., 2006). Therefore we examined sex differences as well. Furthermore, it has been hypothesized that sexual differentiation of the brain might be different in individuals with GD (Cohen-Kettenis and Gooren, 1999, Van Goozen et al., 2002 and Swaab, 2004). Functional neuroimaging studies comparing adults with GD (before the start of treatment) to controls demonstrated that MFs differed from their natal sex in parietal activation during a mental rotation task (Schöning et al., 2010) and showed female-like activity during processing of erotic stimuli (Gizewski et al., 2009) and after exposure to androstadienone, an odorous steroid compound (Berglund et al., 2008). In a verbal fluency study with adolescents performed by our group (Soleman et al., 2013), activation levels of untreated FMs and MFs fell in between those of the control groups. Structural neuroimaging studies have also shown intermediate values in adult FMs and MFs compared to control groups (Rametti et al., 2011a, Rametti et al., 2011b and Kranz et al., 2014) and several structural studies have shown differences between adults with GD and controls sharing their natal sex (Luders et al., 2009, Luders et al., 2012, Simon et al., 2013, Zubiaurre-Elorza et al., 2013 and Hoekzema et al., 2015) although another study reported brain volumes largely in line with their natal sex (Savic and Arver, 2011). As mentioned above, our group has examined the effect of GD on VF performance and brain activation in untreated adolescents (Soleman et al., 2013). Although the VF task may be considered an executive functioning task, the effect of GnRHa treatment on VF performance and brain activation was not investigated. In this study we examined if ToL-related brain activation of adolescents with GD, before start of GnRHa and while on GnRHa, was more in line with that of individuals of their experienced gender or of their natal sex. We believe that the present study is the first to examine the effects of puberty suppression on executive functioning.