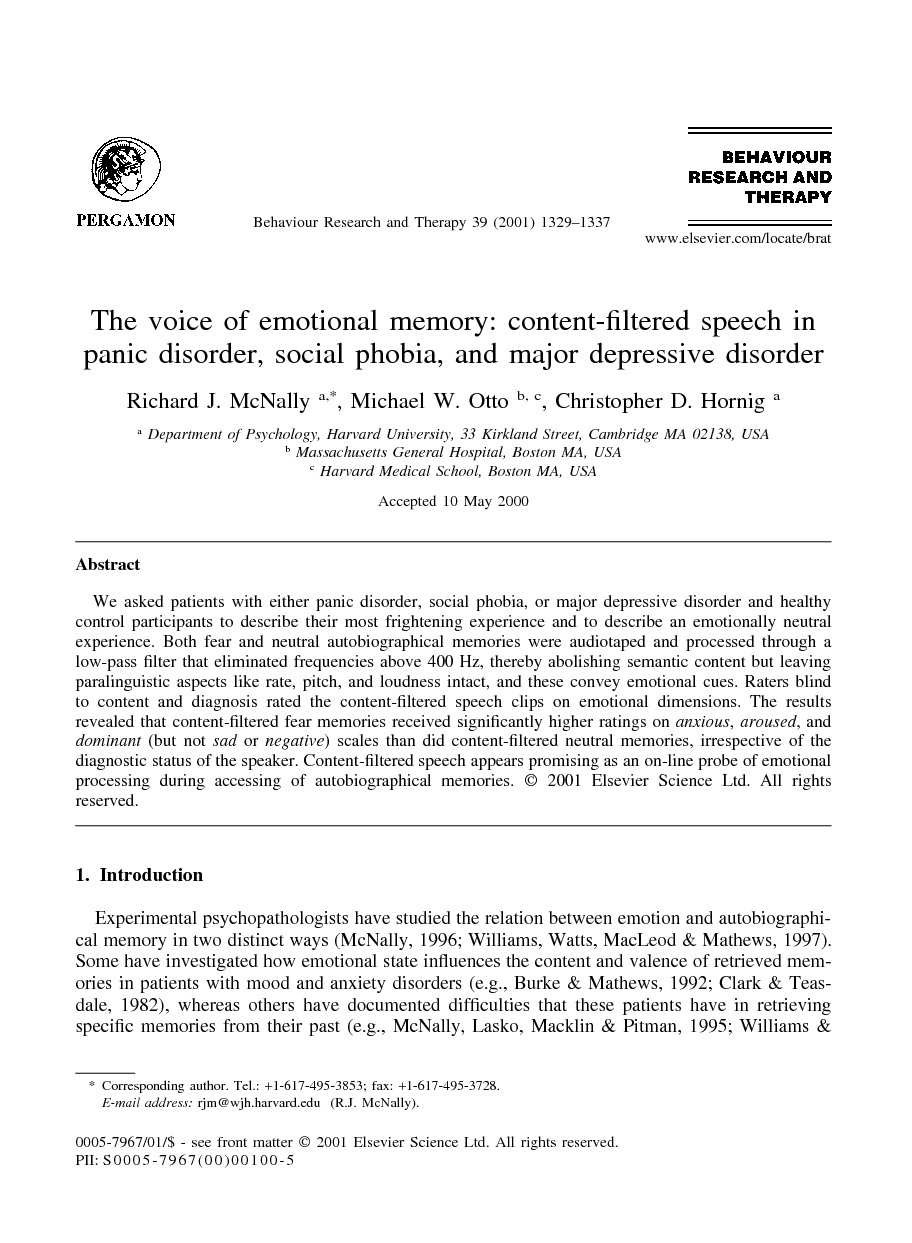 We asked patients with either panic disorder, social phobia, or major depressive disorder and healthy control participants to describe their most frightening experience and to describe an emotionally neutral experience. Both fear and neutral autobiographical memories were audiotaped and processed through a low-pass filter that eliminated frequencies above 400 Hz, thereby abolishing semantic content but leaving paralinguistic aspects like rate, pitch, and loudness intact, and these convey emotional cues. Raters blind to content and diagnosis rated the content-filtered speech clips on emotional dimensions. The results revealed that content-filtered fear memories received significantly higher ratings on anxious, aroused, and dominant (but not sad or negative) scales than did content-filtered neutral memories, irrespective of the diagnostic status of the speaker. Content-filtered speech appears promising as an on-line probe of emotional processing during accessing of autobiographical memories.

Experimental psychopathologists have studied the relation between emotion and autobiographical memory in two distinct ways (McNally, 1996 and Williams, Watts, MacLeod & Mathews, 1997). Some have investigated how emotional state influences the content and valence of retrieved memories in patients with mood and anxiety disorders (e.g., Burke & Mathews, 1992 and Clark & Teasdale, 1982), whereas others have documented difficulties that these patients have in retrieving specific memories from their past (e.g., McNally, Lasko, Macklin & Pitman, 1995 and Williams & Dritschel, 1988). Nearly all research on autobiographical memory in people with emotional disorders concerns either the valence of the memories or their degree of specificity. Yet the affective significance of autobiographical memories may also be revealed by paralinguistic dimensions of speech exhibited by people recounting emotional episodes. For example, the emotional experience of describing one's most terrifying panic attack may be signalled as much as by how one describes it as much as by what one says. Content-filtered speech methods devised by social psychologists specializing in nonverbal communication may prove useful in the study of emotional memories in people with anxiety and mood disorders (Ambady & Rosenthal, 1992). Pioneered by Starkweather, 1956a and Starkweather, 1956b, it involves passing audiotaped speech samples through a filter that eliminates all high frequencies, thereby abolishing semantic content, but leaving paralinguistic features (e.g., pitch, rate, loudness) intact. Importantly, raters blind to the content of the original audiotapes can readily evaluate content-filtered speech samples on various emotional dimensions, and these ratings predict behavior in a variety of interpersonal contexts (Ambady, Bernieri & Richeson, 2000, Ambady & Rosenthal, 1992 and Milmoe, Rosenthal, Blane, Chafetz & Wolf, 1967). For example, ratings of affect conveyed in 10-s, content-filtered clips extracted from the speech of physicians during their interactions with patients identifies those physicians who get sued by their patients (Ambady et al., 1999). The purpose of our pilot investigation was to test the feasibility of content-filtered speech as an emotion probe in patients with panic disorder, major depressive disorder, social phobia, and in healthy control participants. We asked participants to describe their most frightening experience (fear memory) and also to describe what they had for breakfast that morning (neutral memory). After content-filtering audiotapes of both memories, we had raters evaluate them on emotional dimensions. We addressed three primary questions. First, are content-filtered autobiographical fear memories emotionally distinguishable from content-filtered neutral memories? Second, is the content-filtered speech of patients with emotional disorders emotionally distinguishable from that of healthy control participants, irrespective of the type of memory being recalled? Third, is the content-filtered speech of patients with emotional disorders especially distinguished from that of healthy control participants when both groups are recounting fear memories relative to neutral memories?