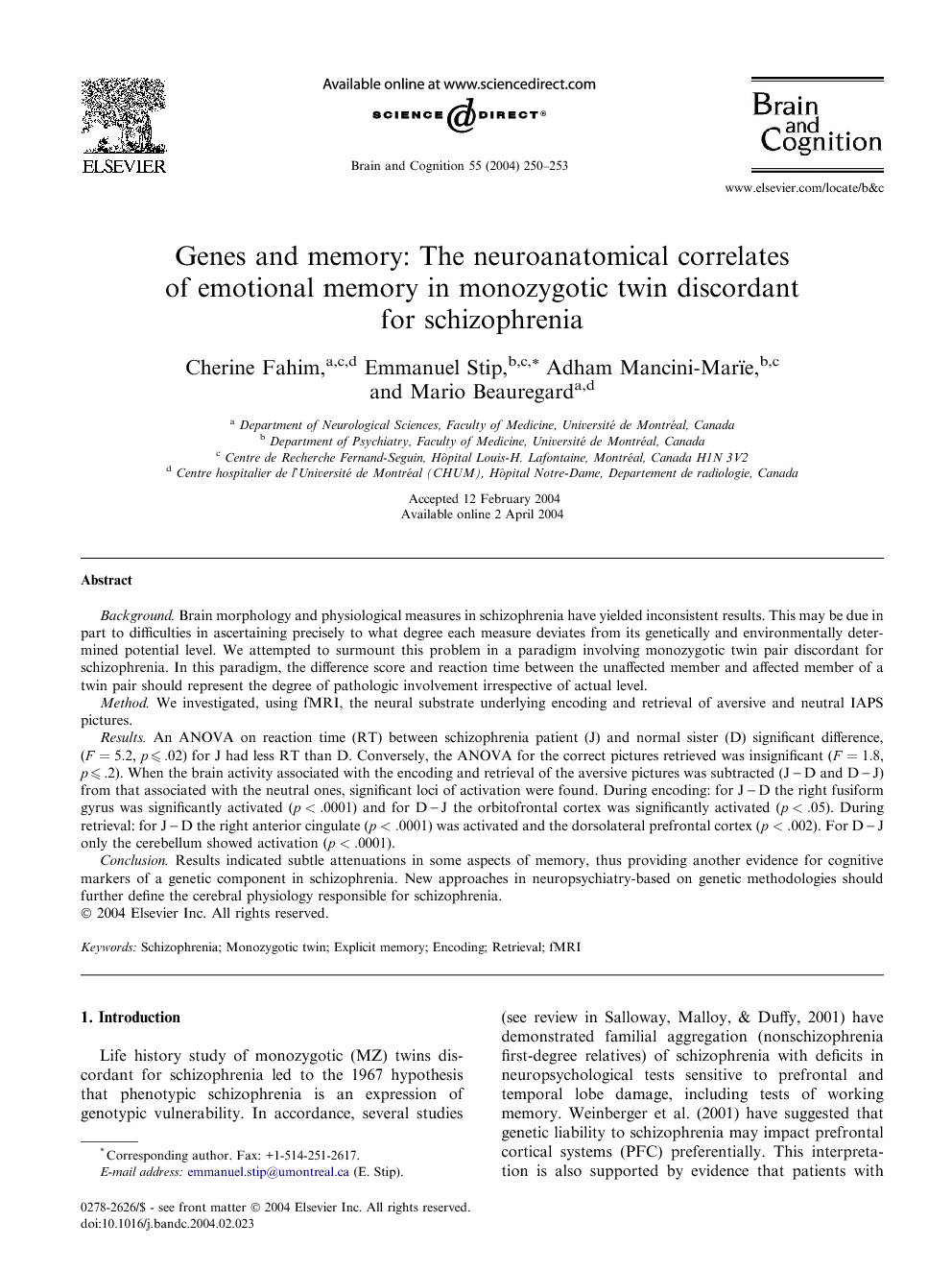 Background. Brain morphology and physiological measures in schizophrenia have yielded inconsistent results. This may be due in part to difficulties in ascertaining precisely to what degree each measure deviates from its genetically and environmentally determined potential level. We attempted to surmount this problem in a paradigm involving monozygotic twin pair discordant for schizophrenia. In this paradigm, the difference score and reaction time between the unaffected member and affected member of a twin pair should represent the degree of pathologic involvement irrespective of actual level. Method. We investigated, using fMRI, the neural substrate underlying encoding and retrieval of aversive and neutral IAPS pictures. Results. An ANOVA on reaction time (RT) between schizophrenia patient (J) and normal sister (D) significant difference, (F=5.2, p⩽.02) for J had less RT than D. Conversely, the ANOVA for the correct pictures retrieved was insignificant (F=1.8, p⩽.2). When the brain activity associated with the encoding and retrieval of the aversive pictures was subtracted (J − D and D − J) from that associated with the neutral ones, significant loci of activation were found. During encoding: for J − D the right fusiform gyrus was significantly activated (p<.0001) and for D − J the orbitofrontal cortex was significantly activated (p<.05). During retrieval: for J − D the right anterior cingulate (p<.0001) was activated and the dorsolateral prefrontal cortex (p<.002). For D − J only the cerebellum showed activation (p<.0001). Conclusion. Results indicated subtle attenuations in some aspects of memory, thus providing another evidence for cognitive markers of a genetic component in schizophrenia. New approaches in neuropsychiatry-based on genetic methodologies should further define the cerebral physiology responsible for schizophrenia.

Life history study of monozygotic (MZ) twins discordant for schizophrenia led to the 1967 hypothesis that phenotypic schizophrenia is an expression of genotypic vulnerability. In accordance, several studies (see review in Salloway, Malloy, & Duffy, 2001) have demonstrated familial aggregation (nonschizophrenia first-degree relatives) of schizophrenia with deficits in neuropsychological tests sensitive to prefrontal and temporal lobe damage, including tests of working memory. Weinberger et al. (2001) have suggested that genetic liability to schizophrenia may impact prefrontal cortical systems (PFC) preferentially. This interpretation is also supported by evidence that patients with schizophrenia, as well as their siblings, show reduced gray matter in the frontal lobes, but not in posterior cortical regions, compared to controls. Specifically, a study by Goldberg et al. (1995) concluded that a comparison between the unaffected twins from the discordant sample and the normal twins indicated subtle attenuation in some aspects of memory in the unaffected group and thus provided evidence for cognitive markers of a genetic component in schizophrenia. A well established distinction within the domain of memory is that between short-term, or “working” memory, and long-term, or episodic memory, the former depending critically on prefrontal cortical regions and the latter depending on medial temporal lobe (Salloway et al., 2001). Hence, in this report we aimed to investigate prefrontal regions (orbitofrontal OFC, anterior cingulate AC, and dorsolateral prefrontal cortex DLPC) in a MZ twin discordant for schizophrenia using a functional magnetic resonance imaging (fMRI) working memory paradigm (encoding and retrieval). We predicted a priori that memory deficits will be observed in the twin sisters. Case history. Ms. J and Ms. D are French-Canadian 24-year-old MZ twins who are right-handed and discordant for schizophrenia. Ms. J was admitted to a psychiatric hospital for the first time at the age of 22, when she tried to commit suicide, a few months after giving birth to her first baby boy from an unknown father. During her stay, Ms. J was socially disinhibited, abused drugs, escaped from hospitals several times and was involved in prostitution. With respect to her MZ twin, Ms. D lives a normal life. Interestingly, their maternal grand-mother suffered from a psychiatric illness, the nature of which is not clear, and their paternal grand-mother committed suicide in her sixties. In addition, the twins’ father physically abused his children.