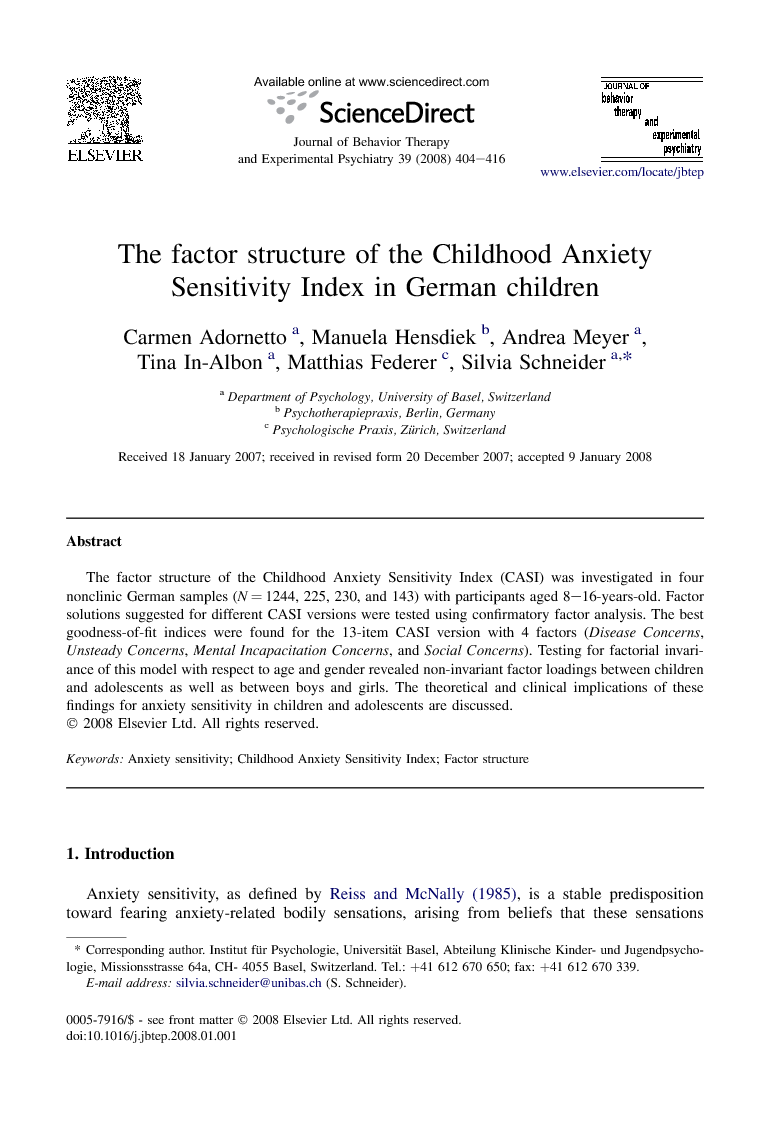 The factor structure of the Childhood Anxiety Sensitivity Index (CASI) was investigated in four nonclinic German samples (N = 1244, 225, 230, and 143) with participants aged 8–16-years-old. Factor solutions suggested for different CASI versions were tested using confirmatory factor analysis. The best goodness-of-fit indices were found for the 13-item CASI version with 4 factors (Disease Concerns, Unsteady Concerns, Mental Incapacitation Concerns, and Social Concerns). Testing for factorial invariance of this model with respect to age and gender revealed non-invariant factor loadings between children and adolescents as well as between boys and girls. The theoretical and clinical implications of these findings for anxiety sensitivity in children and adolescents are discussed.

Anxiety sensitivity, as defined by Reiss and McNally (1985), is a stable predisposition toward fearing anxiety-related bodily sensations, arising from beliefs that these sensations have harmful somatic, psychological or social consequences. According to Reiss and McNally (1985), anxiety sensitivity includes different kinds of anxiety symptoms, not only physical symptoms (e.g., rapid heart beat) but also mental symptoms (e.g., racing thoughts) and publicly observable physical symptoms (e.g., stomach growling). Expectancy theory (Reiss, 1991 and Reiss and McNally, 1985) conceives anxiety sensitivity as a personality trait increasing a person's vulnerability to fear conditioning. Designed in accordance with expectancy theory, the Anxiety Sensitivity Index (ASI; Reiss, Peterson, Gursky, & McNally, 1986) is a self-report questionnaire assessing adults' fears of different kinds of anxiety symptoms. To assess anxiety sensitivity with school-aged children, the Childhood Anxiety Sensitivity Index (CASI) was developed by Silverman, Fleisig, Rabian, and Peterson (1991). The child version is a modification of the ASI and includes the same 16 items contained in the adult version plus two additional items. Anxiety sensitivity in children is usually investigated with the CASI. It is a widely used and extensively researched self-report questionnaire for use with children in the field of anxiety disorders. There has been considerable discussion about anxiety sensitivity in adults. Many studies have investigated its factor structure. Some researchers have found support for a unitary construct, whereas others have found support for a multidimensional construct (see Zinbarg, Mohlman, & Hong, 1999). Anxiety sensitivity is currently generally accepted by most researchers as a hierarchically organized construct with one general (higher-order) factor consisting of several first-order factors (see reviews in Taylor, 1999). In spite of this consensus, there is still controversy about the number and nature of first-order factors loading on a single higher-order factor. The same debate can also be observed in anxiety sensitivity research in children. Table 1 gives an overview of the different results suggested for the factor structures of the CASI as obtained by various studies. Although some findings have suggested a two-factor solution (Chorpita and Daleiden, 2000 and Laurent et al., 1998) hierarchical models with one higher-order factor and three or four first-order factors are now more widely discussed. The two hierarchical models found by Silverman, Ginsburg, and Goedhart (1999) were confirmed by Van Widenfelt, Siebelink, Goedhart, and Treffers (2002) and also by Muris, Schmidt, Merkelbach, and Schouten (2001), who found a similar hierarchical structure (using a four-point Likert scale). Silverman, Goedhart, Barrett, and Turner (2003) summarized the different results from factor structure analysis of the CASI as well as the ASI, resulting in a 13-item CASI version. For this version, the authors suggested a hierarchical ordering of models with two, three, and four first-order factors (see Table 1).