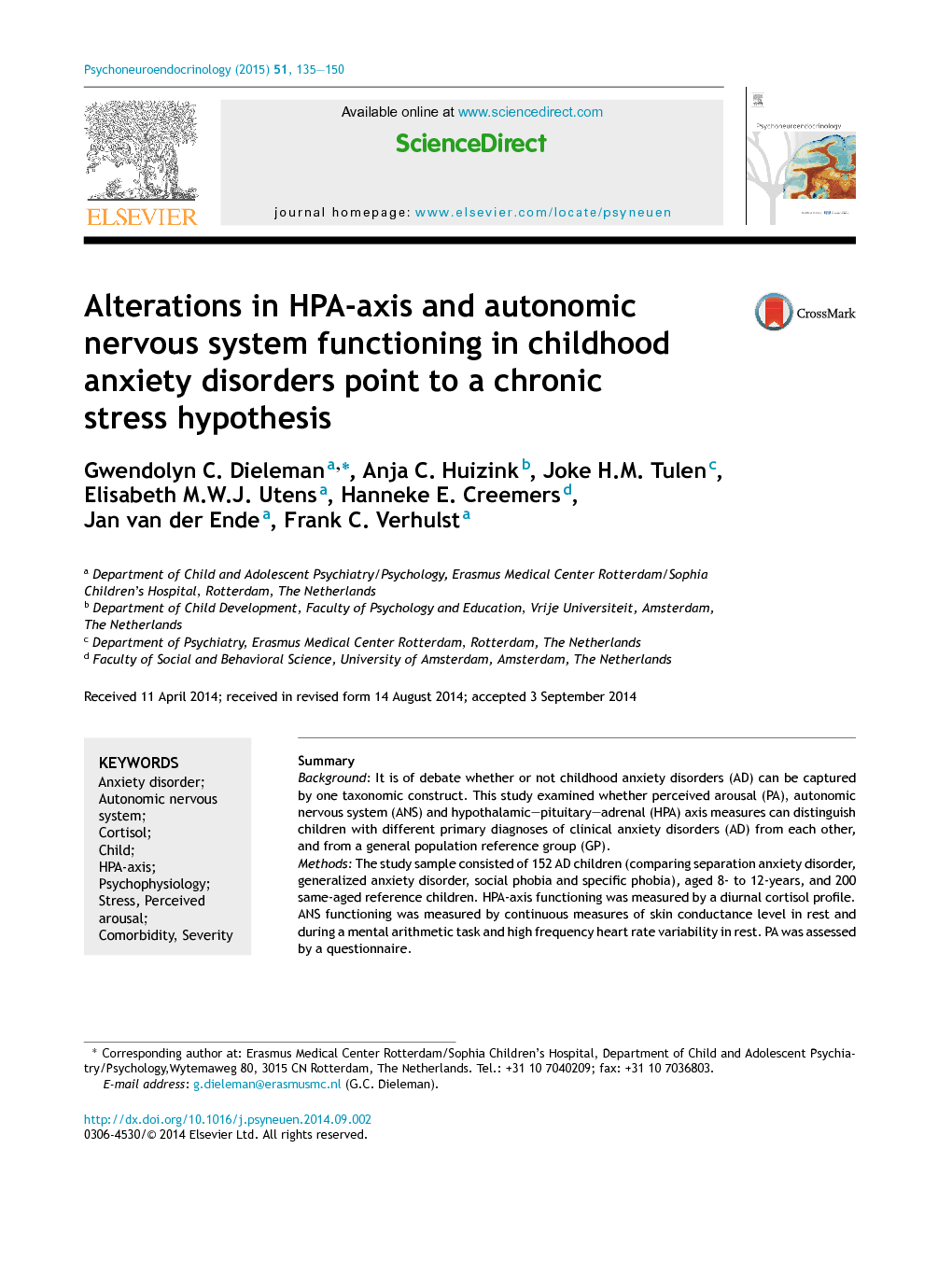 Background It is of debate whether or not childhood anxiety disorders (AD) can be captured by one taxonomic construct. This study examined whether perceived arousal (PA), autonomic nervous system (ANS) and hypothalamic–pituitary–adrenal (HPA) axis measures can distinguish children with different primary diagnoses of clinical anxiety disorders (AD) from each other, and from a general population reference group (GP). Methods The study sample consisted of 152 AD children (comparing separation anxiety disorder, generalized anxiety disorder, social phobia and specific phobia), aged 8- to 12-years, and 200 same-aged reference children. HPA-axis functioning was measured by a diurnal cortisol profile. ANS functioning was measured by continuous measures of skin conductance level in rest and during a mental arithmetic task and high frequency heart rate variability in rest. PA was assessed by a questionnaire. Results The AD sample showed lower high frequency heart rate variability during rest, heightened anticipatory PA, higher basal and reactive skin conductance levels and lower basal HPA-axis functioning compared to the GP sample. The existence of three or more clinical disorders, i.e. a high clinical ‘load’, was associated with lower basal HPA-axis functioning, higher skin conductance level and lower posttest PA. Specific phobia could be discerned from social phobia and separation anxiety disorder on higher skin conductance level. Conclusions Our findings indicated that children with AD have specific psychophysiological characteristics, which resemble the psychophysiological characteristics of chronic stress. A high clinical ‘load’ is associated with an altered ANS and HPA-axis functioning. Overall, ANS and HPA-axis functioning relate to AD in general, accept for specific phobia.

Anxiety disorders (AD) are among the most prevalent psychiatric disorders in children and adolescents (e.g. Costello et al., 2005). They are associated with impaired functioning, such as school dropout, social isolation, alcoholism, and suicide attempts, and an increased risk for developing other psychiatric disorders (Bittner et al., 2007). Hence, research into causes and correlates of childhood anxiety disorders is imperative to improve treatment and prognosis for children affected by these disorders. A complicating issue is whether distinctions between separate anxiety disorders in children can be made. High comorbidity rates between AD have been reported (e.g. Beesdo et al., 2009). This underlines the hypothesis of one taxonomic construct capturing childhood anxiety disorders. However, substantial heterogeneity exists in the age of onset of specific anxiety disorders (Beesdo et al., 2010), providing, in terms of taxonomy, an indicator to separate different types of anxiety disorders (Beesdo et al., 2009). Furthermore, age is also related to the clinical ‘load’; i.e. the number of anxiety disorders increases with age. Anxiety load is significantly associated with poorer outcome (Woodward and Fergusson, 2001). One could argue that the causes and correlates of a high anxiety ‘load’ may differ from those of a low anxiety ‘load’. One way to test the taxonomic construct of AD is to study the physiological correlates of childhood anxiety disorders, i.e. the activity of the hypothalamic–pituitary–adrenal (HPA) axis and the autonomic nervous system (ANS), two major physiological stress systems. During non-stress conditions the HPA-axis shows a diurnal pattern of cortisol secretion, with peak levels approximately 30 min after waking up and a subsequent decline during the day (Wust et al., 2000). Glucocorticoids can act both to augment and suppress sympathetically mediated changes in e.g. cardiovascular function, metabolism, and immune function. Normally, activation of these stress systems leads to behavioral and physical adaptive changes that improve an organism's ability to survive. However, children with an anxiety disorder may perceive the world as full of stressors that demand endless vigilance and coping, with no possibility to relax and to regard things as safe (Sapolsky, 2002). It can be hypothesized that these children function under conditions of persistent stress, with an excessive and prolonged stress system activation. This would result in increased and prolonged production of hypothalamic corticotropin releasing factor (CRF), cortisol and catecholamines (Pervanidou, 2008), which, in turn, could result in hypoactivation of the HPA-axis, as a compensatory down-regulation (Charmandari et al., 2005). Studies regarding the association between anxiety disorders and basal HPA-axis functioning in children are scarce and findings are inconclusive. Forbes et al. (2006) found higher peri-sleep-onset cortisol levels in children with an anxiety disorder compared to children with a depression or healthy control children, whereas Feder et al. (2004) found that anxious children exhibited significantly lower nighttime cortisol levels and a delayed rise in cortisol during the nighttime when compared to depressed and healthy children. In other studies no association was found (e.g. Terleph et al., 2006, Greaves-Lord et al., 2007 and Dieleman et al., 2010). However, Greaves-Lord et al. (2007) reported that young adolescents with persistent anxiety problems had higher morning cortisol levels and a higher awakening response. Several problems may have contributed to the inconsistency of these findings. The groups under study were dissimilar in methods of sampling, age, developmental status, and diagnostic status. Some studies used general population samples (e.g. Greaves-Lord et al., 2007), whereas others focused on clinical groups (e.g. Forbes et al., 2006), which are likely to display major differences in symptom severity and comorbidity. Next to that, differences in functioning of the HPA-axis could depend on the stage of the disorder (Pervanidou, 2008). Overall, research on ANS functioning in children with anxiety problems shows an increased activity of the sympathetic nervous system (e.g. Dietrich et al., 2007, Schmitz et al., 2011 and Kossowsky et al., 2012) and a decrease of parasympathetic control (e.g. Schmitz et al., 2011). Furthermore, previous studies suggest that high anxious adults have an increased perception of physiological sensations (e.g. Hoehn-Saric and McLeod, 2000), i.e. increased perceived arousal, sometimes even in the absence of an actual difference in physiological measures (e.g. Edelmann and Baker, 2002). At present, it is still unclear as to what extent ANS or HPA-axis activity relate to anxiety in general, or whether they are specific correlates of the different types of anxiety disorders. Few studies have compared the endocrine and autonomic profiles between different pediatric anxiety disorders, and if so the focus was on one specific anxiety disorder with a disorder-specific stimulus (i.e. Kossowsky et al., 2012). To our knowledge this is the first study to test whether anxiety load is associated with altered HPA-axis and ANS functioning. The present study's aim was to test whether HPA-axis (basal), ANS (basal and reactive) and perceived arousal (PA) measures can distinguish children (N = 154) aged 8–12 years with different primary diagnoses (separation anxiety disorder (SAD), generalized anxiety disorder (GAD), social phobia (SoPh) and/or specific phobia (SpPh)) of clinical anxiety disorders (AD) from each other, and from a same-aged general population reference group (GP) (N = 200). We hypothesized that children in the clinical anxiety sample show (1) elevated sympathetic and lowered parasympathetic activity compared to the general population sample. (2) Furthermore, we expected a pattern of hypoactivation of basal HPA-axis functioning, considering the severity and chronicity of perceived stress in a clinical AD sample, when compared to a general population reference group. (3) Within the AD sample we hypothesized that there would be no difference in activity of both ANS and HPA-axis between different types of anxiety disorders, because of the known high rates of comorbidity in childhood anxiety disorders. (4) Finally, we hypothesized that children with a high anxiety load in the clinical sample show hypoactivation of basal HPA-axis functioning, have higher sympathetic functioning and lower parasympathetic functioning, and higher perceived arousal in rest and stress conditions when compared to children with a low anxiety load.

Our findings indicate that children with an anxiety disorder can be distinguished on several psychophysiological characteristics from healthy children. The results underline the hypothesis that ANS and HPA-axis functioning relate to anxiety disorders in general, and only heightened sympathetic (re)acitivity is a specific correlate for specific phobia, which confirms the existing genetic and longitudinal evidence for specific phobia as separate taxonomic construct. Furthermore, our study found some evidence in support of the hypothesis that a child with a clinical anxiety disorder functions under chronic stressful conditions, with concomitant changes in the activity of both the stress systems. This notion is underlined by the finding that a high clinical ‘load’ in the clinical sample was associated with an even further deviation of basal HPA-axis functioning and sympathetic functioning. This might indicate that there are already biological underpinnings of the ‘load’ of anxiety disorders in childhood, which might be predictive of adverse outcomes later in life. Future research is needed to replicate our findings in other clinical samples. Furthermore, the cross-sectional character of this study makes it difficult to draw conclusions regarding the causality of deviations in HPA-axis and ANS functioning in children with an AD, therefore longitudinal studies in children in which the course and severity of anxiety symptoms and disorders are related to basal and reactive HPA and ANS functioning are needed.