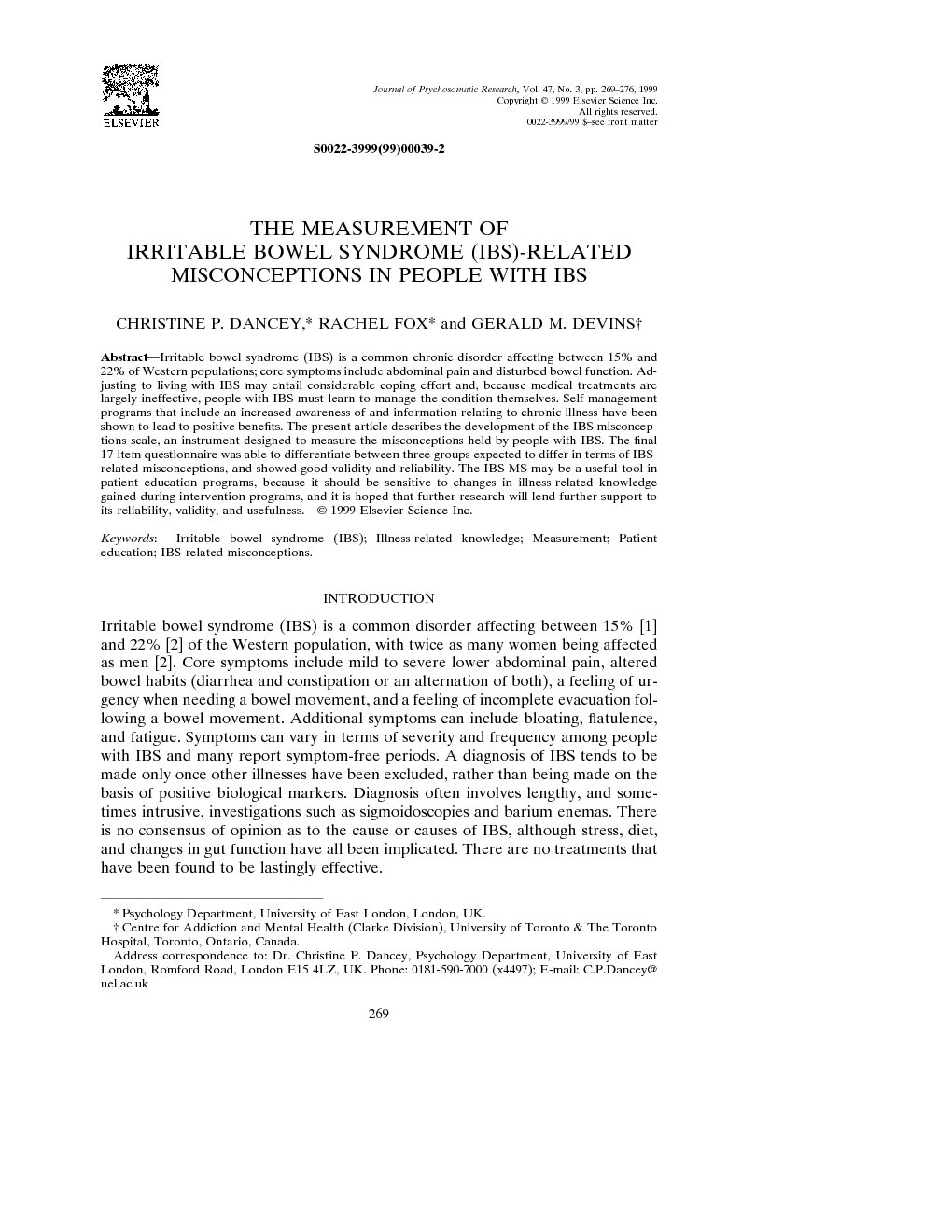 Irritable bowel syndrome (IBS) is a common chronic disorder affecting between 15% and 22% of Western populations; core symptoms include abdominal pain and disturbed bowel function. Adjusting to living with IBS may entail considerable coping effort and, because medical treatments are largely ineffective, people with IBS must learn to manage the condition themselves. Self-management programs that include an increased awareness of and information relating to chronic illness have been shown to lead to positive benefits. The present article describes the development of the IBS misconceptions scale, an instrument designed to measure the misconceptions held by people with IBS. The final 17-item questionnaire was able to differentiate between three groups expected to differ in terms of IBS-related misconceptions, and showed good validity and reliability. The IBS-MS may be a useful tool in patient education programs, because it should be sensitive to changes in illness-related knowledge gained during intervention programs, and it is hoped that further research will lend further support to its reliability, validity, and usefulness.

Irritable bowel syndrome (IBS) is a common disorder affecting between 15% [1] and 22% [2] of the Western population, with twice as many women being affected as men [2]. Core symptoms include mild to severe lower abdominal pain, altered bowel habits (diarrhea and constipation or an alternation of both), a feeling of urgency when needing a bowel movement, and a feeling of incomplete evacuation following a bowel movement. Additional symptoms can include bloating, flatulence, and fatigue. Symptoms can vary in terms of severity and frequency among people with IBS and many report symptom-free periods. A diagnosis of IBS tends to be made only once other illnesses have been excluded, rather than being made on the basis of positive biological markers. Diagnosis often involves lengthy, and sometimes intrusive, investigations such as sigmoidoscopies and barium enemas. There is no consensus of opinion as to the cause or causes of IBS, although stress, diet, and changes in gut function have all been implicated. There are no treatments that have been found to be lastingly effective. In addition to the physical symptoms, people with IBS have been found to experience higher levels of anxiety and depression than people with other chronic illnesses [3], and to be more affected by their symptoms than people with other, more serious diseases [4]. Research has shown that IBS can have detrimental effects in many areas of the lives of its sufferers; their social lives are restricted and close personal relationships can be affected. Many hide their symptoms from others, thus denying themselves valuable social support known to improve both self-esteem and levels of depression 5 and 6. People with IBS sometimes cease taking part in potentially pleasurable activities such as sports and travel due to the unpredictable nature of their symptoms, and an estimated 5–8% are nonemployed due to their IBS 7 and 8. Despite increasing interest into the psychological and social effects of IBS there has been no published research into factors that may contribute to the psychosocial well-being of people with IBS. Adjusting to living with IBS may entail considerable coping effort and, because medical treatments are largely ineffective, people with IBS must learn to manage the condition themselves. Self-management programs, which include an increased awareness of and information relating to specific chronic illnesses, suggest that people can be successfully helped to manage their condition, and it is now widely accepted that the well-informed patient is better equipped to participate in his or her own health care 9 and 10. Recent research has shown that increased illness-related knowledge in disorders such as epilepsy can restore confidence and self-esteem, improve self-management and make people more aware of their needs and of the services available to them. Patient education has also been found to help people with chronic conditions to be able to explain to others about their illness, thus promoting a more positive image of the illness [11] and helping to reduce the feeling of stigma that sometimes accompanies chronic illness. Improved patient knowledge has also been found to lead to improvements in the health status of people with chronic illnesses such as epilepsy, asthma, and arthritis 12 and 13, and to reduce the number of patient visits to general practitioners [11]. These issues are particularly relevant in the management of IBS; many people who are diagnosed with IBS have never heard of the disorder, and find that they are confused by the (often contradictory) information they are given [7]. This reflects the many diverse views by health professionals as to the causes, treatment, and role of psychosocial factors involved in IBS. Also, many people with IBS are worried that they may be suffering from a more serious disease such as bowel cancer, and indeed the misconception that IBS can actually lead to such diseases is not uncommon. The anxiety felt by people with IBS may reflect such misconceptions as well as the uncertainty surrounding the diagnosis, causes, and treatment of IBS. Challenging such misconceptions may be of benefit to such people and, given the positive effects of interventions designed to increase illness-related knowledge in people with other chronic conditions, it would be of value to investigate the misconceptions held by people with IBS, and to determine whether such misconceptions relate to psychological factors such as anxiety. However, so far there has been no published research in this area. To carry out such research, it was first necessary to devise an instrument that could measure the IBS-related misconceptions held by people with IBS. As yet, no such instrument exists for IBS, although several psychometrically sound instruments designed to measure illness-related knowledge in other chronic illnesses, such as end-stage renal disease and diabetes, have been developed recently 14 and 15. A measure of IBS-related misconceptions would be useful in assessing the success of interventions designed to increase the understanding of IBS, and to help people manage their condition more effectively. Developing a measure of illness-related misconceptions for people with IBS requires additional considerations above and beyond those required for other chronic illness. Medical understanding of the triggers, causes, and successful treatment of IBS is less certain than for other chronic conditions. The nature of the symptoms and their severity and frequency varies considerably in samples of people with IBS and experts sometimes disagree in their opinions relating to etiology and efficacy of treatment. Thus, in generating items for inclusion in a measure of IBS-related misconceptions, it is particularly important that all items are ones for which there is little disagreement among experts as to the accuracy of the statements. For the test to be sensitive, it needs to be able to discriminate between groups expected to differ in terms of their misconceptions relating to IBS. The present study describes the development of the “IBS-related misconceptions scale” (IBS-MS).

In total, 11 completed questionnaires were returned within the allotted time (36.7%). One of the 11 was not completed fully and thus had to be excluded, leaving a final total of 10 judgments for analysis. For inclusion in the revised IBS-MS, items needed to be deemed “suitable” or “extremely suitable” by seven or more of the IBS workers (a cumulative percentage of 70% or more). In total, 77 items had a cumulative percentage agreement of less than 70% and were thus deleted, leaving a final pool of 38 items for inclusion in the revised IBS-MS. The items covered all of the original eight domains.