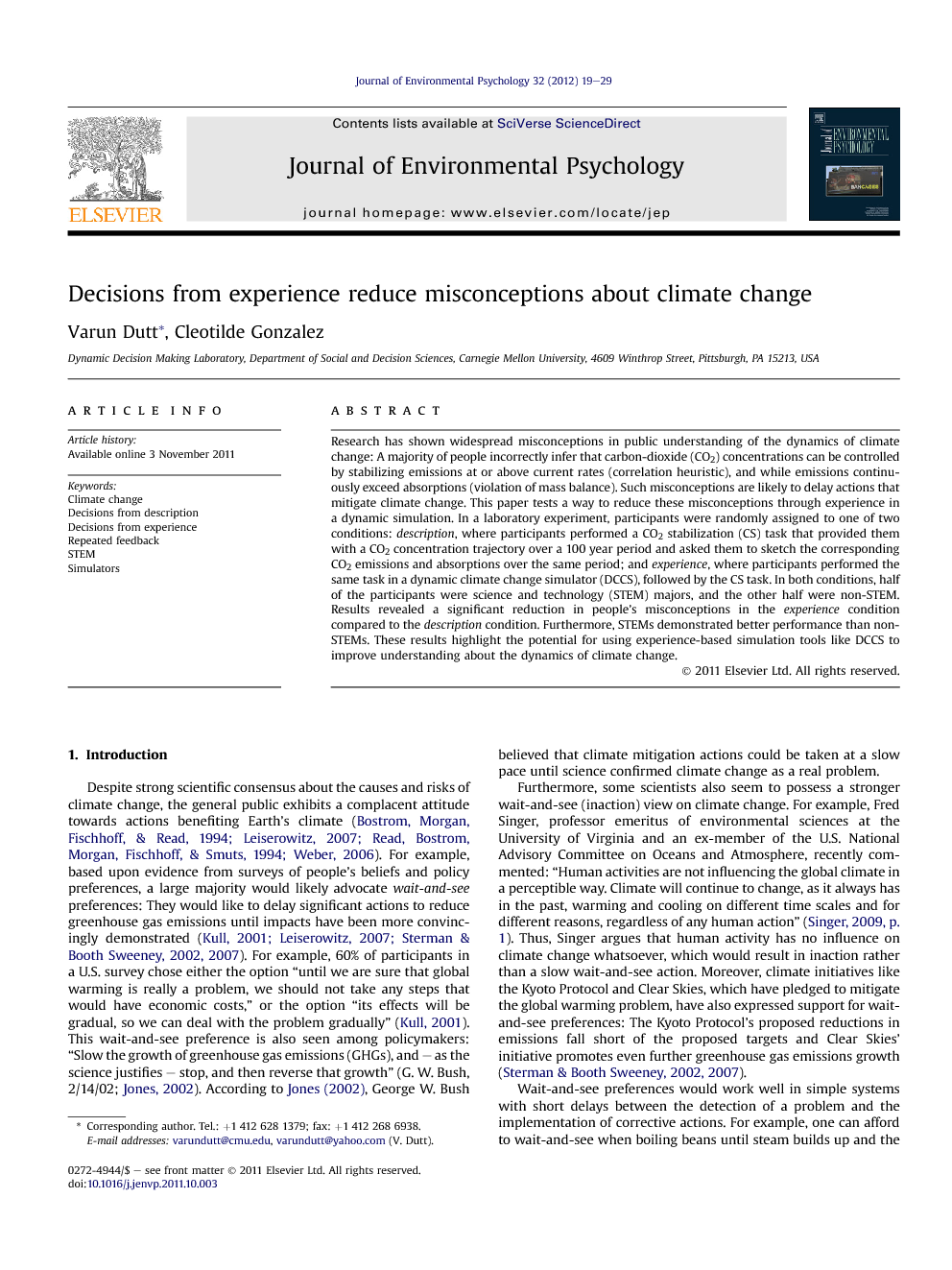 Research has shown widespread misconceptions in public understanding of the dynamics of climate change: A majority of people incorrectly infer that carbon-dioxide (CO2) concentrations can be controlled by stabilizing emissions at or above current rates (correlation heuristic), and while emissions continuously exceed absorptions (violation of mass balance). Such misconceptions are likely to delay actions that mitigate climate change. This paper tests a way to reduce these misconceptions through experience in a dynamic simulation. In a laboratory experiment, participants were randomly assigned to one of two conditions: description, where participants performed a CO2 stabilization (CS) task that provided them with a CO2 concentration trajectory over a 100 year period and asked them to sketch the corresponding CO2 emissions and absorptions over the same period; and experience, where participants performed the same task in a dynamic climate change simulator (DCCS), followed by the CS task. In both conditions, half of the participants were science and technology (STEM) majors, and the other half were non-STEM. Results revealed a significant reduction in people’s misconceptions in the experience condition compared to the description condition. Furthermore, STEMs demonstrated better performance than non-STEMs. These results highlight the potential for using experience-based simulation tools like DCCS to improve understanding about the dynamics of climate change.

Despite strong scientific consensus about the causes and risks of climate change, the general public exhibits a complacent attitude towards actions benefiting Earth’s climate (Bostrom et al., 1994, Leiserowitz, 2007, Read et al., 1994 and Weber, 2006). For example, based upon evidence from surveys of people’s beliefs and policy preferences, a large majority would likely advocate wait-and-see preferences: They would like to delay significant actions to reduce greenhouse gas emissions until impacts have been more convincingly demonstrated ( Kull, 2001, Leiserowitz, 2007, Sterman and Booth Sweeney, 2002 and Sterman and Booth Sweeney, 2007). For example, 60% of participants in a U.S. survey chose either the option “until we are sure that global warming is really a problem, we should not take any steps that would have economic costs,” or the option “its effects will be gradual, so we can deal with the problem gradually” ( Kull, 2001). This wait-and-see preference is also seen among policymakers: “Slow the growth of greenhouse gas emissions (GHGs), and – as the science justifies – stop, and then reverse that growth” (G. W. Bush, 2/14/02; Jones, 2002). According to Jones (2002), George W. Bush believed that climate mitigation actions could be taken at a slow pace until science confirmed climate change as a real problem. Furthermore, some scientists also seem to possess a stronger wait-and-see (inaction) view on climate change. For example, Fred Singer, professor emeritus of environmental sciences at the University of Virginia and an ex-member of the U.S. National Advisory Committee on Oceans and Atmosphere, recently commented: “Human activities are not influencing the global climate in a perceptible way. Climate will continue to change, as it always has in the past, warming and cooling on different time scales and for different reasons, regardless of any human action” (Singer, 2009, p. 1). Thus, Singer argues that human activity has no influence on climate change whatsoever, which would result in inaction rather than a slow wait-and-see action. Moreover, climate initiatives like the Kyoto Protocol and Clear Skies, which have pledged to mitigate the global warming problem, have also expressed support for wait-and-see preferences: The Kyoto Protocol’s proposed reductions in emissions fall short of the proposed targets and Clear Skies’ initiative promotes even further greenhouse gas emissions growth (Sterman and Booth Sweeney, 2002 and Sterman and Booth Sweeney, 2007). Wait-and-see preferences would work well in simple systems with short delays between the detection of a problem and the implementation of corrective actions. For example, one can afford to wait-and-see when boiling beans until steam builds up and the cooker whistles because there is a short delay between the whistle and removing the cooker from the flame. Unfortunately for a complex system like Earth’s climate, there are much longer delays between the decision to mitigate emissions and the corresponding changes in atmospheric GHG concentrations (IPCC, 2007, Sterman, 2008, Sterman and Booth Sweeney, 2002 and Sterman and Booth Sweeney, 2007). Prior research shows that people often ignore long feedback delays in complex systems (Sterman, 1989), and those who exhibit wait-and-see preferences might be acting under the implicit misconception of very short delays in Earth’s climate system (Sterman, 2008, Sterman and Booth Sweeney, 2002 and Sterman and Booth Sweeney, 2007). As there are long feedback delays, however, wait-and-see preferences become problematic. Because even if mitigation actions are taken, atmospheric CO2 accumulation would continue to rise until emissions fell below the absorptions rate. Average atmospheric temperature would then peak, and consequences such as rising sea levels and thermal expansion would continue (Meehl et al., 2005 and Wigley, 2005). Therefore, wait-and-see preferences are likely to cause abrupt, persistent, and costly regime changes on Earth in the future (Alley et al., 2003 and Scheffer et al., 2001). Prior research has shown that people’s misconceptions about the climate system are related to their own deficient mental models1: The general public lacks training in climatology and has little understanding of climate processes (Bostrom et al., 1994, Kasemir et al., 2000, Kempton, 1997, Morgan et al., 2002, Palmgren et al., 2004 and Read et al., 1994). In this paper, however, we argue that people’s misconceptions are due to a more fundamental limitation of their mental models: A weak understanding of accumulation and mass balance concepts rather than to the particulars of climatology and the climate system. Cronin, Gonzalez, and Sterman (2009) have demonstrated that as the relationship between inflows and outflows become more complex, people tend to rely more on simple but erroneous heuristics. According to Cronin et al. (2009), people rely on the “correlation heuristic,” whereby they wrongly infer that the system’s accumulations are positively correlated to its inflows. Through laboratory studies, Sterman (2008) and Sterman and Booth Sweeney (2007) have shown that people’s wait-and-see preferences on climate are related to their reliance on the correlation heuristic. For climate, relying on the correlation heuristic means wrongly inferring that an accumulation (CO2 concentration) follows the same path as the inflow (CO2 emissions); hence, stabilizing emissions would rapidly stabilize the concentration, and emissions cuts would quickly reduce the concentration and damages from climate change. Consequently, people who rely on the heuristic would demonstrate wait-and-see preferences because they would significantly underestimate the delay between reductions in CO2 emissions and in the CO2 concentration. They would also underestimate the magnitude of emission reductions needed to stabilize the concentration. Furthermore, Sterman and Booth Sweeney (2007) have also shown that people’s wait-and-see preferences are also related to the violation of mass balance, whereby people incorrectly infer that atmospheric CO2 concentration can be stabilized even when emissions exceeds absorptions. Violating mass balance leads to wait-and-see preferences because people think the current state of the climate system, where emissions are double that of absorptions (IPCC, 2007), would not pose a problem to future stabilization.