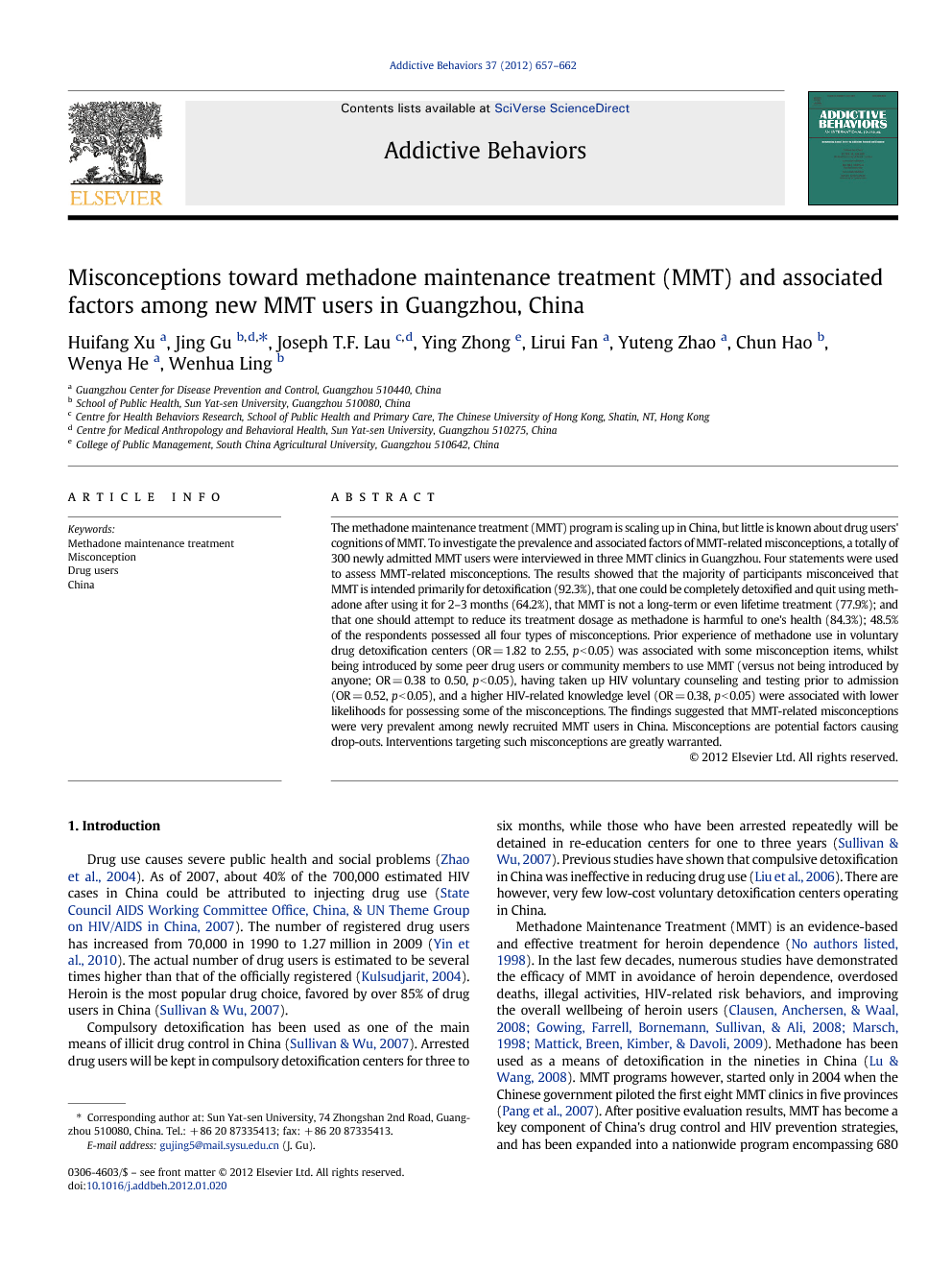 The methadone maintenance treatment (MMT) program is scaling up in China, but little is known about drug users' cognitions of MMT. To investigate the prevalence and associated factors of MMT-related misconceptions, a totally of 300 newly admitted MMT users were interviewed in three MMT clinics in Guangzhou. Four statements were used to assess MMT-related misconceptions. The results showed that the majority of participants misconceived that MMT is intended primarily for detoxification (92.3%), that one could be completely detoxified and quit using methadone after using it for 2–3 months (64.2%), that MMT is not a long-term or even lifetime treatment (77.9%); and that one should attempt to reduce its treatment dosage as methadone is harmful to one's health (84.3%); 48.5% of the respondents possessed all four types of misconceptions. Prior experience of methadone use in voluntary drug detoxification centers (OR = 1.82 to 2.55, p < 0.05) was associated with some misconception items, whilst being introduced by some peer drug users or community members to use MMT (versus not being introduced by anyone; OR = 0.38 to 0.50, p < 0.05), having taken up HIV voluntary counseling and testing prior to admission (OR = 0.52, p < 0.05), and a higher HIV-related knowledge level (OR = 0.38, p < 0.05) were associated with lower likelihoods for possessing some of the misconceptions. The findings suggested that MMT-related misconceptions were very prevalent among newly recruited MMT users in China. Misconceptions are potential factors causing drop-outs. Interventions targeting such misconceptions are greatly warranted.

Drug use causes severe public health and social problems (Zhao et al., 2004). As of 2007, about 40% of the 700,000 estimated HIV cases in China could be attributed to injecting drug use (State Council AIDS Working Committee Office, China, & UN Theme Group on HIV/AIDS in China, 2007). The number of registered drug users has increased from 70,000 in 1990 to 1.27 million in 2009 (Yin et al., 2010). The actual number of drug users is estimated to be several times higher than that of the officially registered (Kulsudjarit, 2004). Heroin is the most popular drug choice, favored by over 85% of drug users in China (Sullivan & Wu, 2007). Compulsory detoxification has been used as one of the main means of illicit drug control in China (Sullivan & Wu, 2007). Arrested drug users will be kept in compulsory detoxification centers for three to six months, while those who have been arrested repeatedly will be detained in re-education centers for one to three years (Sullivan & Wu, 2007). Previous studies have shown that compulsive detoxification in China was ineffective in reducing drug use (Liu et al., 2006). There are however, very few low-cost voluntary detoxification centers operating in China. Methadone Maintenance Treatment (MMT) is an evidence-based and effective treatment for heroin dependence (No authors listed, 1998). In the last few decades, numerous studies have demonstrated the efficacy of MMT in avoidance of heroin dependence, overdosed deaths, illegal activities, HIV-related risk behaviors, and improving the overall wellbeing of heroin users (Clausen et al., 2008, Gowing et al., 2008, Marsch, 1998 and Mattick et al., 2009). Methadone has been used as a means of detoxification in the nineties in China (Lu & Wang, 2008). MMT programs however, started only in 2004 when the Chinese government piloted the first eight MMT clinics in five provinces (Pang et al., 2007). After positive evaluation results, MMT has become a key component of China's drug control and HIV prevention strategies, and has been expanded into a nationwide program encompassing 680 clinics covering 242,000 heroin users by the end of 2009 (Pang et al., 2007, Qian et al., 2006 and Yin et al., 2010). MMT is a replacement therapy, rather than a curative treatment (Joseph, Stancliff, & Langrod, 2000). Its effectiveness rests upon a long-term or even lifetime treatment with appropriate dosages (Joseph et al., 2000). However, MMT-related misconceptions are prevalent among drug users. In the literature, the most popular misconceptions included that MMT is harmful to users' health (e.g., ‘methadone gets into bones’, ‘methadone rots your teeth’) (Peterson et al., 2010 and Winstock et al., 2008), higher dosages of methadone are more harmful than lower dosages (Stancliff, Myers, Steiner, & Drucker, 2002), disagreement on the long-term nature of the treatment (Schwartz et al., 2008), and MMT users should get off MMT (Stancliff et al., 2002), among others. Almost all of these studies were conducted in North America, and so far there is no study investigating MMT users' misconceptions toward MMT in China. Evidence has showed that peoples' perceptions about treatment would influence their compliance and treatment outcomes (Nelson-Zlupko et al., 1996, Shen et al., 2000, Siqueland et al., 2004 and Zaller et al., 2009). Misconceptions toward MMT may result in high drop-out rates. Studies among MMT clients showed that correct perceptions toward MMT were associated with longer durations of treatment and less psychiatric problems (Kasarabada, Hser, Boles, & Huang, 2002). In China, the number of MMT clinics is still on the rise, while previous studies have reported high drop-out rates of 40–60% within six-month periods (Chen et al., 2009, Li et al., 2009 and Pang et al., 2007). It is crucial to understand Chinese MMT users' views about MMT in order to design interventions that are effective and culturally appropriate in order to improve MMT retention in China. The present study investigated the prevalence of several MMT-related misconceptions among drug users who were newly admitted to three MMT clinics in China. Factors associated with these misconceptions were identified. We hypothesized that i) misconceptions toward MMT would be prevalent among MMT users, and ii) such misconceptions would be associated with MMT users' prior usage of methadone in voluntary drug detoxification centers, prior exposure to other HIV-related services, by whom the participant was introduced to use MMT and other factors such as the study site and the level of HIV-related knowledge.