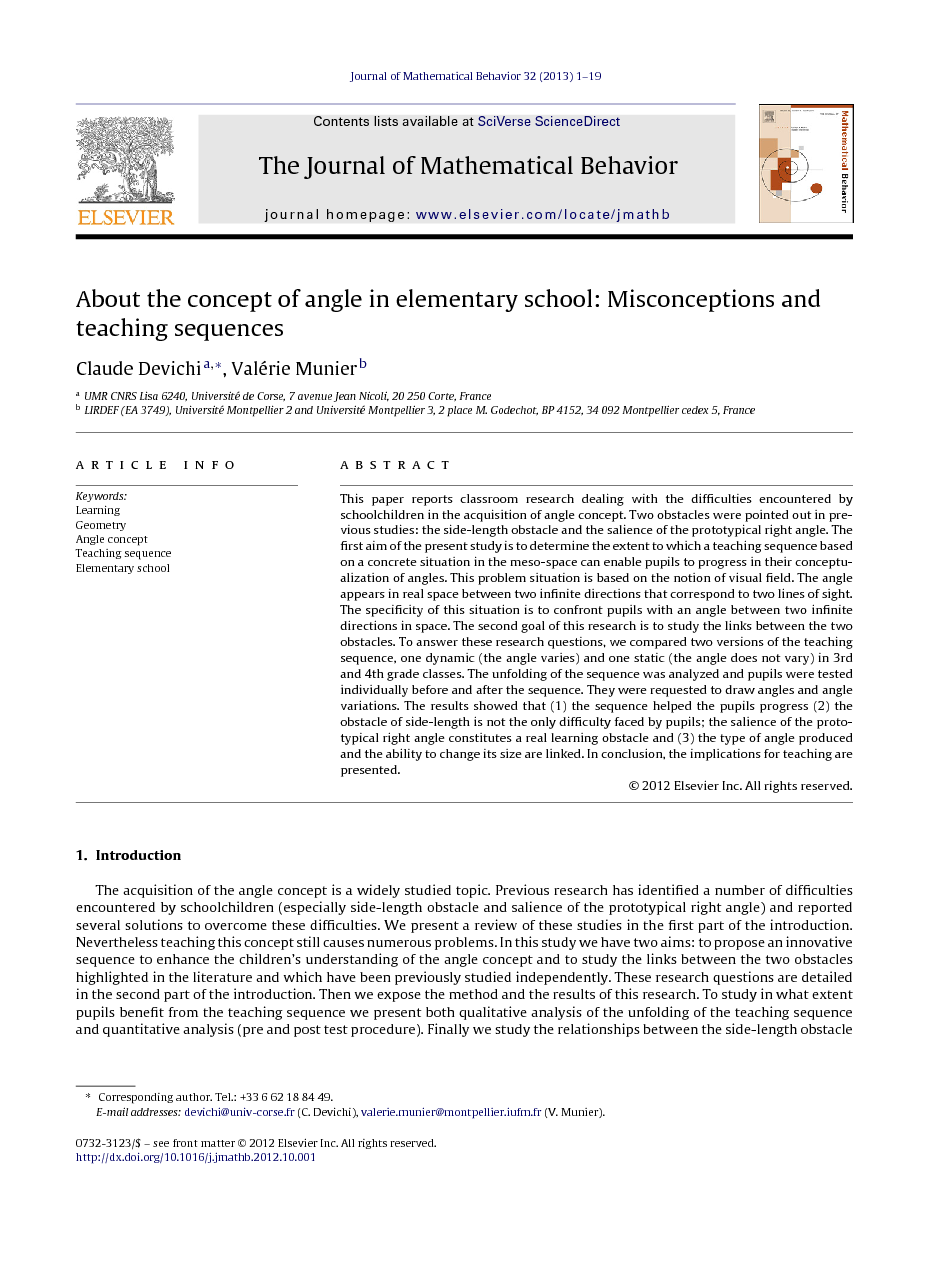 This paper reports classroom research dealing with the difficulties encountered by schoolchildren in the acquisition of angle concept. Two obstacles were pointed out in previous studies: the side-length obstacle and the salience of the prototypical right angle. The first aim of the present study is to determine the extent to which a teaching sequence based on a concrete situation in the meso-space can enable pupils to progress in their conceptualization of angles. This problem situation is based on the notion of visual field. The angle appears in real space between two infinite directions that correspond to two lines of sight. The specificity of this situation is to confront pupils with an angle between two infinite directions in space. The second goal of this research is to study the links between the two obstacles. To answer these research questions, we compared two versions of the teaching sequence, one dynamic (the angle varies) and one static (the angle does not vary) in 3rd and 4th grade classes. The unfolding of the sequence was analyzed and pupils were tested individually before and after the sequence. They were requested to draw angles and angle variations. The results showed that (1) the sequence helped the pupils progress (2) the obstacle of side-length is not the only difficulty faced by pupils; the salience of the prototypical right angle constitutes a real learning obstacle and (3) the type of angle produced and the ability to change its size are linked. In conclusion, the implications for teaching are presented.

The acquisition of the angle concept is a widely studied topic. Previous research has identified a number of difficulties encountered by schoolchildren (especially side-length obstacle and salience of the prototypical right angle) and reported several solutions to overcome these difficulties. We present a review of these studies in the first part of the introduction. Nevertheless teaching this concept still causes numerous problems. In this study we have two aims: to propose an innovative sequence to enhance the children's understanding of the angle concept and to study the links between the two obstacles highlighted in the literature and which have been previously studied independently. These research questions are detailed in the second part of the introduction. Then we expose the method and the results of this research. To study in what extent pupils benefit from the teaching sequence we present both qualitative analysis of the unfolding of the teaching sequence and quantitative analysis (pre and post test procedure). Finally we study the relationships between the side-length obstacle and the prototypical right angle obstacle. In the last part of the paper, we discuss the results and the implications of this research for teaching. 1.1. The concept of angle: a multifaceted concept Research on the angle concept was historically conducted within a Piagetian approach to children's construction of representational space (Piaget and Inhelder, 1956 and Piaget et al., 1960). For these authors, the same steps are taken to build representational space as those taken for perceptual-motor space. The process begins with the acquisition of topological relations (inside–outside, next to, open–closed), and then goes on to projective and Euclidean relations. Accordingly, a child's representation of space is topological before the age of 7 and then simultaneously becomes projective and Euclidean. The angle has a particular status in this approach because, according to Piaget and Inhelder (1956), “It is the analysis of the angle which marks the transition from topological relationships to the perception of Euclidean ones. It is not the straight line itself which the child contrasts with round shapes, but rather the conjunction of straight lines which go to form an angle” (p. 30). Mitchelmore and White (1998) consider that the angle is a highly complex concept and Keiser (2004) highlights the similarities between sixth-grade students’ developing notion of angle and mathematicians’ struggles to define this complex concept. According to Henderson and Taimina (2005) “no formal definition can capture all aspects of our experience of what an angle is” (p. 38). An angle can be defined in at least three different ways: as a rotation angle (turning), as a sector angle (the quantity shared by the set of all superimposed angular sectors), and as a pair of half lines that extend from a common point (openness or inclination). This multifaceted concept (Mitchelmore & White, 2000) is constructed slowly and progressively (Lehrer et al., 1998, Mitchelmore, 1997 and Mitchelmore, 1998; for the developmental stages, see Van Hiele, 1986). The construction process runs into numerous obstacles. In his review Mitchelmore (1998) reported for example that many students believe that the size of an angle depends on the radius of the arc marking the angle or that one arm must be horizontal and the direction always counterclockwise. The principal obstacle often found in literature is that many pupils think that the angle's size depends on the length of its arms. This idea was also suggested in Piaget et al. (1960) study, where children were asked to reproduce a geometric figure composed of two complementary angles. In short, until they were 9 years old, the children did not see the figure as a system of angles and they reproduced the figure based mainly on the one-dimensional measure of the line segments, without taking the space between them into account. This study already brought out that children focus on the length of an angle's sides, a fact that will become the major obstacle reported in the research on teaching the concept of angle (Clements, 2003, Close, 1982, Fyhn, 2008, Kieren, 1986, Mitchelmore, 1998 and Outhred, 1987). Furthermore, Mitchelmore (1998) also showed that children have great difficulty in coordinating the different aspects of the angle involved in various physical situations (slope, intersection, turn, corner, road bend, etc.).