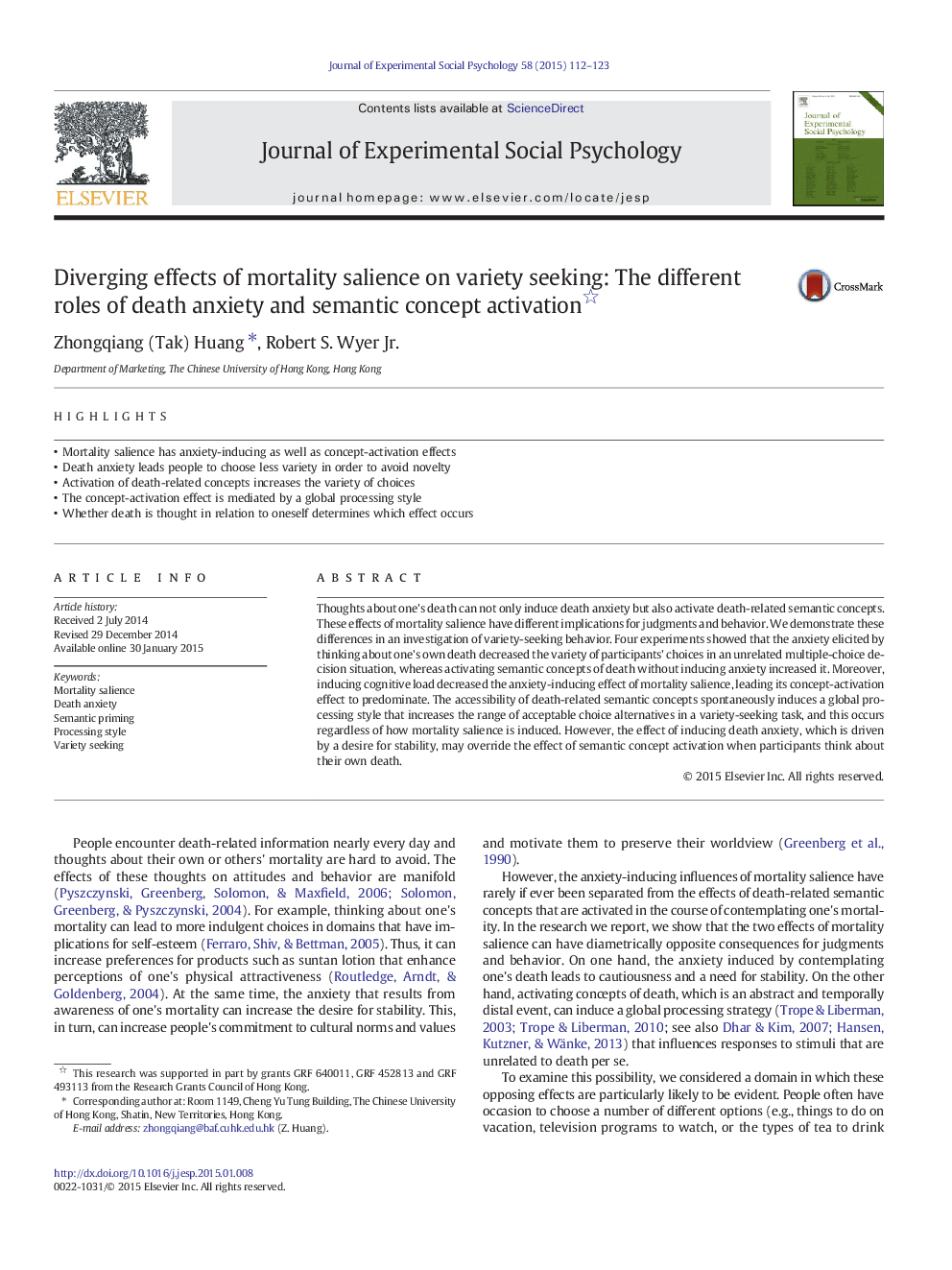 Thoughts about one's death can not only induce death anxiety but also activate death-related semantic concepts. These effects of mortality salience have different implications for judgments and behavior. We demonstrate these differences in an investigation of variety-seeking behavior. Four experiments showed that the anxiety elicited by thinking about one's own death decreased the variety of participants' choices in an unrelated multiple-choice decision situation, whereas activating semantic concepts of death without inducing anxiety increased it. Moreover, inducing cognitive load decreased the anxiety-inducing effect of mortality salience, leading its concept-activation effect to predominate. The accessibility of death-related semantic concepts spontaneously induces a global processing style that increases the range of acceptable choice alternatives in a variety-seeking task, and this occurs regardless of how mortality salience is induced. However, the effect of inducing death anxiety, which is driven by a desire for stability, may override the effect of semantic concept activation when participants think about their own death.

People encounter death-related information nearly every day and thoughts about their own or others' mortality are hard to avoid. The effects of these thoughts on attitudes and behavior are manifold (Pyszczynski et al., 2006 and Solomon et al., 2004). For example, thinking about one's mortality can lead to more indulgent choices in domains that have implications for self-esteem (Ferraro, Shiv, & Bettman, 2005). Thus, it can increase preferences for products such as suntan lotion that enhance perceptions of one's physical attractiveness (Routledge, Arndt, & Goldenberg, 2004). At the same time, the anxiety that results from awareness of one's mortality can increase the desire for stability. This, in turn, can increase people's commitment to cultural norms and values and motivate them to preserve their worldview (Greenberg et al., 1990). However, the anxiety-inducing influences of mortality salience have rarely if ever been separated from the effects of death-related semantic concepts that are activated in the course of contemplating one's mortality. In the research we report, we show that the two effects of mortality salience can have diametrically opposite consequences for judgments and behavior. On one hand, the anxiety induced by contemplating one's death leads to cautiousness and a need for stability. On the other hand, activating concepts of death, which is an abstract and temporally distal event, can induce a global processing strategy (Trope and Liberman, 2003 and Trope and Liberman, 2010; see also Dhar and Kim, 2007 and Hansen et al., 2013) that influences responses to stimuli that are unrelated to death per se. To examine this possibility, we considered a domain in which these opposing effects are particularly likely to be evident. People often have occasion to choose a number of different options (e.g., things to do on vacation, television programs to watch, or the types of tea to drink over a period of several days). In these conditions, people could either choose the same option repeatedly (e.g., to play golf every day while on vacation) or choose a variety of options (e.g., to play golf, to surf at the beach, and to visit a museum). Variety seeking could increase with the breadth of the concepts that individuals use in construing the choice alternatives (Kahn and Isen, 1993, Laran, 2010, Pham and Chang, 2010 and Viswanathan and Childers, 1999). However, it could decrease with the motivation to avoid novel and unfamiliar options (Liberman, Idson, Camacho, & Higgins, 1999). To the extent that everyday life experiences spontaneously activate concepts of mortality, they could influence the extent to which these opposite tendencies are manifested, depending on whether the concepts activated are accompanied by death anxiety. These considerations suggest that differences in variety seeking not only provide a diagnostic tool in separating the concept-activation and anxiety-arousing effects of mortality salience but also have implications for an understanding of its effects on decision making outside the laboratory. The two effects of mortality salience are hard to separate using traditional manipulations of this factor (e.g., Greenberg et al., 1986 and Solomon et al., 1991). That is, the anxiety that is induced by thinking about one's own death is necessarily elicited by semantic concepts that compose these thoughts. However, death-related concepts may be activated without inducing anxiety. By employing this strategy, we found that activating death-related concepts without inducing death anxiety increased the variety of options that individuals chose in a multiple-option decision situation whereas inducing death anxiety decreased the variety of their choices. The effects of death anxiety are particularly evident when the choice alternatives are unfamiliar. At the same time, putting individuals under cognitive load interfered with their attempt to defend against death anxiety, leading the consequences of activating death-related semantic concepts to become more dominant. We also showed that the crucial distinction between these effects is the extent to which people experience anxiety about their own mortality rather than about others' mortality or mortality in general. Thus, if individuals think about another's death without considering their own, the anxiety-mediated effect of mortality salience is not apparent.