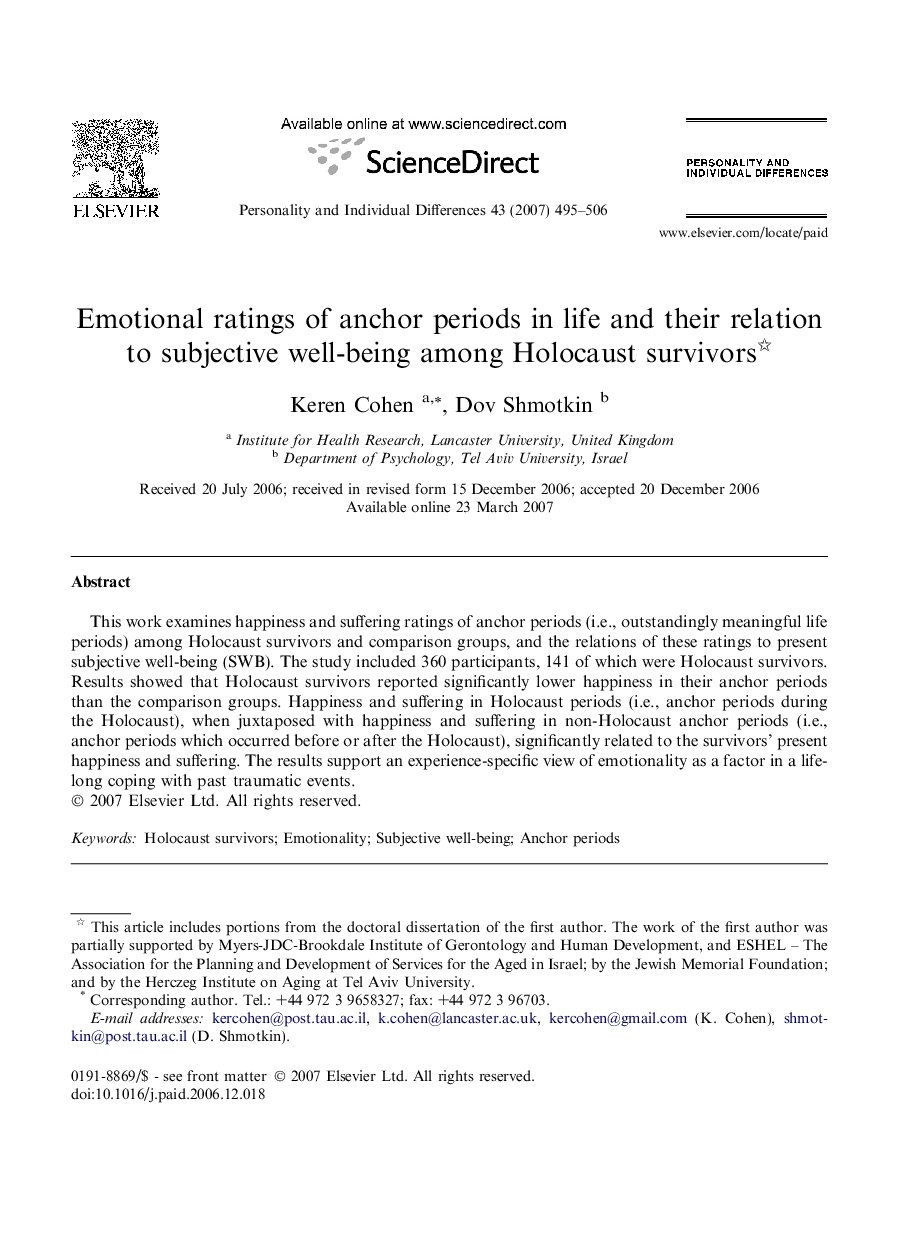 1. Introduction Life stories are usually considered to be of fundamental significance for the self, emotions, and the experience of personhood (Bluck and Habermas, 2001 and McAdams, 1993). A life story is often exposed in an answer given to a broad question such as “tell me your story of life”. However, one can also assess life stories by concentrating on specific periods or episodes in life (Singer & Bluck, 2001). Accordingly, Shmotkin, 2005 and Shmotkin et al., 2006 offered the concept of “anchor periods,” which are the personally perceived most meaningful periods in one’s life (the happiest period, the worst period, etc.) delimited by a time frame (i.e., having a distinct starting point and ending point) and possibly include several events within that frame. There are numerous aspects of examining the anchor periods, such as themes, structures, etc. This study addresses emotional recollections of the anchor periods among Holocaust survivors and their relation to subjective well-being (SWB), which refers to the overall evaluation that people make about the quality of their lives (Shmotkin, 2005). SWB has been traditionally viewed as composed of affective (happiness) and cognitive (satisfaction with life) dimensions (Andrews & Withey, 1976). Happiness is defined as a balance between positive affect and negative affect, conceived as separate structures (Bradburne, 1969). Although often used to refer to SWB at large, the concept of happiness retains its predominantly emotional nature and can thus be contrasted with typical negative emotions such as suffering (Shmotkin, 2005 and Shmotkin et al., 2006). As for the emotional content of the anchor periods, it should be noted that while the emotional content of narratives dwells on the vital role of emotions in memories (Jan-Erick and Vilkko, 1996 and Singer and Salovey, 1993) it also combines emotions of past events or periods with current self-appraisals. Studies have pointed to Holocaust survivors’ difficulties in emotional expressions (Danieli, 1984 and Kav-Venaki et al., 1985). For example, Schnieder, Spiesel, and Malachi (1992) argued that, in general, Holocaust survivors reveal greater restraint in speaking out or sharing their feelings and in Nadler and Ben-Shushan’s (1989) study survivors rated themselves as more emotionally closed than a comparison group. Some authors claimed that these patterns of more restricted emotional expression among survivors may have their costs. Accordingly, Nadler and Ben-Shushan (1989) found that emotional difficulties among Holocaust survivors related to high frequency of psychosomatic complaints, and Yehuda et al. (1997) found a positive correlation between alexithymia (i.e., a difficulty in identifying, experiencing and reporting emotions) and the presence of PTSD. While considering other, non-Holocaust, traumatic events, Esterling, Antoni, Kumar, and Schneiderman (1990) as well as Petrie, Booth, Pennebaker, Davison, and Thomas (1995) found that emotional expressions may assist the coping process among patients diagnosed with severe illnesses. From an opposite point of view, some authors (Danieli, 1980 and Kaminer and Lavie, 1991; Krystal, 1981) suggested that in cases of an extreme traumatic experience such as the Holocaust, isolation and denial (i.e., restriction of emotionality) are effective coping and adaptational mechanisms. Dasberg (1987) combined these two opposed views and claimed that denial may be effective up to a certain point, but as the time passes it becomes less effective and harder to maintain. In contrast to studies which usually consider emotionality in general, we believe that emotional expression of traumatized individuals should be investigated in a more differential framework, which distinguishes between traumatic and non-traumatic periods in life, and interrelates positive emotions (happiness) and negative emotions (suffering) into broader configurational emotionality. Following previous findings (see Shmotkin, 2003, for review), we hypothesized that, on the whole, Holocaust survivors would show lower happiness ratings attributed to their anchor periods in life than comparison groups. Based on the organizing role of anchor periods in life narratives, we also hypothesized that, among Holocaust survivors, those who have higher ratings of happiness attributed to their non-Holocaust anchor periods (i.e., anchor periods which occurred before or after the Holocaust) would show higher levels of present SWB than those with lower ratings of happiness attributed to those periods. Lastly, in view of the need for a broader examination of emotional expression following trauma, and also in line with Shmotkin’s (2005) conceptualization of SWB as acting in face of a “hostile-world scenario” (i.e., one’s image of actual or potential threats to one’s life or integrity), this study explores perceived happiness in juxtaposition with a counterpart perception of suffering. We expected that both happiness and suffering would be necessary to contour emotionality of anchor periods in life as well as to indicate SWB, particularly among traumatized people.