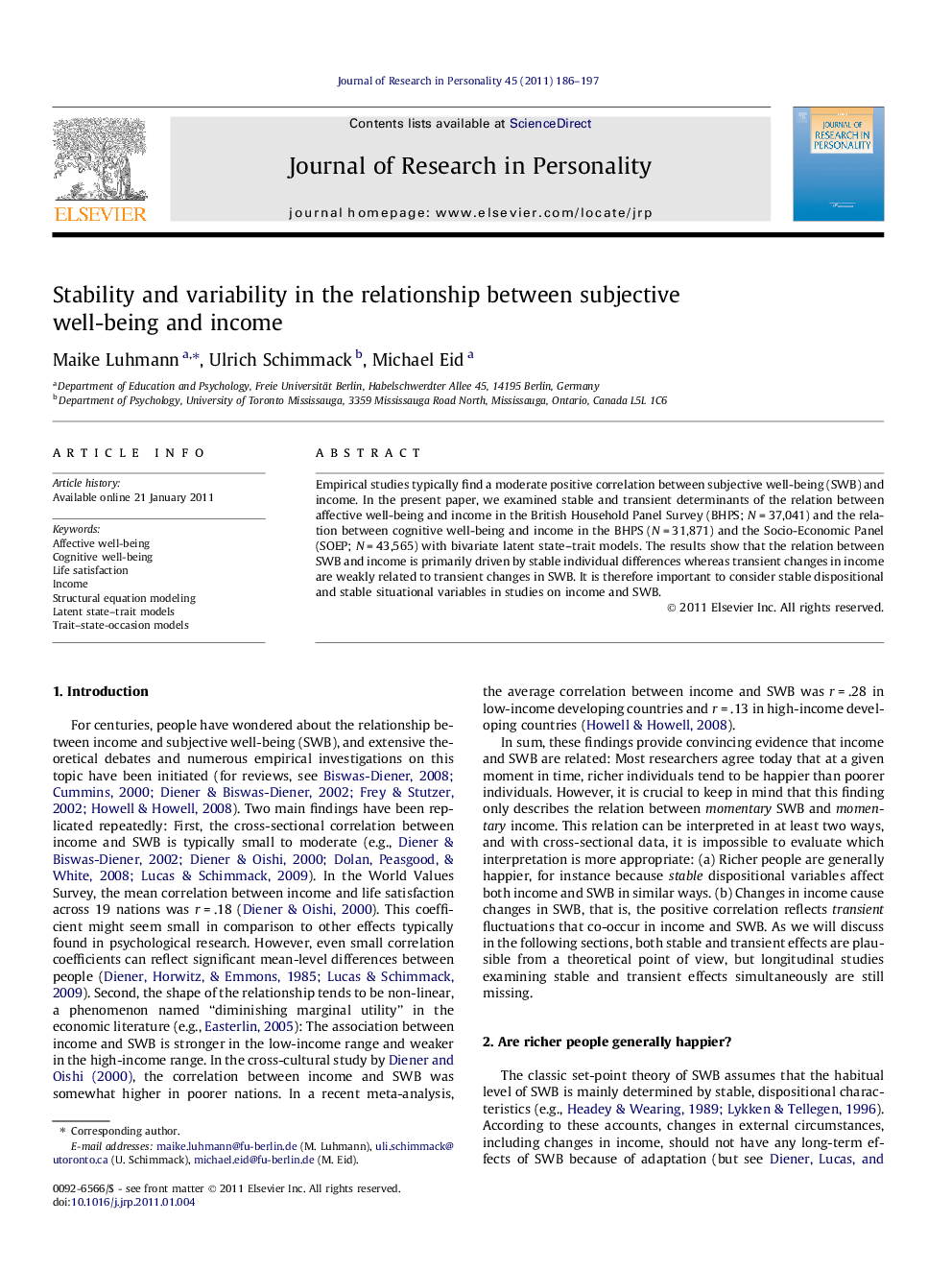 Introduction For centuries, people have wondered about the relationship between income and subjective well-being (SWB), and extensive theoretical debates and numerous empirical investigations on this topic have been initiated (for reviews, see Biswas-Diener, 2008, Cummins, 2000, Diener and Biswas-Diener, 2002, Frey and Stutzer, 2002 and Howell and Howell, 2008). Two main findings have been replicated repeatedly: First, the cross-sectional correlation between income and SWB is typically small to moderate (e.g., Diener and Biswas-Diener, 2002, Diener and Oishi, 2000, Dolan et al., 2008 and Lucas and Schimmack, 2009). In the World Values Survey, the mean correlation between income and life satisfaction across 19 nations was r = .18 ( Diener & Oishi, 2000). This coefficient might seem small in comparison to other effects typically found in psychological research. However, even small correlation coefficients can reflect significant mean-level differences between people ( Diener et al., 1985 and Lucas and Schimmack, 2009). Second, the shape of the relationship tends to be non-linear, a phenomenon named “diminishing marginal utility” in the economic literature (e.g., Easterlin, 2005): The association between income and SWB is stronger in the low-income range and weaker in the high-income range. In the cross-cultural study by Diener and Oishi (2000), the correlation between income and SWB was somewhat higher in poorer nations. In a recent meta-analysis, the average correlation between income and SWB was r = .28 in low-income developing countries and r = .13 in high-income developing countries ( Howell & Howell, 2008). In sum, these findings provide convincing evidence that income and SWB are related: Most researchers agree today that at a given moment in time, richer individuals tend to be happier than poorer individuals. However, it is crucial to keep in mind that this finding only describes the relation between momentary SWB and momentary income. This relation can be interpreted in at least two ways, and with cross-sectional data, it is impossible to evaluate which interpretation is more appropriate: (a) Richer people are generally happier, for instance because stable dispositional variables affect both income and SWB in similar ways. (b) Changes in income cause changes in SWB, that is, the positive correlation reflects transient fluctuations that co-occur in income and SWB. As we will discuss in the following sections, both stable and transient effects are plausible from a theoretical point of view, but longitudinal studies examining stable and transient effects simultaneously are still missing.