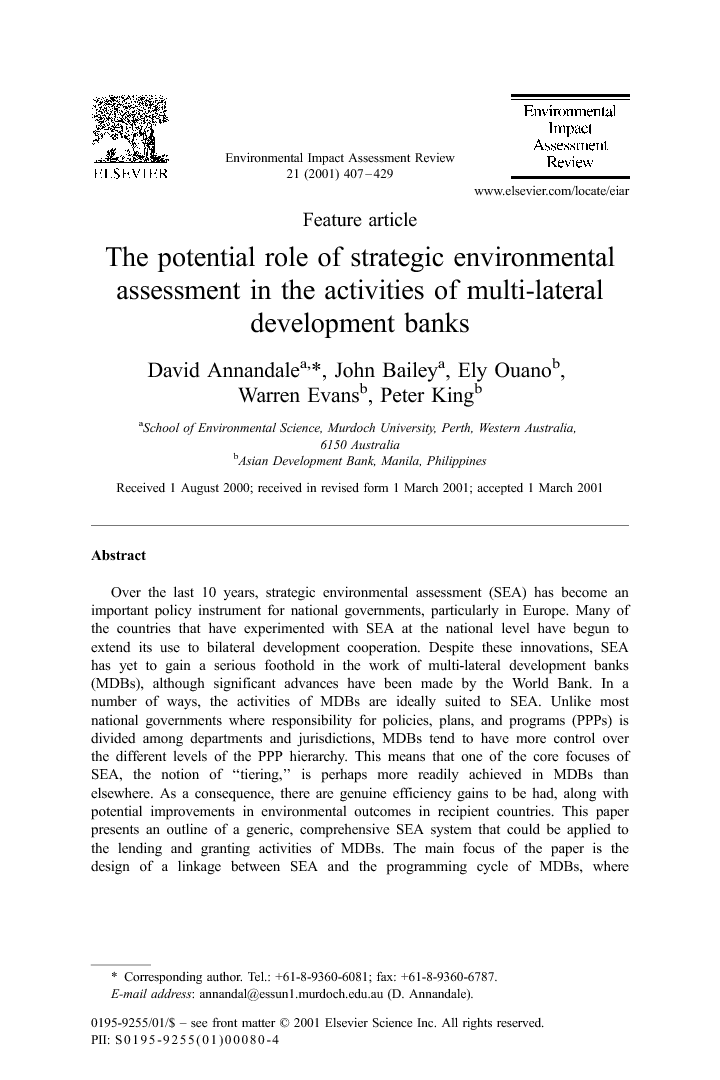 Over the last 10 years, strategic environmental assessment (SEA) has become an important policy instrument for national governments, particularly in Europe. Many of the countries that have experimented with SEA at the national level have begun to extend its use to bilateral development cooperation. Despite these innovations, SEA has yet to gain a serious foothold in the work of multi-lateral development banks (MDBs), although significant advances have been made by the World Bank. In a number of ways, the activities of MDBs are ideally suited to SEA. Unlike most national governments where responsibility for policies, plans, and programs (PPPs) is divided among departments and jurisdictions, MDBs tend to have more control over the different levels of the PPP hierarchy. This means that one of the core focuses of SEA, the notion of “tiering,” is perhaps more readily achieved in MDBs than elsewhere. As a consequence, there are genuine efficiency gains to be had, along with potential improvements in environmental outcomes in recipient countries. This paper presents an outline of a generic, comprehensive SEA system that could be applied to the lending and granting activities of MDBs. The main focus of the paper is the design of a linkage between SEA and the programming cycle of MDBs, where decisions are made about investments in recipient countries.

Environmental impact assessment (EIA) is now well established and accepted at the national level and in development cooperation. Over the 30 years since its modern introduction, EIA has developed a strong institutional basis and a series of well-tested techniques. In recent years, however, it has become obvious that while EIA may be a valuable tool for incorporating environmental issues into the design of individual projects, it is not necessarily able to deal with cumulative impacts, indirect impacts, and large-scale effects. As a consequence, EIA's contribution to sustainable development is relatively limited. At the same time, there has been an obvious trend among bilateral and multi-lateral donor agencies to concentrate more actively on higher-level investments, the idea being that development cooperation might be more effective if it focuses on improving sustainability at the national level, as opposed to a more limited project-driven approach. Some commentators have suggested that, just as the economic focus in multi-lateral financial institutions has begun to move away from individual projects to macroeconomic adjustments through “policy lending,” so there is a need for environmental issues to be dealt with at higher levels (Goodland and Tillman, 1995).1 Higher-level investments have been assessed for economic and social impact for some time. However, environmental assessment at this strategic level is relatively rare and the outcome has arguably been a situation where environmental considerations are not systematically taken into account at the level of national planning. However, this anomaly has finally been recognised and the last 5 years have seen a rapid growth of interest in strategic environmental assessment (SEA). SEA has expanded significantly at the national level, especially in Europe, and it now has formal institutional backing in many countries. Interest in SEA has also been shown by bilateral donors, to the point where many have guidelines and procedures for applying SEA concepts ERM, 1999 and OECD/DAC, 1997. With the exception of the World Bank, which began experimenting with some SEA approaches during the 1990s, the multi-lateral donors2 have not seriously investigated the role that SEA might play in their activities. The main purpose of this paper is to present a way of thinking about how SEA might fit within the administrative procedures of multi-lateral development banks (MDBs). The paper begins by examining the reasons why undertaking SEA might be of benefit to the MDBs, and concentrates on issues such as improving administrative efficiency and addressing problems that project EIA is incapable of dealing with. We believe that proving the case for SEA in MDBs is not a difficult task. Defining what the term actually means, however, is a different matter. Partly because SEA is a new and developing field, there is a lack of standardized terminology. To some commentators, SEA is merely an extension of project EIA. It uses the same procedures and techniques and is applied to policies, plans, and programs (PPPs) after they have been designed. Others see SEA as a process for “trickling down” sustainability ideas, where the focus is on integrating environmental considerations into the making of PPPs, and methods used are more like policy analysis techniques than project EIA. Because of these quite different ways of thinking about SEA, there is a need to develop an MDB-specific definition of the term so that there is a shared understanding of what SEA means for the banks. Section 4 of the paper examines recent experience with SEA in development cooperation. It points to the rapid growth in both practice and institutional backing for SEA over the last 5 years. Much of the impetus for this growth has come from the national level in Europe, but there is evidence of practical experience in Asia and Latin America, supported predominantly by the World Bank. Section 5 of the paper presents a skeleton of a Comprehensive SEA System for MDBs. The point is stressed that SEA for the MDBs should be thought of as an overall administrative process with a series of carefully linked components. It should be noted that the recommendations for SEA presented in this paper are focused on the internal activities of MDBs. The issue of how to implement SEA systems in the developing member countries of the banks is extremely important, but it is not one that is dealt with in detail in this paper. However, some comments are made at the end about how developing member countries could be encouraged to develop their own SEA systems.

This paper has argued that the MDBs should adopt a SEA system that is as close to the “integrated,” “sustainability-led” model as is possible. One of the main outcomes of this suggestion is the idea that SEA should be thought of as an overall “package,” rather than a tack-on to the existing program cycle, and to project EIA. This also means that SEA should be thought of as a program-wide administrative process, rather than as a collection of ex-post evaluation tools or techniques. The main argument for taking this approach is that contemporary practice and literature strongly support the concept that sustainability ideals will only be met when environmental concerns are fully integrated into high level PPPs, before major project decisions are made. The point needs to be stressed, again, that the MDBs are in a good position to implement a SEA process or system in relation to their own activities. The main reason for this assertion is that the banks have close control over all levels in the hierarchy of PPPs. In a bureaucratic sense, this is rare. At the level of countries, this is hardly ever the case. Different levels of government tend to be responsible for different tiers, and so monitoring the “flow” of an issue or concern from the policy level down to an individual project is rarely possible. This paper has focused entirely on the design of a SEA system for internal MDB activities. For SEA to have a positive influence on environmental decision making in developing countries, the concepts introduced in this report will have to be taken up by the countries themselves. In other words, developing member countries will have to be encouraged to develop their own SEA systems. The MDBs can assist in two ways. First, they can implement their own internal SEA systems and present these as examples to developing countries. Second, they could develop a series of Technical Assistance projects to provide direct SEA institutional strengthening assistance to countries.