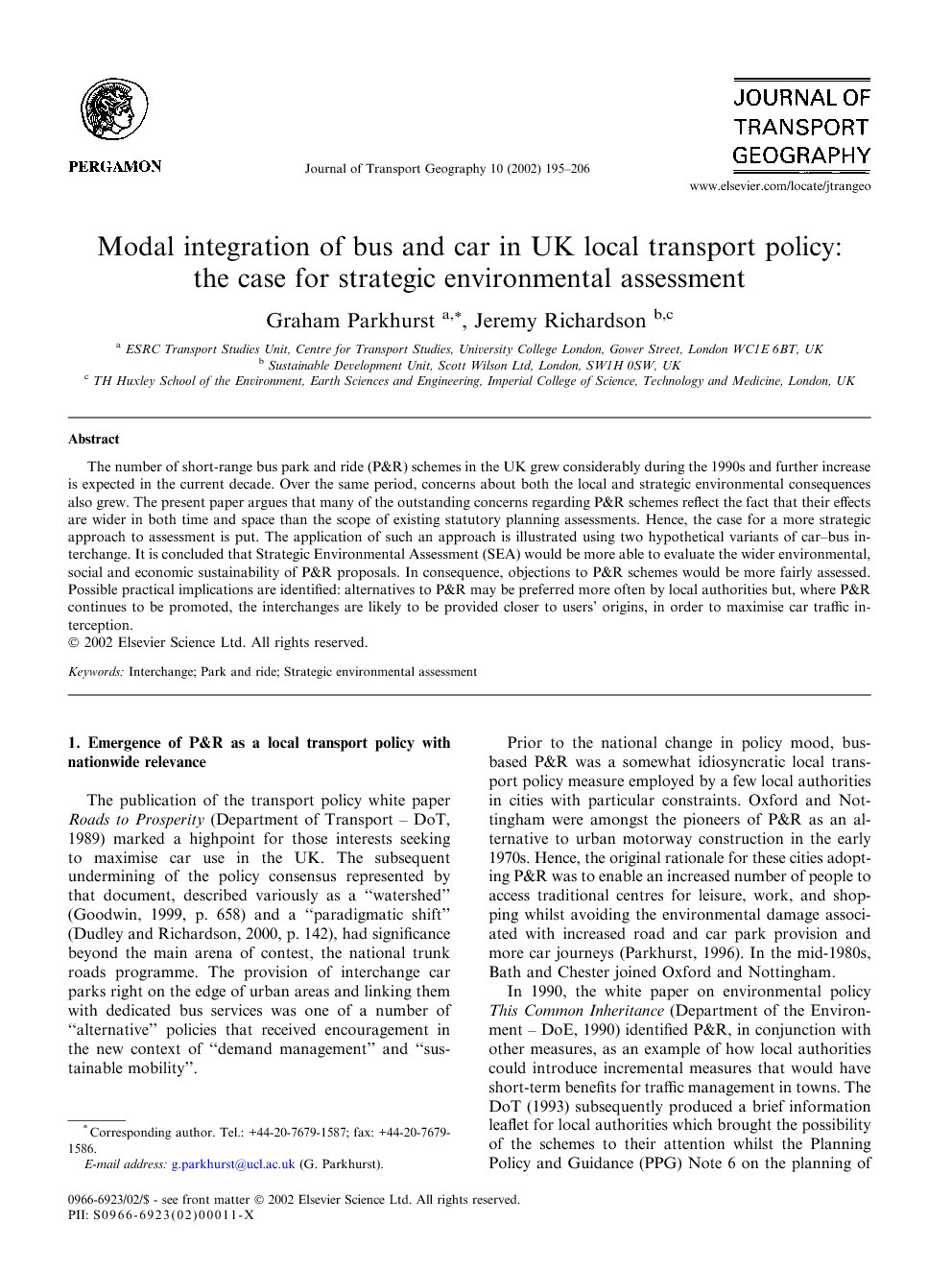 The number of short-range bus park and ride (P&R) schemes in the UK grew considerably during the 1990s and further increase is expected in the current decade. Over the same period, concerns about both the local and strategic environmental consequences also grew. The present paper argues that many of the outstanding concerns regarding P&R schemes reflect the fact that their effects are wider in both time and space than the scope of existing statutory planning assessments. Hence, the case for a more strategic approach to assessment is put. The application of such an approach is illustrated using two hypothetical variants of car–bus interchange. It is concluded that Strategic Environmental Assessment (SEA) would be more able to evaluate the wider environmental, social and economic sustainability of P&R proposals. In consequence, objections to P&R schemes would be more fairly assessed. Possible practical implications are identified: alternatives to P&R may be preferred more often by local authorities but, where P&R continues to be promoted, the interchanges are likely to be provided closer to users' origins, in order to maximise car traffic interception.

The publication of the transport policy white paper Roads to Prosperity (Department of Transport – DoT, 1989) marked a highpoint for those interests seeking to maximise car use in the UK. The subsequent undermining of the policy consensus represented by that document, described variously as a “watershed” (Goodwin, 1999, p. 658) and a “paradigmatic shift” (Dudley and Richardson, 2000, p. 142), had significance beyond the main arena of contest, the national trunk roads programme. The provision of interchange car parks right on the edge of urban areas and linking them with dedicated bus services was one of a number of “alternative” policies that received encouragement in the new context of “demand management” and “sustainable mobility”. Prior to the national change in policy mood, bus-based P&R was a somewhat idiosyncratic local transport policy measure employed by a few local authorities in cities with particular constraints. Oxford and Nottingham were amongst the pioneers of P&R as an alternative to urban motorway construction in the early 1970s. Hence, the original rationale for these cities adopting P&R was to enable an increased number of people to access traditional centres for leisure, work, and shopping whilst avoiding the environmental damage associated with increased road and car park provision and more car journeys (Parkhurst, 1996). In the mid-1980s, Bath and Chester joined Oxford and Nottingham. In 1990, the white paper on environmental policy This Common Inheritance (Department of the Environment – DoE, 1990) identified P&R, in conjunction with other measures, as an example of how local authorities could introduce incremental measures that would have short-term benefits for traffic management in towns. The DoT (1993) subsequently produced a brief information leaflet for local authorities which brought the possibility of the schemes to their attention whilst the Planning Policy and Guidance (PPG) Note 6 on the planning of retail development by English local authorities mentioned P&R as a possible component of effective urban traffic management (DoE, 1993). Financial support from central government for P&R was also increased at this time, by making the schemes eligible for bus priority funding and Transport Supplementary Grant (Huntley, 1993). From 1993, local authorities were also able to apply to central government under the Transport Policies and Programme (TPP) grant mechanism for the funding of “packages” of local transport schemes, further increasing the possibilities of obtaining funds to promote interchange between modes, provided P&R was presented as one of a group of related policy measures, usually to be focussed on increasing the attractiveness of alternatives to car use (Glaister et al., 1998). Having recognised P&R as a policy option for local authorities in general, and having increased the potential for national fiscal support, government began to promote particular policy aims. The 1994 edition of PPG13 advice to English local authorities on transport planning called for better integration with land-use planning in order to reduce car dependence. The role of bus-based P&R as a means of urban congestion relief and enhancing the accessibility of town centres was recognised (DoE/DoT, 1994). In the same year the Royal Commission on Environmental Pollution (RCEP, 1994, p. 186) concluded in its report on transport that “…carefully designed park and ride schemes…should form a significant element in local transport strategies”. Correlated with this official recognition of the policy as having nationwide potential was more widespread adoption by local authorities: Bristol, Cambridge, Canterbury, Exeter, Guildford, Maidstone, Norwich, Preston, Winchester and York had all arranged services by 1994 (Huntley, 1993; English Historic Towns Forum – EHTF, 2000). The policy remains, though, mainly “English”, with the exception of a few schemes in Scotland. By 1997, government support for P&R had moved from recognition to active encouragement. The revised PPG6 described P&R as an alternative to town centre parking provision that traffic management strategies “should include” (DoE, 1996, Annex E). The following year, in the context of a revised National Road Traffic Forecast predicting the potential for road traffic growth of up to 84% by 2031 (Department of the Environment, Transport and the Regions – DETR, 1997), another white paper on transport policy A New Deal for Transport – Better for Everyone confirmed that P&R would be encouraged for town centres in order “to help beat congestion” (DETR, 1998a, p. 46) and appealed to local authorities to consider the provision of interchange facilities when preparing Local Plans. In 2000, the DETR published its strategy document for the next decade: Transport 2010 – The 10 Year Plan (TYPT). The plan noted that around 70 urban P&R schemes were already in operation and argued that “…they can offer an effective way of reducing congestion and pollution in busy urban centres…” (DETR, 2000a, p. 60). Hence there is an aspiration that P&R will contribute to the achievement of the Air Quality Strategy (DETR, 2000b) in urban areas, which entails statutory limits on pollution levels to be met by 2005. Indeed, the TYPT foresaw considerable expansion of P&R, estimating that “up to 100 new park and ride schemes” would result from the proposed investment in local transport facilities (DETR, 2000a, p. 65). Most recently, government policy has shown less certitude with respect to P&R. The revised PPG13 (DETR, 2001) confirmed a further national aim for P&R – the promotion of sustainable travel patterns joined the established task of enhancing accessibility – whilst at the same time issuing a number of caveats about how the policy should be implemented. In effect, these caveats are an acknowledgment that some P&R policies are in fact countering the move towards sustainability. To summarise, the policy of bus-based P&R has developed over 25 years from being seen as relevant only in unusual circumstances to being adopted on a widespread basis and with further expansion being promoted, albeit with some recent reservations apparent in advice from central government. Over the 25 years, the aims set for P&R schemes have also widened from the original intention of avoiding the need to construct road and parking infrastructure within urban areas. They now include: encouraging modal shift from car to public transport through better integration; supporting the economic vitality of “traditional centres”; and reducing traffic congestion, climate change gas emissions and air pollution.

The growth in P&R services in the UK, mainly in England, and the unresolved debates and concerns about the environmental and transport-market effects of P&R schemes that have coevolved with that growth have been reviewed, with the finding that there is a need for a more strategic approach to the evaluation of P&R schemes, as developments with negative environmental consequences may be permitted by the planning system if excessive emphasis is placed on the appraisal of P&R schemes as if the effects were local and solely urban. In particular, SEA is necessary in order: • to examine a proposal early enough so that it can be considered along with alternative options which are based upon meeting the same transport objectives rather than alternative locations for the same proposal; • to give adequate spatial scale to the appraisal, including effects in the rural hinterland and the global environment; and • to introduce a temporal dimension, notably consideration of the potential effects of additional sites and related planning development pressures. This paper has demonstrated that a more strategic form of environmental assessment, which critically evaluates P&R schemes and possible alternatives earlier in the conception-to-construction process, and seeks to address the strategic problems and objectives of a transport strategy or plan, can provide important additional information to both the public and the decision-maker. In practical terms, such a more transparent and encompassing procedure could arguably have achieved greater consensus about controversial P&R expansion policies in Oxford and Chester, which had to be resolved at public inquiries not ideally suited to addressing objections of a strategic nature. However, one possible outcome of using a more strategic appraisal tool is that interchange strategies may not be selected at all as the most effective approach. Where they do continue to be supported, then a demonstrative application of a strategic appraisal technique to two theoretical approaches to car-bus interchange provision suggests that current P&R practice would be subject to much less favourable evaluations if considered in the wider spatial, temporal, and policy contexts. Instead, applying SEA would seem to favour the placement of interchanges relatively far from the urban area, in order to intercept motorists early in their journeys, and linking them to the urban area with non-dedicated public transport services, i.e., services realistically accessible by a range of modes.