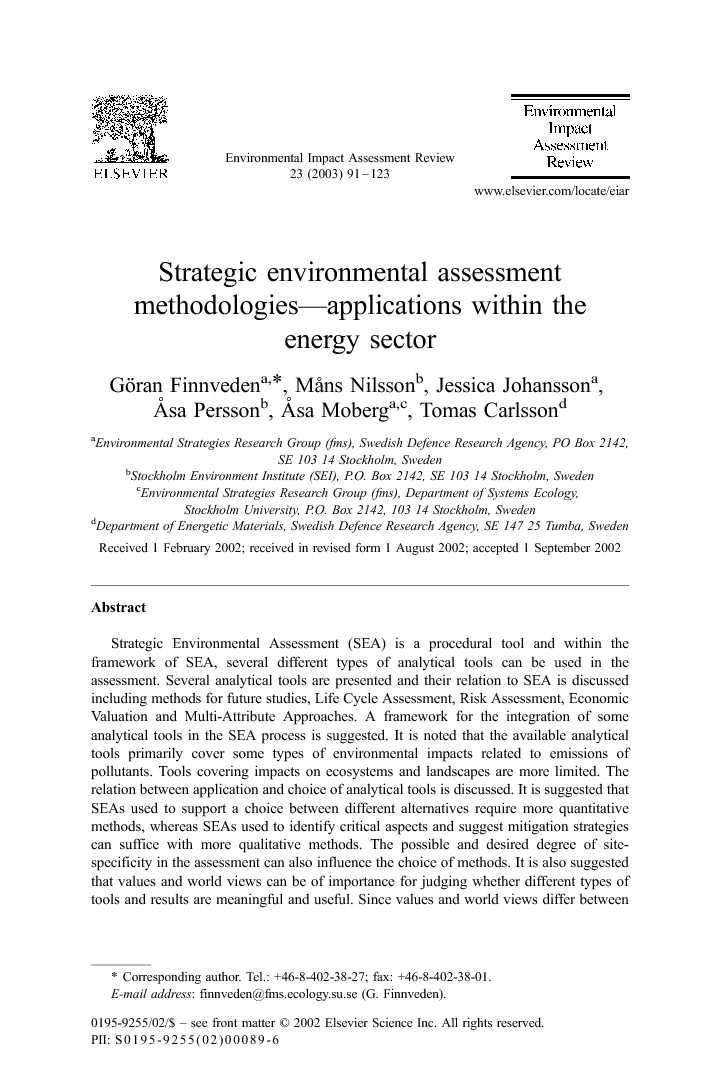 Strategic Environmental Assessment (SEA) is a procedural tool and within the framework of SEA, several different types of analytical tools can be used in the assessment. Several analytical tools are presented and their relation to SEA is discussed including methods for future studies, Life Cycle Assessment, Risk Assessment, Economic Valuation and Multi-Attribute Approaches. A framework for the integration of some analytical tools in the SEA process is suggested. It is noted that the available analytical tools primarily cover some types of environmental impacts related to emissions of pollutants. Tools covering impacts on ecosystems and landscapes are more limited. The relation between application and choice of analytical tools is discussed. It is suggested that SEAs used to support a choice between different alternatives require more quantitative methods, whereas SEAs used to identify critical aspects and suggest mitigation strategies can suffice with more qualitative methods. The possible and desired degree of site-specificity in the assessment can also influence the choice of methods. It is also suggested that values and world views can be of importance for judging whether different types of tools and results are meaningful and useful. Since values and world views differ between different stakeholders, consultation and understanding are important to ensure credibility and relevance.

The aim of this article is to analyse how various analytical tools can facilitate and enhance the SEA process, particularly in relation to energy sector SEA. It is found that several existing tools can contribute, either by focusing mainly on the identification and modelling of environmental change (e.g. LCA, RA, future studies) or by focusing mainly on the valuation stage (e.g. MAA methods, economic valuation methods, surveys). Based on the tools examined here, it appears that finding useful tools for analysing ecosystem and landscape impacts is more challenging than tools for analysing emissions of pollutants, at least in the energy sector context. Based on the examination of the selected analytical tools according to a set of analytical features, an integrative framework of methods for SEA is proposed (see Fig. 2 and Fig. 3). Three conclusions can be drawn from this exercise. First, the key factors influencing the choice of analytical tools are the definition of system boundaries, the amount and types of environmental changes included in the assessment, the degree of site-specificity desired, the degree of quantification desired, the degree of aggregation of results desired, and the preference of information type according to the DPSIR-model. Second, and in addition to these factors, the preferred function of the SEA also influences the choice. It is argued that to support a choice between two or more alternatives quantitative results may be needed, while a SEA with the purpose to identify critical aspects of alternative(s) and suggest mitigation strategies might do with qualitative results. Lastly, it was suggested that underlying the choices that shape the use of methods in a SEA is the world view and assumptions of the assessor, i.e. considered relevant information. The next step will be to test the framework of analytical tools in a SEA on a Swedish energy sector PPP.