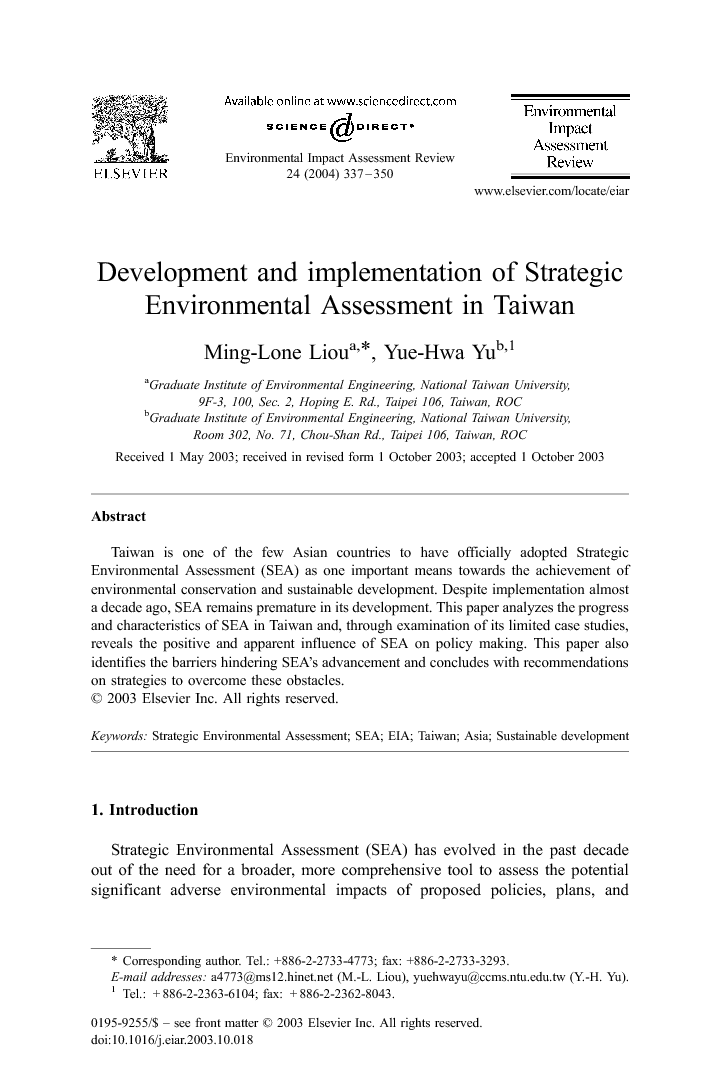 Taiwan is one of the few Asian countries to have officially adopted Strategic Environmental Assessment (SEA) as one important means towards the achievement of environmental conservation and sustainable development. Despite implementation almost a decade ago, SEA remains premature in its development. This paper analyzes the progress and characteristics of SEA in Taiwan and, through examination of its limited case studies, reveals the positive and apparent influence of SEA on policy making. This paper also identifies the barriers hindering SEA's advancement and concludes with recommendations on strategies to overcome these obstacles.

Strategic Environmental Assessment (SEA) has evolved in the past decade out of the need for a broader, more comprehensive tool to assess the potential significant adverse environmental impacts of proposed policies, plans, and programs (PPPs) early in the decision-making process Dalal-Clayton and Sadler, 1999, Noble, 2000, Partidário, 1996, Sadler and Verheem, 1996 and von Seht, 1999. SEA is a formalized, systematic process that integrates environmental considerations into decision making and aims to achieve sustainable development Partidário and Moura, 2000, Thérivel et al., 1992 and Thérivel and Partidário, 1996. When compared with Environmental Impact Assessment (EIA), SEA tends to be more proactive, accounts for the cumulative effects of environmental problems, and initiates and considers all plausible environmentally sound alternatives Noble, 2000 and Partidário and Clark, 2000. It was also argued that the adaptability and flexibility inherent in SEA is crucial to successful application in different cultural and decision-making environments around the world Fischer, 2003, Thérivel and Partidário, 1996, Partidário, 1996 and Verheem and Tonk, 2000. Taiwan began preliminary application of EIA on major public works in 1980. Over 200 projects were implemented with EIA prior to the EIA Act of 1994, the first official piece of legislation to mention SEA. As of the end of September 2003, Taiwan has applied SEA to three cases, and another case is currently under the public consultation process, yet, all differ with respect to their strategic level, scope, and assessment methods/techniques. Via description of the current status of SEA in Taiwan as well as examination and performance evaluation of its three case studies, this paper illustrates the basic functions and benefits of SEA as applied in the Taiwan context. It also highlights the unique characteristics of Taiwan's SEA system and provides a comparison with international SEA trends. The concluding sections identify barriers to the full implementation of SEA and recommend ways of overcoming obstacles to the development of a more comprehensive SEA system in Taiwan.

Even though SEA studies have increasingly become quite common in developed countries, few SEA studies have been conducted in the developing world or newly industrialized countries to date. The few cases that are from developing countries can be found from China (Xiuzhen et al., 2002), Hong Kong, Singapore, Malaysia, the Philippines, Sri Lanka, and Vietnam (Briffett et al., 2003). Taiwan is one of the few Asian countries to have officially adopted SEA. As if synchronized with the international trend, SEA was formally incorporated as a legal requirement in Taiwan with the EIA Act of 1994, yet remains in a premature development stage with limited application. The major barriers to comprehensive implementation in Taiwan are very much the same barriers hindering broad adoption by the international community, namely insufficient political will, limited societal support base, and bureaucratic prerogatives (Sadler, 1996). Full adoption and implementation of SEA in Taiwan's policy-making system will require greater support from a wide range of stakeholders and achieving the general consensus that SEA does add value to the decision-making process and promotes sustainable development. In order to expand the application of SEA, we therefore recommend the following activities: (1) organize training programs to educate and familiarize decision makers and SEA administrators about the benefits of SEA and its processes; (2) prepare case studies for training purposes; and (3) compare and review Taiwan's system with both similar and dissimilar SEA systems from other countries to learn from the experience of the global community. Due to its unique political environment, Taiwan may be a country often overlooked by the international community, yet, as stated in its Agenda 21(NCSD, 2000), it is fully willing to accept SEA as an essential component of its policy-making system as one crucial step towards achieving sustainable development.