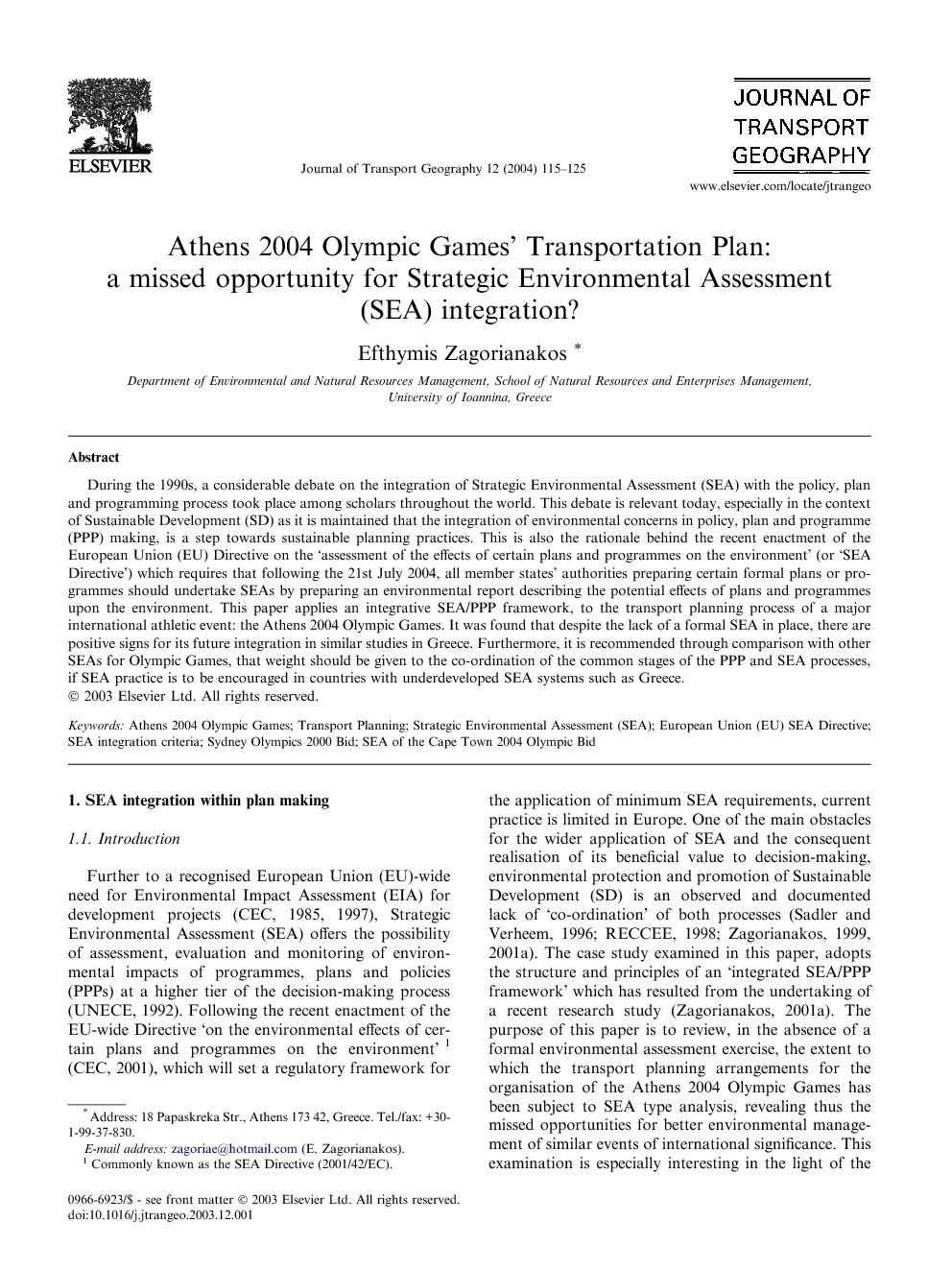 During the 1990s, a considerable debate on the integration of Strategic Environmental Assessment (SEA) with the policy, plan and programming process took place among scholars throughout the world. This debate is relevant today, especially in the context of Sustainable Development (SD) as it is maintained that the integration of environmental concerns in policy, plan and programme (PPP) making, is a step towards sustainable planning practices. This is also the rationale behind the recent enactment of the European Union (EU) Directive on the `assessment of the effects of certain plans and programmes on the environment' (or `SEA Directive') which requires that following the 21st July 2004, all member states' authorities preparing certain formal plans or programmes should undertake SEAs by preparing an environmental report describing the potential effects of plans and programmes upon the environment. This paper applies an integrative SEA/PPP framework, to the transport planning process of a major international athletic event: the Athens 2004 Olympic Games. It was found that despite the lack of a formal SEA in place, there are positive signs for its future integration in similar studies in Greece. Furthermore, it is recommended through comparison with other SEAs for Olympic Games, that weight should be given to the co-ordination of the common stages of the PPP and SEA processes, if SEA practice is to be encouraged in countries with underdeveloped SEA systems such as Greece.

1.1. Introduction Further to a recognised European Union (EU)-wide need for Environmental Impact Assessment (EIA) for development projects (CEC, 1985 and CEC, 1997), Strategic Environmental Assessment (SEA) offers the possibility of assessment, evaluation and monitoring of environmental impacts of programmes, plans and policies (PPPs) at a higher tier of the decision-making process (UNECE, 1992). Following the recent enactment of the EU-wide Directive `on the environmental effects of certain plans and programmes on the environment'1 (CEC, 2001), which will set a regulatory framework for the application of minimum SEA requirements, current practice is limited in Europe. One of the main obstacles for the wider application of SEA and the consequent realisation of its beneficial value to decision-making, environmental protection and promotion of Sustainable Development (SD) is an observed and documented lack of `co-ordination' of both processes (Sadler and Verheem, 1996; RECCEE, 1998; Zagorianakos, 1999 and Zagorianakos, 2001a). The case study examined in this paper, adopts the structure and principles of an `integrated SEA/PPP framework' which has resulted from the undertaking of a recent research study (Zagorianakos, 2001a). The purpose of this paper is to review, in the absence of a formal environmental assessment exercise, the extent to which the transport planning arrangements for the organisation of the Athens 2004 Olympic Games has been subject to SEA type analysis, revealing thus the missed opportunities for better environmental management of similar events of international significance. This examination is especially interesting in the light of the SEA-Directive's enactment, in as far as it offers an indication of the difficulties a formal (i.e. under the Directive's requirements) undertaking of SEA would have posed to the Greek institutional environmental management mechanisms. This paper is also supplemented by the comparison of the case study characteristics with SEAs and transport studies carried out for other (candidate) Olympic cities such as Cape Town2 and Sydney. The first part of the paper provides an insight to the appropriateness of applying SEA to the Transportation Plan. The presentation of the main conclusions of the analysis of the case study follows. The paper concludes by discussing the reasons for the SEA deficiency and highlights the incentives and recommendations for promoting better practice on SEA integration in Greece. 1.2. Is Athens 2004 Transportation Plan suitable for SEA? The hypothetical application of SEA to the Athens 2004 Olympic Games, which is the subject of this paper, is justified by the limited international experience of this type of assessment for major athletic events. The following question needs to be addressed, however, before elaborating on this case study: is Athens 2004 Transportation Plan suitable for SEA? After all, one would have thought that the Olympics Transportation Plan is still a `project' albeit a major one rather that a plan. In other words, is the Athens 2004 Transportation Plan sufficiently far up the scale to warrant consideration under SEA? Under a rather narrow definitional viewpoint, the Athens 2004 Transportation Plan has the characteristics of a programme as it includes `the consideration of more than a single project' (CEC, 1996) and in that respect certainly qualifies for SEA examination. In addition, the Plan would also warrant consideration under SEA Directive's provisions since according to the scope of the SEA-Directive [CEC, 2001, Article 3 (scope) para. 2; Article 2 (definitions)]: `An environmental assessment shall be carried out for all plans and programs, (a) which are prepared for … transport … and which set the framework for future development consent of projects listed in Annexes I and II to Directive 85/337/EEC' and `For the purposes of this Directive “plans and programs” shall mean plans and programs: which are subject to preparation and/or adoption by an authority at national, regional or local level … and which are required by legislative, regulatory or administrative provisions'. The SEA Directive has only recently been enacted but not yet transposed into member states' legal system. It is for this reason that a potential voluntary SEA application to the Olympics plans and programmes, prior to the Directive's adoption, would have provided valuable insights to its future successful implementation in Greece.