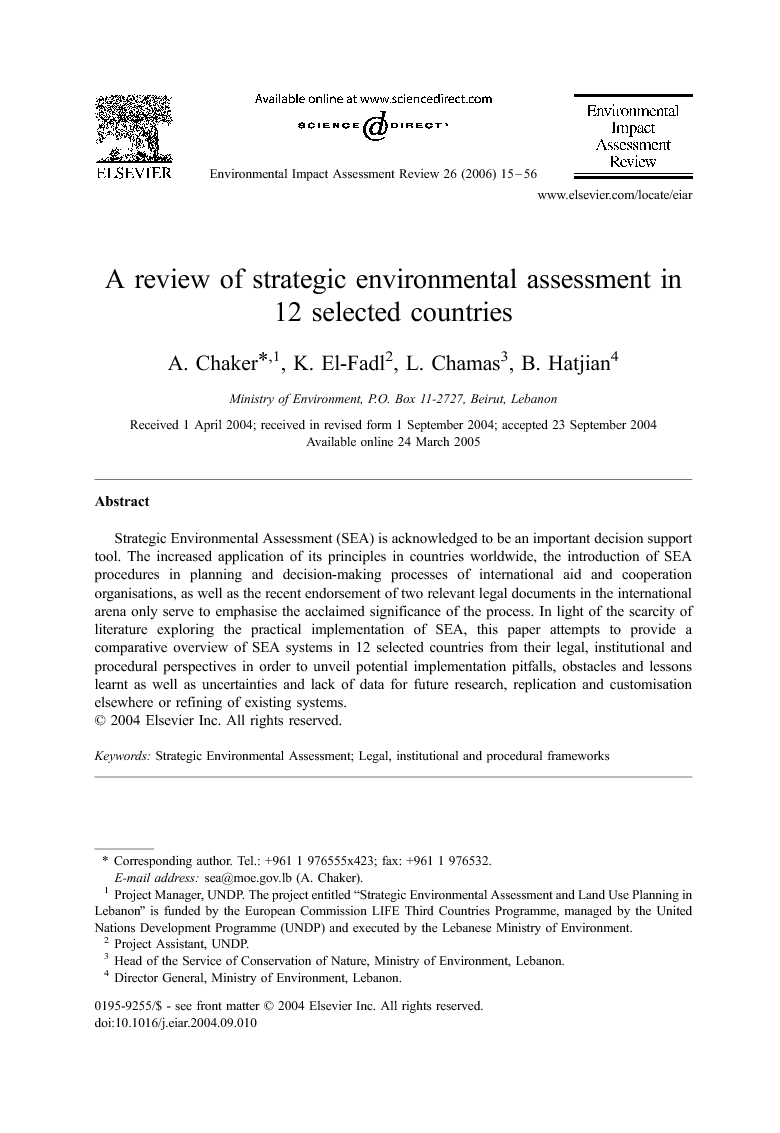 Strategic Environmental Assessment (SEA) is acknowledged to be an important decision support tool. The increased application of its principles in countries worldwide, the introduction of SEA procedures in planning and decision-making processes of international aid and cooperation organisations, as well as the recent endorsement of two relevant legal documents in the international arena only serve to emphasise the acclaimed significance of the process. In light of the scarcity of literature exploring the practical implementation of SEA, this paper attempts to provide a comparative overview of SEA systems in 12 selected countries from their legal, institutional and procedural perspectives in order to unveil potential implementation pitfalls, obstacles and lessons learnt as well as uncertainties and lack of data for future research, replication and customisation elsewhere or refining of existing systems.

The development and consequent adoption of Strategic Environmental Assessment (SEA) procedures have gained momentum in recent years. Not only have more countries revised their approaches vis-à-vis the integration of environmental assessment at different tiers of the decision-making process, but the international arena has also played a vital role in re-emphasising the importance of SEA through the endorsement of two important legal documents, namely, the European SEA Directive (2001/42/EC) and the United Nations Economic Commission for Europe (UNECE) 2003 SEA Protocol. Moreover, international financing institutions and cooperation organisations are introducing more and more their own SEA procedures and requiring beneficiary countries to adopt and potentially mainstream these procedures into their planning and decision-making processes. A quick overview of the SEA concept and its different application models,5 as well as milestone international initiatives are briefly described prior to the comparative evaluation of SEA experience in 12 selected countries, which aims to unveiling potential implementation pitfalls, obstacles and lessons learnt, as well as uncertainties and lack of data for future research, replication and customisation elsewhere or refining of existing systems.