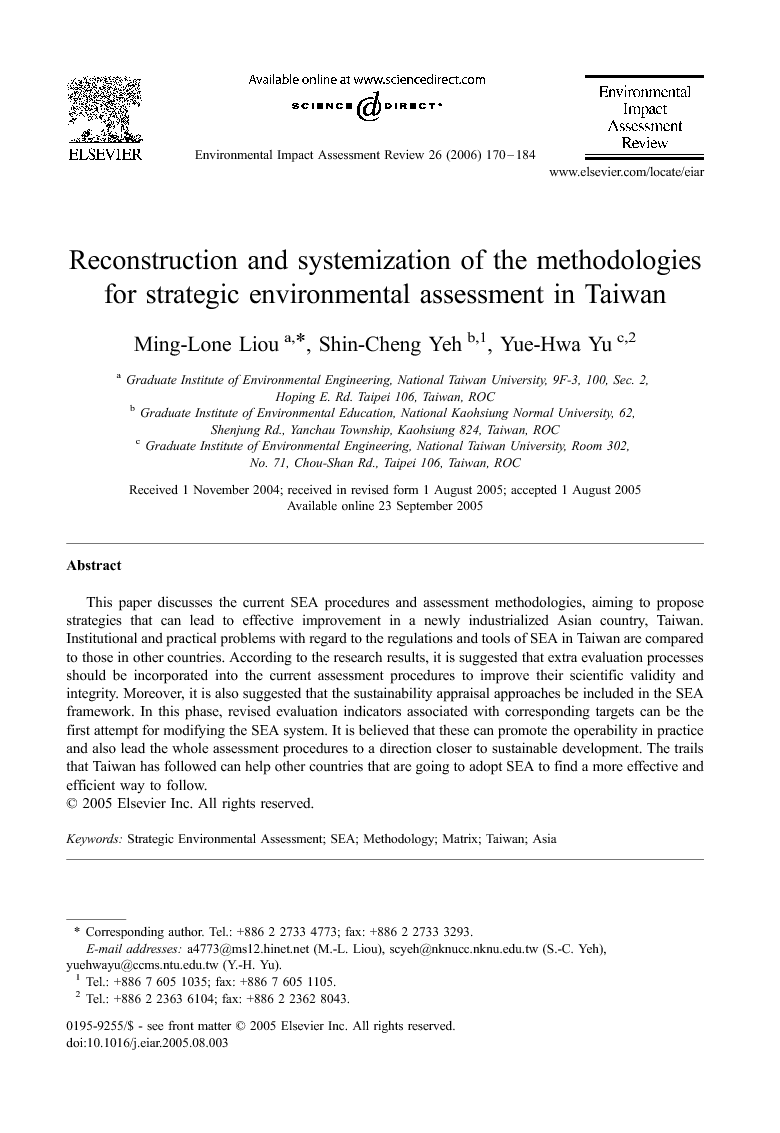 This paper discusses the current SEA procedures and assessment methodologies, aiming to propose strategies that can lead to effective improvement in a newly industrialized Asian country, Taiwan. Institutional and practical problems with regard to the regulations and tools of SEA in Taiwan are compared to those in other countries. According to the research results, it is suggested that extra evaluation processes should be incorporated into the current assessment procedures to improve their scientific validity and integrity. Moreover, it is also suggested that the sustainability appraisal approaches be included in the SEA framework. In this phase, revised evaluation indicators associated with corresponding targets can be the first attempt for modifying the SEA system. It is believed that these can promote the operability in practice and also lead the whole assessment procedures to a direction closer to sustainable development. The trails that Taiwan has followed can help other countries that are going to adopt SEA to find a more effective and efficient way to follow.

Strategic Environmental Assessment (SEA) is the systematic and comprehensive decision-aiding tool for deciding the government's strategic actions and corresponding alternatives. It was anticipated that through its implementation, environmental impacts of proposed policies, plans, and programs (PPPs) can be identified and emphasized in as-early stage in the decision-making process (Marsden, 2002, Partidário, 1999, Sadler and Verheem, 1996, Thérivel and Partidário, 1996 and Thérivel et al., 1992). Although differences in the terms, forms, and assessment procedures for SEA implementations exist among nations, the core objective remains the same, i.e., to integrate environmental considerations into decision-making processes and to achieve sustainable development (Dalal-Clayton and Sadler, 2004, Fischer and Seaton, 2002, Partidário, 1996, Partidário, 2002, Sadler, 1996 and Verheem and Tonk, 2000). Taiwan is a small island located in the west Pacific region with a population more than 23 million and an area of 36,000 km2. It is one of the most important economies in Asia, with a per capita GDP of US$13,156 and an economic growth rate of 3.23% in 2003. Taiwan has gained its economic growth at a price of environmental degradation since the 1960s. Water, air, and solid waste pollution problems were brought about by intensive industrialization and urban expansion without taking much environmental concerns into account. Thus, it is not surprising that as Taiwan's current competitiveness got an excellent rank of the 21st according to the report of World Economic Forum (WEF et al., 2002), the environmental sustainability index score of Taiwan was ranked lower than the 100th in the international community in 2002 (Yeh et al., 2002). Taiwan adopted the first official piece of legislation regarding SEA in 1994, which was earlier than most Asian countries (Briffett et al., 2003, Liou and Yu, 2004 and Xiuzhen et al., 2002). However, as of the middle of 2004, Taiwan has only applied SEA to four cases, with more than half of the 11 designated plan/program categories required to conduct mandatory SEA still lack any assessment activities (EPA Taiwan, 2004). This disappointing result reflects the limited experience with incorporating environmental concerns and sustainability principles in Taiwan. The possible reasons for this relatively poor implementation may include resistance due to egoism of the administrative sector, rapid change of the unstable political climate, and unfamiliarity with SEA procedures and methodologies (Environmental Protection Administration (EPA) Taiwan, 2002 and Liou et al., 2003). Thus, this paper examined in detail the SEA procedures and assessment methodologies applied in Taiwan, with the hope that through literature reviews and comparative studies of international SEA systems, effective strategies aimed at practicality improvement and theory enhancement of SEA methodologies can be proposed, which can further enhance the promotion of SEA in Taiwan. It is also anticipated that the experiences of SEA implementations and the efforts to reconstruct/systemize the SEA methodologies in Taiwan can be referential to other countries with similar situations.

In this paper, the current situation and major challenge of Taiwan's SEA system is reviewed and discussed, with the methodologies and assessment procedures for conducting SEA emphasized. In terms of initiation, timing and development of SEA system, Taiwan's progress is comparable to the developed countries' and in line with international trend; however, Taiwan lags behind on the actual implementation because of some institutional and practical constraints and would require more government efforts in order to promote its implementation. This paper proposed to improve the existing tools used in the current SEA system instead of advocating the system change, as the authors believe that the growth of SEA is part of the evolution of the society in general, and that unless the current system has been thoroughly reviewed and implemented, a leap-frog type of conversion is unlikely to occur. As proposed in this paper, the IAAP, the improved assessment techniques and methodologies, and the enhanced impact matrix, can all be used as assessment tools by the competent authorities in Taiwan. Table 5 summarizes those problems, suggestions, and the reasons why these suggestions were made in this paper for a clear review. The basic concept and objective of the current international SEA practice is to incorporate the consideration of sustainability into SEA. The current SEA system in Taiwan does consider impacts which cover the essential aspects of traditional EIA. However, from the viewpoint of SEA, the fundamental dimensions of sustainability in the environmental, economic, social, and institutional aspects were not incorporated into the framework systematically. To promote the integrity and completeness of the SEA system in Taiwan, classification of potential impacts, as well as the evaluation framework, which includes hierarchy of indicators, need to be modified. Thus, the redesigned matrix tables proposed in this paper should allow SEA to be conducted in a manner more consistent with the goals of national sustainable development in Taiwan. However, the task of incorporating sustainability assessment into result interpretation in future SEA process, in order to develop the next generation SEA in Taiwan, is certain to be a daunting task and would require great devotion and efforts of all SEA practitioners in Taiwan. For countries working on the legislation and application of SEA, two important lessons of interest may be learned from the experiences of SEA implementations in Taiwan. Firstly, although the same basic SEA principles apply to different countries, local implementation of SEA needs to be fit into the actual political systems in accordance with the unique socioeconomic and cultural characteristics of each country. Secondly, the status of development of a country is also an important consideration in devising individual SEA scheme. The SEA implementation can be successful only with the SEA legislation in place which is backed by systematic and useable SEA procedures designed based on comprehensive and practical methodologies. This situation tends to exist when a country is highly developed in environmental, social and economic aspects. The SEA development approach which Taiwan has adopted may help other countries that are going to adopt SEA in finding a more effective and efficient approach to introduce SEA, which hopefully can contribute to bringing the Earth closer to the status of sustainable development.