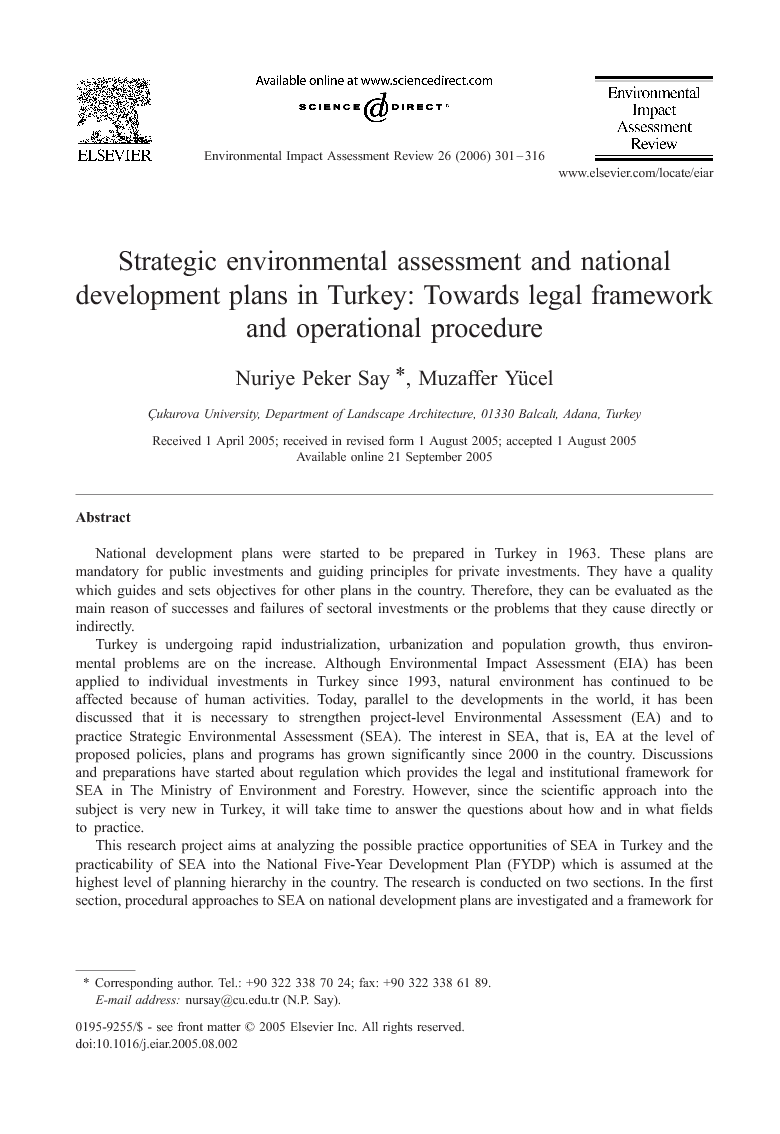 National development plans were started to be prepared in Turkey in 1963. These plans are mandatory for public investments and guiding principles for private investments. They have a quality which guides and sets objectives for other plans in the country. Therefore, they can be evaluated as the main reason of successes and failures of sectoral investments or the problems that they cause directly or indirectly. Turkey is undergoing rapid industrialization, urbanization and population growth, thus environmental problems are on the increase. Although Environmental Impact Assessment (EIA) has been applied to individual investments in Turkey since 1993, natural environment has continued to be affected because of human activities. Today, parallel to the developments in the world, it has been discussed that it is necessary to strengthen project-level Environmental Assessment (EA) and to practice Strategic Environmental Assessment (SEA). The interest in SEA, that is, EA at the level of proposed policies, plans and programs has grown significantly since 2000 in the country. Discussions and preparations have started about regulation which provides the legal and institutional framework for SEA in The Ministry of Environment and Forestry. However, since the scientific approach into the subject is very new in Turkey, it will take time to answer the questions about how and in what fields to practice. This research project aims at analyzing the possible practice opportunities of SEA in Turkey and the practicability of SEA into the National Five-Year Development Plan (FYDP) which is assumed at the highest level of planning hierarchy in the country. The research is conducted on two sections. In the first section, procedural approaches to SEA on national development plans are investigated and a framework for these approaches is adapted at the institutional level. In the second section, SEA form for energy sector in the development plans is developed. In this article, the findings related to the first part of the project are given.

Strategic Environmental Assessment (SEA) can be defined as a systematic process in which environmental, economic and social consequences of proposed policies, plans and programs are evaluated at the earliest appropriate stage of decision-making (Lee and Walsh, 1992, Wood and Djeddour, 1992, Therivel et al., 1992, Buckley, 1994, Sadler and Verheem, 1996, Partidario, 1996, Partidario and Clark, 2000 and Fischer, 2002). SEA, as an approach to achieve sustainable development, undertake to integrate environmental considerations into decision-making processes in relation with governmental policies. SEA practices have mostly been observed in the developed countries, however, the practice of this subject is more important for the developing countries aiming sustainable development (Barrow, 1998, Say, 2000, World Bank, 1999, Abaza, 2000, Wood, 2003, Abaza et al., 2004 and Dalal-Clayton and Sadler, 2005a). In these countries, the development process till now has been followed with an approach which aims economic income in the short term. The evolving problems have been tried to be solved by policies which intend to decrease current pollution. The international relationships, organizations, external financial sources for investments, non-governmental organizations and the public impact have been effective in order to form “preventive policy tools” such as EIA, SEA against environmental problems among the developing countries, one of which is Turkey. Project-level Environmental Assessment (EA), applied almost universally, has contributed into the prevention of the environmental effects of individual projects. However, there have been many changes since the first years when EA was introduced in the world (Goodland, 1998). To exemplify, the concept of “development” has deviated from national development into regional and global one, today National developments rely on international economic relationships, the activities and investments related to the environment have been achieved at the global scale policies and plans prepared for long term. In line with this, determination on the environmental effects of future-oriented development policies is more important than environmental assessment studies for individual projects. Although project EIA has become a useful tool in decision-making, it largely reacts to development proposals rather than proactively anticipating them (Briffett et al., 2003). Project-level EA has been practiced in Turkey since 1997. 952 EIA reports were prepared and concluded till 1.11.2004. However, today, the problems mainly from industry and energy; transportation, housing, agriculture, tourism sectors have decreased but they have still continued. Say (2000) and Yücel (2001) mentioned that SEA gains more importance gradually and it is inevitable to utilize SEA in the early phases of policy, plan and program in Turkey. Currently, SEA practice has been increasing; however, there are still defects about where and how to utilize it. Some development agencies, international organizations (CIDA, Danida, Sida, DfID, World Bank, AsDB, EC, ANSEA, USAID, etc.) and cabinets have now undertaken some forms and methods of SEA (Ng Leng and Obbard, 2005, Dalal-Clayton and Sadler, 2005b and OECD, 2005). Today, there is rapid transfer of technology from the developed countries to the developing countries, and to the countries in transition process, and this transfer includes the technology of EA methods (Brown, 2000). In some developing countries, including accession and pre-accession countries to the EU and countries that have ratified the SEA Protocol to the United Nations Economic Commission for Europe (UNECE) EIA Convention (Espoo), there are legal requirements to apply SEA to certain policies, plans and programs. In most developing countries, however, there are no formal requirements for SEA (OECD, 2005). New SEA regulations and guidelines are being proposed for national SEA legislation in many European countries after EU SEA-Directive. In 2002, preparations for the integration of SEA into the available legislation system were started by the Ministry of Environment and Forestry in Turkey. However, it is clear that how SEA will be carried out on which subjects will take time. This project is intended to analyze the typology of SEA and how SEA can be applied to five-year-development plans (FYDPs), which are at the top of planning hierarchy in Turkey.

When the development plans till today have been analyzed, it can be said that these plans included economic, social and political targets but no environmental assessment was conducted during the preparation phases. This study investigates the development of SEA in Turkey and opportunities about whether it could be practiced in the National Development Plans. When the long and complex preparation process of development plans is focused, it can be concluded that SEA practice should not interfere with this process and should be conducted in a systematic way. In other words, the SEA should be integrated into the planning process and should not be conducted as an external procedure. At the beginning of the study, it was decided that a broad evaluation system such as SEA was complex to implement into the developmental plans containing aims related to the macro-economic policies and social and economic sectors. Therefore, separate SEA studies are required for every sectors included in the developmental plans. And, the results obtained should be transmitted into the plan decisions. It is an undeniable fact that environmental assessment should be practiced into national development plans which are guiding all investments. One of the most significant means known today is SEA in order to attain this goal. As well as the suggestions given above, environmental assessment systems should not be regarded as a factor restricting the development activities but should be viewed as a requirement for development. In addition, this should be agreed by all people in the country.