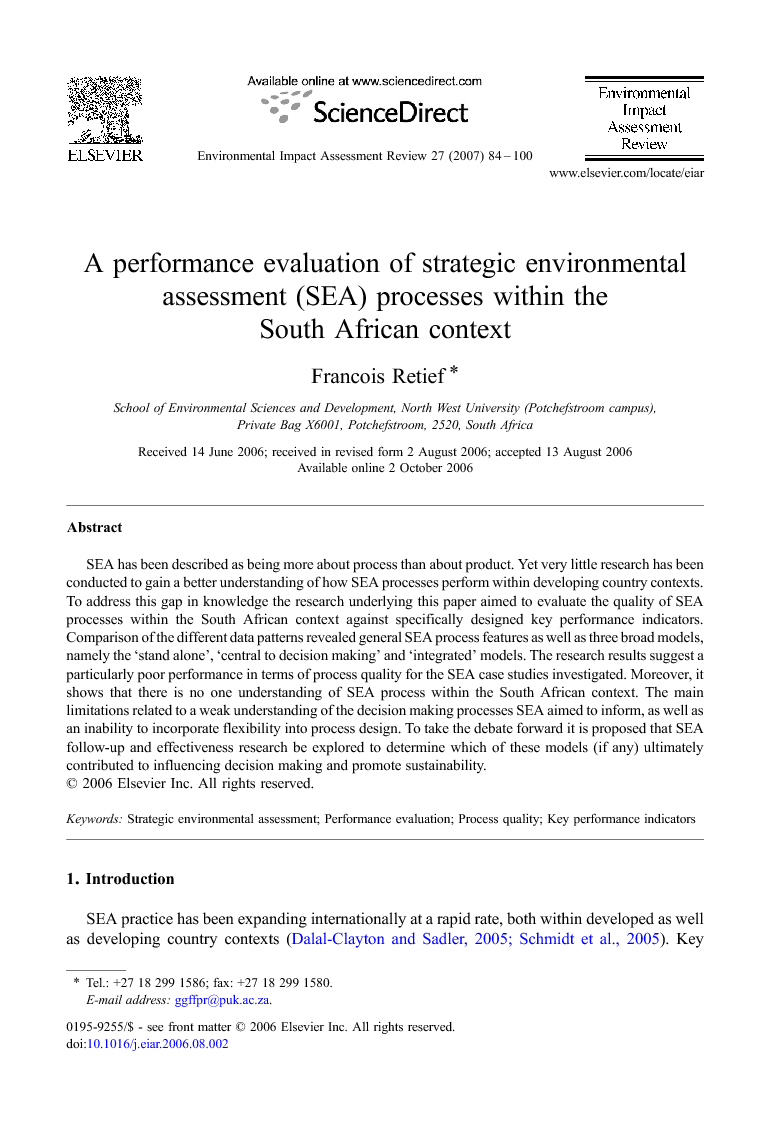 SEA has been described as being more about process than about product. Yet very little research has been conducted to gain a better understanding of how SEA processes perform within developing country contexts. To address this gap in knowledge the research underlying this paper aimed to evaluate the quality of SEA processes within the South African context against specifically designed key performance indicators. Comparison of the different data patterns revealed general SEA process features as well as three broad models, namely the ‘stand alone’, ‘central to decision making’ and ‘integrated’ models. The research results suggest a particularly poor performance in terms of process quality for the SEA case studies investigated. Moreover, it shows that there is no one understanding of SEA process within the South African context. The main limitations related to a weak understanding of the decision making processes SEA aimed to inform, as well as an inability to incorporate flexibility into process design. To take the debate forward it is proposed that SEA follow-up and effectiveness research be explored to determine which of these models (if any) ultimately contributed to influencing decision making and promote sustainability.

SEA practice has been expanding internationally at a rapid rate, both within developed as well as developing country contexts (Dalal-Clayton and Sadler, 2005 and Schmidt et al., 2005). Key landmark events such as the European Union SEA directive in 2001 and the World Summit on Sustainable Development in 2002 promoted the concept further and facilitated wide adoption. Since the earliest conceptualisation of SEA, understandings of SEA ‘process’ have been central to debate (Lee and Walsh, 1992, Therivel et al., 1992, Wood and Djeddour, 1992, Sadler and Verheem, 1996 and Therivel and Partidario, 1996). Various interpretations have emerged from simple procedural checks to comprehensive processes, depending on the context and availability of resources (Brown, 2000 and Therivel, 2004). Years of debate at the International Association for Impact Assessment culminated into international criteria for quality SEA processes (IAIA, 2002). Research in the application of the criteria suggested that it is not equally valid for all contexts and/or all types of assessments (Fischer, 2002, Noble, 2003 and Fischer and Gazzola, 2006). This notion that SEA needs to be developed and refined within a particular national context has been widely supported (Marsden, 1998, Thissen, 2000 and Dalal-Clayton and Sadler, 2005). Internationally South Africa is highlighted as a leading developing country in terms of the development of SEA1 (Therivel and Partidario, 2000 and Dalal-Clayton and Sadler, 2005). It has a long history of environmental assessment, which dates back to the 1970s (Sowman et al., 1995 and Mafune et al., 1997). Proposals for the introduction of SEA started in the early 1990s, and in 2000 SEA guidance was published (DEAT, 2000 and Rossouw et al., 2000). In terms of SEA practice, research shows that SEA has been widely undertaken voluntarily since the mid 1990s, with more than 50 SEAs identified (Retief, 2005). Yet, no empirical research has been conducted to describe the application of SEA processes within the country. The lack of empirical research to evaluate and learn from this wealth of practical experience can be considered a major lost opportunity not just for South Africa but also for the development of our understanding of SEA internationally and especially in the developing world. This paper provides the results of a review of the quality of SEA processes for six selected SEA case studies within South Africa. It starts by providing an overview of the international and South African debates around SEA process. This is followed by a brief overview of the research methodology after which the results are presented. The paper concludes by interpreting the research results in relation to the international debates on SEA process and by making recommendations for future research.

The research results showed that there is no one understanding of SEA process within the South African context and that the ‘process principles’ and ‘process elements’ included in the SEA guidance (DEAT, 2000) largely failed to facilitate a common understanding. Moreover the results suggested a particularly poor performance measured against the designed KPIs. The question is how do the results contribute in terms of the broader international debates on SEA process? Firstly, the call from the decision making and political sciences for more emphasis in SEA on understanding the dynamics of ‘real decision making’ (Kornov and Thissen, 2000 and Nilsson and Dalkmann, 2001), is not yet reflected in SEA practice. It is evident that SEA practitioners have a very weak understanding of strategic decision making processes related to the SEA and limited appreciation of the underlying political context. Instead the understanding of process still considers the need to have to deal with clearly defined steps and phases within a ‘rational’ decision making framework. The lack of consultation and political buy-in could also partly be ascribed to this particular understanding as well as the notion that SEA processes need to be ‘independent’ and deliver ‘objective’ results. Secondly the ‘stand alone’ and ‘integrated’ process models indicate that the broad international debate surrounding SEA as requiring a structured stand alone process (Fischer and Seaton, 2002 and Fischer, 2003) versus SEA as a more flexible and integrative process (Caratti et al., 2004 and Dalkmann et al., 2004) was also reflected. However, although the need for integration of strategic processes is acknowledged, the research results suggest an inability to deal with the ‘flexibility’ required in process design to facilitate integration. It is evident that structured SEA processes still retain wide appeal, both for SEA consultants and decision makers, primarily because such process designs seem easier to communicate and to explain and they potentially maintain the important feature of working towards a conclusive result or outcome. The overall research results would thus support the views of Fischer (2003) and Owens et al. (2004), that the well founded critique against the structured technical rational approaches to environmental assessment (Weston, 2004 and Richardson, 2005) has failed to deliver a viable alternative. It is proposed that, to take the debate forward, follow-up and effectiveness research is required to determine which of these models (if any) contributed to influencing decision making and promote sustainability. Thus a need exist to explore causality between process quality and ultimate effectiveness.