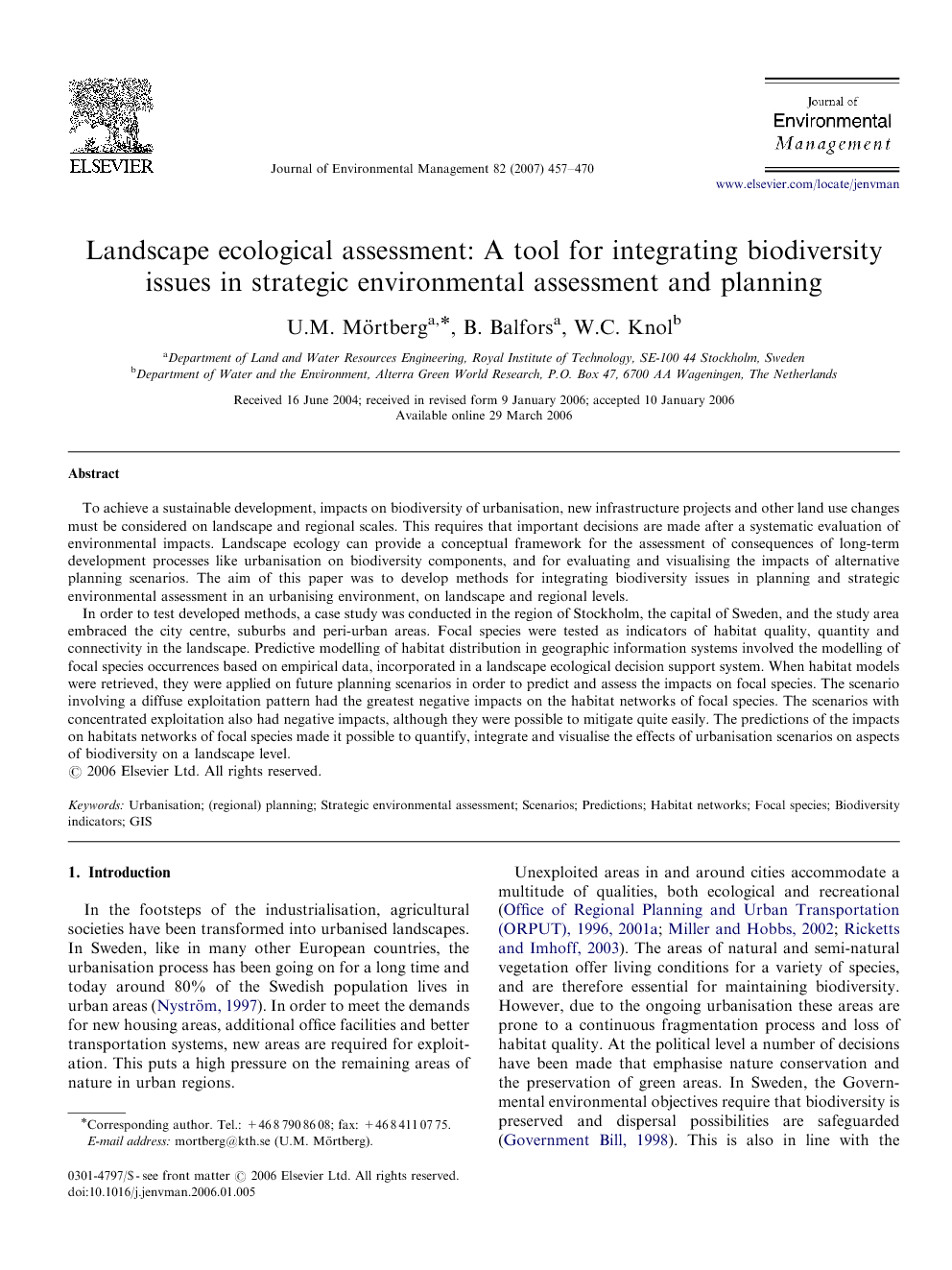 To achieve a sustainable development, impacts on biodiversity of urbanisation, new infrastructure projects and other land use changes must be considered on landscape and regional scales. This requires that important decisions are made after a systematic evaluation of environmental impacts. Landscape ecology can provide a conceptual framework for the assessment of consequences of long-term development processes like urbanisation on biodiversity components, and for evaluating and visualising the impacts of alternative planning scenarios. The aim of this paper was to develop methods for integrating biodiversity issues in planning and strategic environmental assessment in an urbanising environment, on landscape and regional levels. In order to test developed methods, a case study was conducted in the region of Stockholm, the capital of Sweden, and the study area embraced the city centre, suburbs and peri-urban areas. Focal species were tested as indicators of habitat quality, quantity and connectivity in the landscape. Predictive modelling of habitat distribution in geographic information systems involved the modelling of focal species occurrences based on empirical data, incorporated in a landscape ecological decision support system. When habitat models were retrieved, they were applied on future planning scenarios in order to predict and assess the impacts on focal species. The scenario involving a diffuse exploitation pattern had the greatest negative impacts on the habitat networks of focal species. The scenarios with concentrated exploitation also had negative impacts, although they were possible to mitigate quite easily. The predictions of the impacts on habitats networks of focal species made it possible to quantify, integrate and visualise the effects of urbanisation scenarios on aspects of biodiversity on a landscape level.

The prediction of biodiversity impacts is essential in the long-term planning of urbanised regions. In the context of strategic environmental assessment, LEA provides a tool to assess the potential impacts of planning and design options, to select those which minimise ecological risk and to plan measures for the mitigation of potential adverse impacts. In order to be able to make reliable predictions it is important to identify relevant biodiversity indicators, which are representative on landscape and/or regional scales. Within LEA specific landscape targets are defined, which take into consideration habitat networks of given sets of taxa related to these landscape targets, in a relatively transparent and exploratory framework. LEA provides a systematic procedure that encourages the exploration of data and priority settings that aims to quantitatively address landscape and ecosystem levels of biodiversity issues in an area. As in the case study, not all elements of biodiversity present in and around the city may benefit from considerations and protection of habitat networks of focal species. But the crucial environmental parameters involved—quality, quantity and connectivity of habitat types like mature and old coniferous forest, forest on rich soils, wet forest and mires—should favour a substantial part of the biodiversity in need of consideration and protection. When the habitat networks of a suite of focal species are taken into consideration and provided for, a landscape designed and managed to meet their needs will protect habitat for other species with similar requirements. The link to targets for landscape types and the explicit link to threatening processes make LEA useful in EIA and SEA, and thus has the potential to improve the quality of SEA's and ultimately contribute to sustainable planning and decision-making.