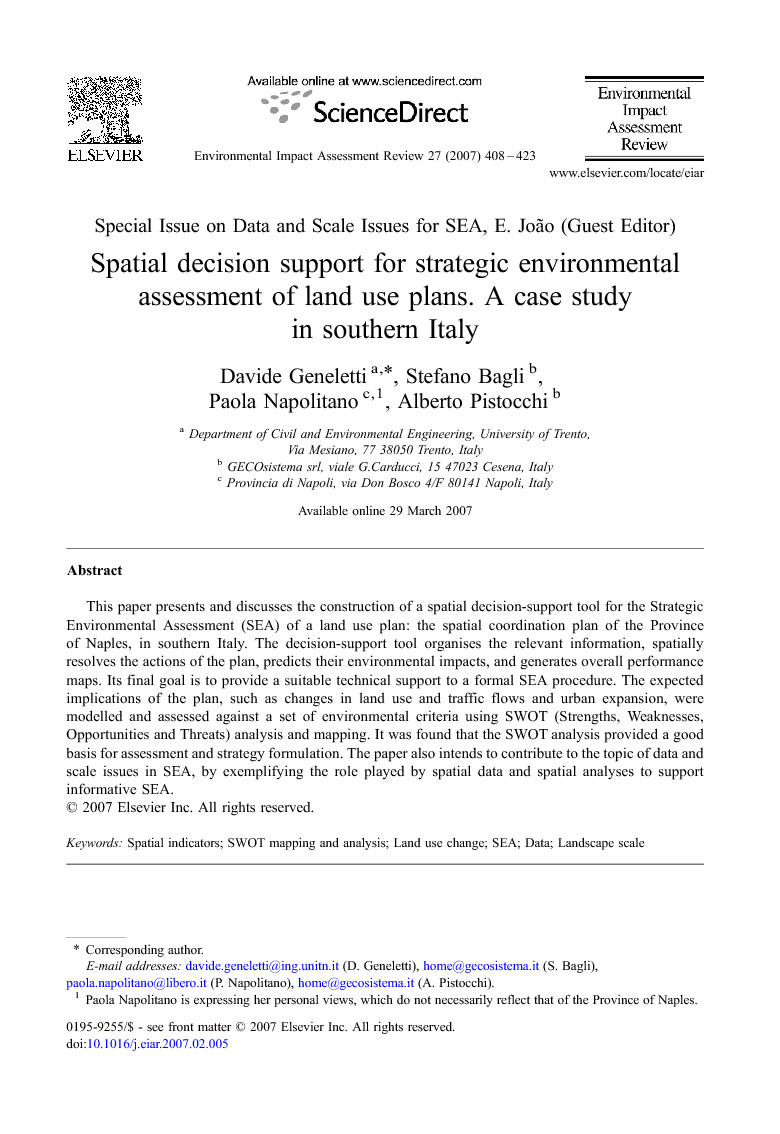 This paper presents and discusses the construction of a spatial decision-support tool for the Strategic Environmental Assessment (SEA) of a land use plan: the spatial coordination plan of the Province of Naples, in southern Italy. The decision-support tool organises the relevant information, spatially resolves the actions of the plan, predicts their environmental impacts, and generates overall performance maps. Its final goal is to provide a suitable technical support to a formal SEA procedure. The expected implications of the plan, such as changes in land use and traffic flows and urban expansion, were modelled and assessed against a set of environmental criteria using SWOT (Strengths, Weaknesses, Opportunities and Threats) analysis and mapping. It was found that the SWOT analysis provided a good basis for assessment and strategy formulation. The paper also intends to contribute to the topic of data and scale issues in SEA, by exemplifying the role played by spatial data and spatial analyses to support informative SEA.

The procedure of Strategic Environmental Assessment (SEA) is inextricably linked to decision-making (Sadler and Verheem, 1996). The SEA report is a decision-support instrument aimed at providing as detailed a picture as possible of the environmental impacts related to the implementation of a plan, policy or programme. In the case of plans, the SEA report must contain sufficient information to assess the acceptability of the impacts, and consequently to propose suitable modifications and mitigations. It can be argued that most of this information has a spatial component because geographical distribution of impacts plays a relevant role in determining how they are perceived by decision-makers, as well as by the affected stakeholders and the general public. Although this applies to all kinds of plans, it is particularly evident for land use plans, whose implications have an explicit spatial nature. The SEA Directive has not yet been implemented in Italy, even though provisions to perform SEA have been introduced by several regional governments, and integrated into their existing Environmental Impact Assessment (EIA) or territorial planning legislation. Consequently, interest is rising and pioneer studies have been blooming (Daini, 2002, Bagnati, 2003, Bollini et al., 2003, Bagnati, 2004, Baldizzone, 2004 and Giordano, 2005). However, there is not a consolidated approach widely accepted at a national level, and technical support (e.g., guidelines, best-practice handbooks) is lacking. Most of the pioneer experiences referred to the European Commission guidelines for the SEA of structural funds (EC, 1998). Although methodologically sound, the guidelines present limitations that hamper their application to land use plans. In particular, they do not specifically provide for the use of spatial data, relying entirely on matrix-based assessments. In other words, the performances of a plan are generalised over the whole territory, and assessed by aggregated indicator values, rather than by their geographical distributions. Even though there are examples of Italian SEAs in which spatial analyses and maps were extensively used (Provincia di Milano, 2003 and Bollini et al., 2003), the lack of technical guidance caused most studies not to account for the spatial representation of impact predictions. Consequently, key issues were disregarded (e.g., cumulative effects), reducing the effectiveness of SEA reports (Diamantini and Geneletti, 2004). The purpose of this study is to improve current SEA practice by constructing a spatial decision-support tool for the SEA of a land use plan. The paper intends to contribute to the topic of data and scale issues by discussing, through a real-life case, the role played by spatial data and spatial analyses in SEA. The decision-support tool aims at organising the relevant information, spatially resolving the actions of the plan, predicting their environmental impacts, and generating overall performance maps. Its final goal is to provide a suitable technical support to a formal SEA procedure. The latter obviously requires also other types of inputs, such as public consultation and setting of environmental targets, which are not addressed by this paper. The case study is represented by the spatial coordination plan of the Province of Naples, in southern Italy. The paper is structured as follows. Section 2 provides a description of the study region and of the spatial plan selected for the analysis. The methodology and its application to the case study are presented in Section 3, whereas Section 4 briefly discusses the results. Finally, Section 5 provides some conclusions and ideas for future applications and improvements.

This paper presented an approach to construct a spatial decision-support tool aimed at providing technical guidance to SEA of land use plans. The approach was tested using as a case study the spatial coordination plan of the Province of Naples. The method allowed organising the relevant information, spatially resolving the main actions of a plan, predicting their environmental effects, and generating overall performance maps. Comprehensive territorial plans are sometimes formulated in rather fuzzy terms, and it is not always straightforward to understand and predict what the proposals will imply in practice. Even harder is to do so in geographical terms, i.e., by forecasting the location of the changes steered by a plan, as well as the distribution of the consequent environmental impacts. Through this study, an effort was made to spatially model the expected implications of a plan, and to assess them against a set of environmental criteria. If SEA must provide timely and relevant information to decision-makers (Jones et al., 2005), then the spatial decision-support tool constructed here can ensure this through the identification of cornerstone objectives and indicators, as well as of operational ways to measure them in the light of the available data. The approach relied on data that are routinely acquired by the province administration, or that can be generated from such data with relatively little effort. These data have a spatial scale that range from 1:10,000 to 1:25,000, and are linked to metadata containing information on their quality and accuracy. This spatial scale proved adequate to SEA, allowing representing the most relevant environmental processes and land use patterns. The use of the existing GIS database of the Province of Naples allowed making the approach replicable and easily updatable. Furthermore, it reduced significantly the time and cost involved with the generation of the decision-support tool. Being based on data that are regularly collected, updated, and quality tested, the assessment framework built-up in this study represents a dynamic instrument that can be adapted to the volatile context of strategic decision-making. The output of this study is being used by the provincial administration to guide the on-going revision of the Naples Plan, and the concomitant SEA procedure. In particular, the analyses presented here are to be run in an interactive fashion by the administration officers to assess the suitability of the proposed zoning. The SWOT mapping can contribute to the proposal of zoning modifications, as well as mitigation and compensation measures. Modifications can be targeted to specific sites, and aimed at solving locally critical conditions. They can be implemented through a revision of a plan's provisions, such as the boundaries of developable land and the size threshold for new settlements. Mitigations can be introduced by new regulations to reduce the pressure on some of the environmental areas of concern (e.g., proposal of energy efficiency standard for new residential areas). Finally, compensation measures may be adopted for the areas overburdened with environmental impacts. Political proposals and ideas can be inputted, through technical officers, in the decision-support tool to generate and compare scenarios. The effectiveness of the procedure can be further enhanced by interacting with stakeholders, generating and assessing scenarios in an open planning process. This could be implemented with relatively little effort, at least for some well-defined analyses, such as the expected evolution of urban areas and the future pressure on nature-conservation sites. The decision-support tool allows for a high degree of interaction: transparency is guaranteed by a clear record of all evaluation stages, analyses are replicable, and the inputs that lead to composite assessments can be retrieved and modified. The decision-support tool is also suitable to contribute to other spatial planning activities at the province level. In particular, it can represent the backbone of the SEA of future sectoral plans, such as transportation, agricultural development, and water management plans. Even though further and more specific sectoral analyses and data would need to be integrated, the system provides a reference framework to identify the areas of concern, to structure the spatial data, and to model and assess the main environmental impacts. From a technical standpoint, future development of the approach should include uncertainty and sensitivity analyses. The assessment of the effects of a strategic proposal is characterised by an inherent high level of uncertainty (von Seht, 1999 and Wood and Djeddour, 1992), and prediction models must account for it. Following the approach proposed here, several scenarios could be constructed, simulating the effect of different policies, as well as their different degrees of implementation. This can be done in an iterative way, concomitantly with a plan's revision process. The spatial decision-support tool can be used as a reference framework in order to ensure transparency, consistency between simulations, and the generation of replicable results. Finally, from a procedural standpoint, the study could be extended to other critical aspects of SEA, such as public consultation and participation. In particular, people's perceptions and value judgments could be included, spatially resolved whenever appropriate, and linked to the relevant areas of concern.