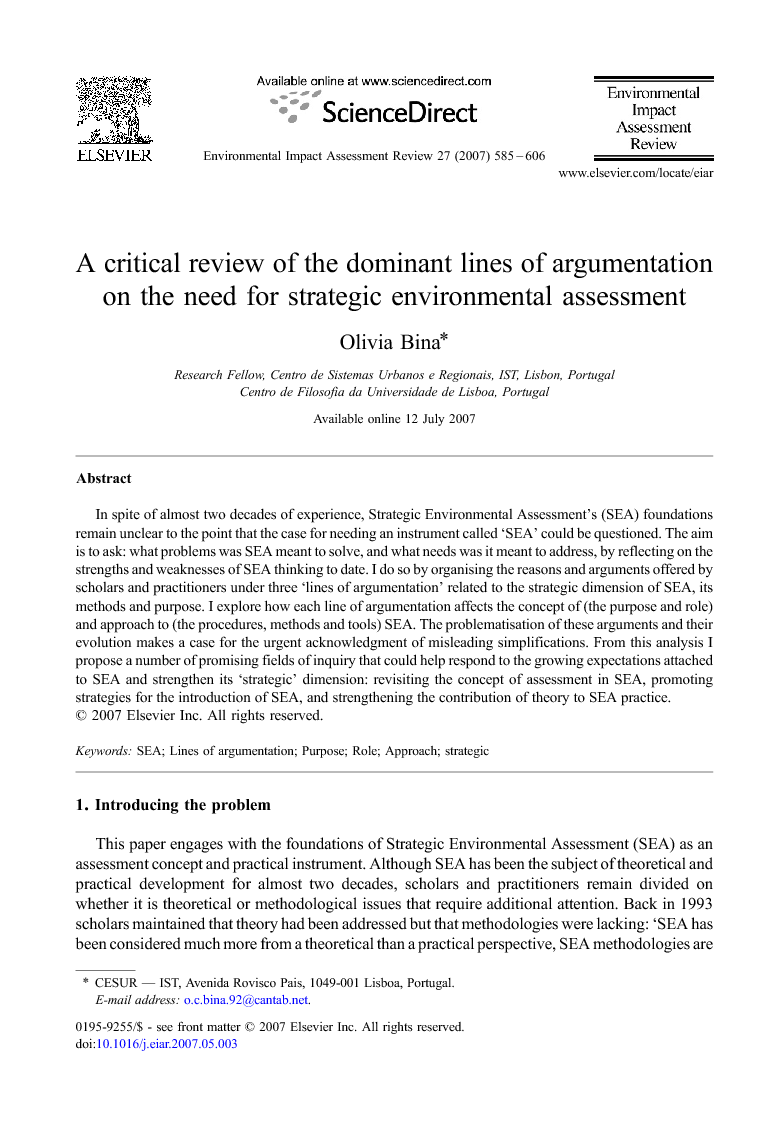 In spite of almost two decades of experience, Strategic Environmental Assessment's (SEA) foundations remain unclear to the point that the case for needing an instrument called ‘SEA’ could be questioned. The aim is to ask: what problems was SEA meant to solve, and what needs was it meant to address, by reflecting on the strengths and weaknesses of SEA thinking to date. I do so by organising the reasons and arguments offered by scholars and practitioners under three ‘lines of argumentation’ related to the strategic dimension of SEA, its methods and purpose. I explore how each line of argumentation affects the concept of (the purpose and role) and approach to (the procedures, methods and tools) SEA. The problematisation of these arguments and their evolution makes a case for the urgent acknowledgment of misleading simplifications. From this analysis I propose a number of promising fields of inquiry that could help respond to the growing expectations attached to SEA and strengthen its ‘strategic’ dimension: revisiting the concept of assessment in SEA, promoting strategies for the introduction of SEA, and strengthening the contribution of theory to SEA practice.

This paper engages with the foundations of Strategic Environmental Assessment (SEA) as an assessment concept and practical instrument. Although SEA has been the subject of theoretical and practical development for almost two decades, scholars and practitioners remain divided on whether it is theoretical or methodological issues that require additional attention. Back in 1993 scholars maintained that theory had been addressed but that methodologies were lacking: ‘SEA has been considered much more from a theoretical than a practical perspective, SEA methodologies are neither well-developed nor commonly agreed upon’ (Thérivel, 1993:164). Yet a decade later, questions about the conceptual basis of SEA were still being raised by scholars: ‘[SEA is] a … theme in need of reflection, since there has been much development of procedures and methodologies, but significantly less conceptual development’ (González, 2001:5). Practitioners agree: ‘SEA practice is ahead of theory … though we are not sure whether this is a good or a bad thing’.1 These concerns suggest, at a minimum, that early theoretical efforts have left several questions unanswered. Since the early 1990s, SEA commentators have mainly focused on specific practical aspects of SEA as a ‘tool’ applied to development initiatives (Dalal-Clayton and Sadler, 2005, Fischer, 2002, Partidario and Clark, 2000, Thérivel, 2004 and Thérivel et al., 1992), with comparatively few efforts dedicated to SEA theory (Caratti et al., 2004, Partidario, 1996, Richardson, 2005, Thissen, 2000 and Wallington, 2002). Despite SEA's roots in Environmental Impact Assessment (EIA) – which developed in the late 1960s – and almost two decades of experience, scholars and practitioners appear divided on such fundamental matters as the concept of and the approach to SEA. Throughout the instrument's career, divisions over these matters have contributed to innovations in process design and a widening choice of methods and tools, resulting in significant diversity in practice (for a recent overview, see Dalal-Clayton and Sadler, 2005). Yet despite such progress in practice, SEA's foundations have remained unclear: Does SEA differ from EIA? If so, are these differences related to the concept or the approach to assessment, or both? These are decisive times for SEA and such questions need urgent answers. Widespread application has led to a process of transformation involving greater complexity and differentiation in the way SEA is understood and applied. There has also been a systematic growth of expectations attached to SEA. Given the growing investments of governments, and multilateral and bilateral agencies, throughout the developed and developing world aimed at institutionalising SEA, it seems imperative to take stock of developments to date, so as to deepen our understanding about the kind of phenomenon SEA is and should be. This paper is intended as a contribution towards a better understanding of the foundations, the raison d'être, of SEA. The aim is to clarify the challenges to, and potential of, SEA at this critical and opportune stage in the instrument's evolution — a stage when significant attention and resources are being directed to its institutionalisation and application. To do so, I focus on the way scholars and practitioners have framed the case for the development of SEA: What problems was it meant to solve? What needs was it meant to address? To what extent has any of this been achieved? The arguments put forward by members of the SEA community (including scholars and practitioners) in answer to these questions are identified, in this paper, from multiple sources: published academic research, brown literature (especially guidance documents and case study reviews), ‘action research’ (SEA training, capacity building and review of SEA processes),2 interviews conducted as part of previous research undertaken by the author,3 and observations at seminars and conferences on SEA between 2001 and 2005.4 My analysis of the arguments arising from this material suggests that the foundations of SEA can be categorised according to three lines of argumentation, presented in Table 1. In the next three sections of this paper I analyse each line of argumentation in order to illuminate their implicit or explicit framing of SEA concepts and approaches. In doing so I distinguish between their early framing (late 1980s, early 1990s),5 and their evolution during the late 1990s. I explore in particular the links and overlaps between SEA concepts and approaches, and those of its precursor: EIA. In the final section I discuss the weaknesses and (somewhat hidden) strengths of such evolution, highlighting several challenges which, I contend, need to be addressed by SEA scholars and practitioners to strengthen the concept and approach to SEA (Table 2). For the sake of clarity, I wish to explain the use of key words throughout this paper. By the concept of SEA, I refer to the purpose and role of the instrument. The purpose indicates the broad, long-term reasons for institutionalising a system of SEA within a legal framework, a planning context, and/or a particular organisation. The role concerns the way SEA relates to planning and decision-making and interacts with a given institutional, administrative, cultural and political context. Furthermore, the concept of SEA should explain what it means for assessment to be ‘strategic’ and ‘environmental’. By the approach to SEA I refer to the way the instrument is applied in practice: the procedures, methods and tools adopted.