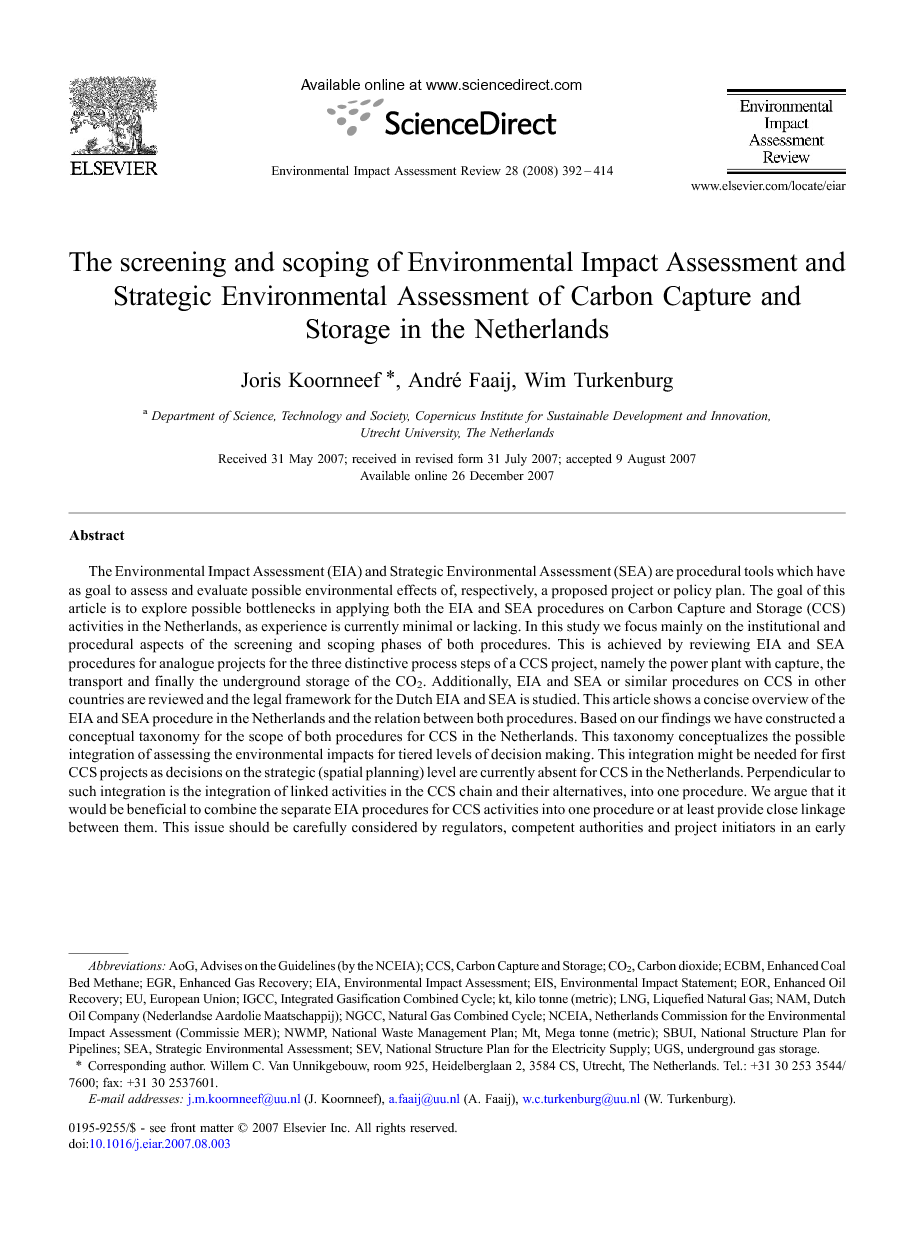 The Environmental Impact Assessment (EIA) and Strategic Environmental Assessment (SEA) are procedural tools which have as goal to assess and evaluate possible environmental effects of, respectively, a proposed project or policy plan. The goal of this article is to explore possible bottlenecks in applying both the EIA and SEA procedures on Carbon Capture and Storage (CCS) activities in the Netherlands, as experience is currently minimal or lacking. In this study we focus mainly on the institutional and procedural aspects of the screening and scoping phases of both procedures. This is achieved by reviewing EIA and SEA procedures for analogue projects for the three distinctive process steps of a CCS project, namely the power plant with capture, the transport and finally the underground storage of the CO2. Additionally, EIA and SEA or similar procedures on CCS in other countries are reviewed and the legal framework for the Dutch EIA and SEA is studied. This article shows a concise overview of the EIA and SEA procedure in the Netherlands and the relation between both procedures. Based on our findings we have constructed a conceptual taxonomy for the scope of both procedures for CCS in the Netherlands. This taxonomy conceptualizes the possible integration of assessing the environmental impacts for tiered levels of decision making. This integration might be needed for first CCS projects as decisions on the strategic (spatial planning) level are currently absent for CCS in the Netherlands. Perpendicular to such integration is the integration of linked activities in the CCS chain and their alternatives, into one procedure. We argue that it would be beneficial to combine the separate EIA procedures for CCS activities into one procedure or at least provide close linkage between them. This issue should be carefully considered by regulators, competent authorities and project initiators in an early stage to avoid delaying legal procedures in the future. For the same reason also early involvement of public, interested parties and the Netherlands Commission for the Environmental Impact Assessment in the scoping phase of the procedures is desired.

It is widely accepted that the emission of CO2 which is formed with the combustion of fossil fuels, contributes to the greenhouse effect and consequently to global warming. In the Dutch 4th National Environmental Policy Plan the capture of CO2 and its storage in the underground (CCS) is considered to be a third option (additional to energy conservation and renewable energy technologies) that may be applied to reduce anthropogenic CO2 emissions into the atmosphere substantially (VROM, 2001). In the most recent coalition agreement between the parliamentary groups of the Lower House targets were formulated to reduce Greenhouse Gas (GHG) emissions by 30% in 2020 compared to the level in 1990. This may provide a strong incentive to employ Carbon Capture and Storage in the Netherlands (CDA et al., 2007). The EIA procedure is a procedural tool, which has as goal to assess and evaluate possible environmental effects of a proposed project and its reasonable alternatives, which can have significant effects on the natural and man-made environment (Wood, 2003). A related procedure is the Strategic Environmental Assessment (SEA), which has as goal to include environmental impacts into strategic decision making by administrative bodies. More specifically, it applies on strategic decisions in governmental policies, plans and programs. Given that plans are currently being drafted for CCS (pilot) projects, there is a growing need for clarity on administrative, juridical and environmental implications of these projects (see also (Mace et al., 2007)). Furthermore, possibilities for participation of the public in both the SEA and EIA procedure may play an important role in the public acceptance of CCS plans and projects. This emphasizes that understanding is needed on how to apply both the EIA and SEA procedure in the case of CCS. International experience with the application of both procedural tools on CCS activities exists and is growing with the planning and implementation of CCS (demonstration) projects worldwide. In the Netherlands experience is minimal though growing with the initiation of several EIA's for power plants, which in the future may be equipped with CO2 capture installations (Commissie MER, 2006c, Commissie MER, 2006d and Commissie MER, 2006e). Another initiative, taken by the Dutch Oil Company (NAM) and supported by four provinces1, is also adding to the knowledge base: the AMESCO2 project. It has the goal to produce a paper which can be used as a reference guide for future EIA's for underground CO2 storage activities. This ‘generic’ EIA is being drafted to “prevent identical environmental studies being performed for each location” (Provincie Drenthe, 2006). Also, there is substantial experience gained with EIA procedures on projects which can be considered as analogues to CO2 capture, transport and storage. The goal of this article is to explore possible bottlenecks in applying both the EIA and SEA procedure on CCS activities in the Netherlands and suggest future actions to resolve these. Finnveden et al. (2003) distinguishes three elements of an SEA: institutional arrangements, the procedure and applied methods. To scope this study we follow this differentiation. A detailed overview of environmental impacts due to the application of CO2 capture, transport and storage in electricity generation is not within the scope of this article and will be the subject of future work. In this article we will focus mainly on the institutional and procedural aspects of both the EIA and SEA procedure applied on CCS projects. The procedures comprise several phases or steps to be concluded. In this article we will focus on the screening and scoping phase. Following the goal and demarcation of the study the following main research question is formulated: What are the possible concerns for project initiators and administrative bodies regarding the institutional arrangements and procedural elements in the screening and scoping phase of both the EIA and SEA procedure when applied on CCS activities? Specific questions to be answered are: o Under what circumstances is in the Netherlands an EIA required for the realization of CCS activities? o Under what circumstances is in the Netherlands an SEA required for the formulation of governmental plans which include CCS activities? o What are the reasonable alternatives for projects and plans to be assessed on various levels of decision making in both the EIA and SEA procedures for CCS activities?

Currently the legal status of CO2 is unclear. This makes it difficult to apply current EIA/SEA regulation and thresholds on CCS activities. The thresholds can be interpreted ambiguously for CO2 as no direct reference to CO2 is included in the EIA decree. Nevertheless, following current regulations, commercial scale CO2 capture and storage activities are by all appearances obligated to perform an EIA. Notwithstanding that clarity is needed on the EIA (judgement) obligation of the addition of a CO2 capture installation and for CO2 storage activities for which an EIA threshold is lacking and current thresholds do not apply. Transport of CO2 by pipeline is not likely to be EIA obligated, when assuming a direct dedicated connection between the source and the sink. Transport of CO2 by pipeline is only EIA (judgement) obligated when it encompasses large transport capacities (> 24 Mt/year) or is projected through sensitive areas. Short term actions to achieve clarity in this matter are recommended. These actions encompasses a formal statement by the government on the legal status of CO2 (dangerous waste, non-dangerous waste or asset) and how the EIA thresholds must be applied on CCS activities. This may require alteration or addition of thresholds in the regulations. In the case where EIA (judgement) obligation is uncertain it is recommended that project initiators start a voluntary EIA to avoid delay later in the decision making process. Governmental plans which contain decisions on the appointment of possible locations or routes, or the consideration of alternative locations or routes for CCS activities are expected to be SEA obligated. SEA-like procedures have been used in spatial planning decisions to determine possible locations for projects (i.e. designation of possible locations for power plants and routes of natural gas pipelines). This approach should be applied on the appointment of possible CO2 storage locations as well. This can be achieved by formulating one structure vision for a CCS infrastructure in which source and sink locations and transport routes for CO2 are identified at an early stage and included in strategic decision making for national and regional spatial planning. This will initiate an SEA for CCS activities preferably including the assessment of higher strategic alternatives such as renewables and energy saving measures. Early action may also avoid conflict with other surface and subsurface spatial functions (e.g. gas storage, earth heat, oil/gas extraction) and incorporate possible environmental impacts as criteria in strategic decision making. Performing an SEA for CCS first will have the benefit that the scope of following EIA procedures on the project level will not be subjected to vertical expansion and with it possibly ease the planning and implementation of future (commercial) CCS projects. Although the three distinctive steps of CCS (CO2 capture, transport and storage) are formally separated activities, we recommend combining the separate EIA procedures for CCS activities into one procedure or at least to provide close linkage between them. This can be achieved by applying the state project procedure on CCS projects. This provides overall insights into environmental burdens of the entire CCS chain and will streamline the various decision making procedures. If in practice the EIA procedure would be performed for the activities separately, then the EIA procedure should deal explicitly with the links with the other activities and their alternatives. This includes the assessment of environmental impacts of the full CCS chain induced by alternatives in the separately proposed CCS activity. These issues should be carefully considered by regulators, competent authorities and project initiators in an early stage to avoid delaying legal procedures. It is not the goal of this article to determine what the scope for both procedures for CCS projects should be. This should be the outcome of a process where all the relevant actors are consulted. Early involvement of public, interested parties and the NCEIA in the scoping phase of the procedures is desired. This may increase public awareness and societal acceptance, help focus the assessment and reduce the possibility of delay later in the decision making process. The findings presented above form the starting point of future work to provide more detailed insights into the environmental impacts of CCS activities and the methodologies used in EIA and SEA procedures to assess them.