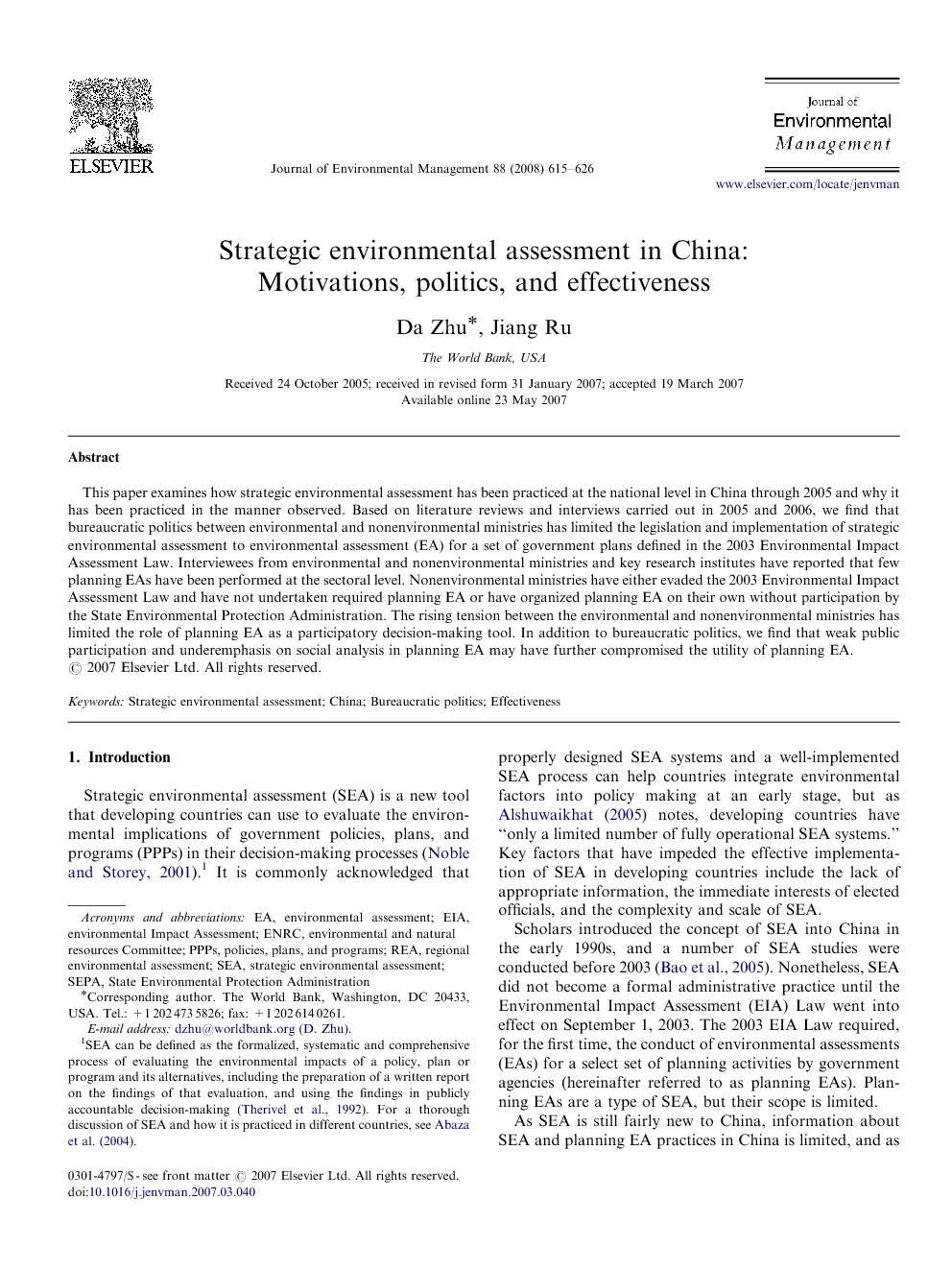 Strategic environmental assessment (SEA) is a new tool that developing countries can use to evaluate the environmental implications of government policies, plans, and programs (PPPs) in their decision-making processes (Noble and Storey, 2001).1 It is commonly acknowledged that properly designed SEA systems and a well-implemented SEA process can help countries integrate environmental factors into policy making at an early stage, but as Alshuwaikhat (2005) notes, developing countries have “only a limited number of fully operational SEA systems.” Key factors that have impeded the effective implementation of SEA in developing countries include the lack of appropriate information, the immediate interests of elected officials, and the complexity and scale of SEA. Scholars introduced the concept of SEA into China in the early 1990s, and a number of SEA studies were conducted before 2003 (Bao et al., 2005). Nonetheless, SEA did not become a formal administrative practice until the Environmental Impact Assessment (EIA) Law went into effect on September 1, 2003. The 2003 EIA Law required, for the first time, the conduct of environmental assessments (EAs) for a select set of planning activities by government agencies (hereinafter referred to as planning EAs). Planning EAs are a type of SEA, but their scope is limited. As SEA is still fairly new to China, information about SEA and planning EA practices in China is limited, and as of 2005, few studies on China's SEA efforts had been published in English. Che et al. (2002) discuss the need for and potential for conducting SEA in China, provide summaries of four SEA case studies, and propose suggestions for conducting SEA in China. Xu et al. (2003) propose SEA procedures for China and review a case study of an SEA for wastewater reuse policies in a Chinese city. Bao et al. (2004) present a framework and operational procedures for SEA administration and enforcement, as well as nine SEA case studies. Most recently, Zhu et al. (2005) detail the legal requirements for planning EA set out in the 2003 EIA Law, such as major purposes, key elements, and procedures. In terms of the literature on SEA in Chinese, as Che et al. (2002) note, “Most of [the] research (on SEA in China) has been focused on the concept, theory, and method of SEA.” As of 2005, neither the Chinese nor the English literature had paid much attention to the institutional environment within which SEA is conducted. Topics such as the adaptation of SEA concepts, the motivation and politics underlying legally mandated planning EA, and the implications of current institutional arrangements for the effectiveness of planning EA have yet to be examined. Based on a literature review and 16 interviews conducted in March 2005, June 2005, and May 2006, this paper examines the inadequacies in current research on China's SEA practices and, in particular, explores how SEA has been practiced and why the national government has practiced it in the manner observed. Our focus is limited to the national government largely because of few reported SEA activities at the local government level. Please note also that this paper aims to examine the implementation status of planning EA in China, but is not intended to provoke academic debates on SEA concepts, on what constitutes best practice in SEA, or on EA in general. We carried out semistructured interviews with 16 interviewees. We asked about (a) interviewees’ personal involvement in SEA and planning EA, (b) interviewees’ personal observations about planning EA practices in the national government or in their particular ministries, and (c) interviewees’ interpretations of why planning EA has been implemented in the way they observed. The 16 interviewees were three top SEA professors from Beijing, Nankai, and Tongji normal universities who have been actively involved in SEA studies and in planning EA projects with various ministries as independent experts; a retired senior official who led the State Environmental Protection Administration's (SEPA's) efforts in relation to passage of the 2003 EIA Law; four senior staff from the Appraisal Center for Environment and Engineering who have organized and participated in SEA training and in planning EA projects2; three midlevel officials from the Ministry of Railway who are in charge of planning, EA affairs, and SEA training, respectively; a senior official from the Ministry of Transport who oversees EA and planning EA issues in the ministry; two senior researchers from the China Academy of Transportation Science, a research institute affiliated with the Ministry of Transport who are actively engaged in planning EA projects; a senior manager from a private EA consulting firm; and a midlevel official from the Ministry of Agriculture who is involved in SEA training. This paper uses a six-digit number when referring to interviews. The first two digits indicate the year of the interview, the third and fourth digits indicate the month, and the last two digits indicate the individual interview. In this paper, we first review how SEA concepts were introduced into China. Next we analyze the legislative process that led to the 2003 EIA Law and the motivation and politics underlying the legislation and highlight key characteristics of the law. After that, we examine how the 2003 EIA Law has been implemented through 2005 by highlighting interactions between SEPA and nonenvironmental ministries. We conclude by summarizing our findings.

In this paper, we have demonstrated that China has adopted SEA concepts as a rational response to serious environmental problems caused by development policies that have frequently failed to integrate environmental factors in the decision-making process. We find that this rational response has arisen as a result of advocacy activities by scholars, two national environmental institutions (SEPA and the ENRC), and international support. As most of the nonenvironmental agencies viewed SEA as an unrealistic policy measure supported by SEPA to expand its own political power, SEPA and the ENRC negotiated the final version of the 2003 EIA Law to include a requirement for EAs for a selected set of planning activities by government agencies, but not for all government PPPs and strategic initiatives. Bureaucratic politics between environmental and nonenvironmental interests shaped the 2003 EIA Law and resulted in the law's three limitations: limited scope, ambiguous role of environmental authorities in regulating planning EA, and undefined public participation in planning EA. As of 2005, bureaucratic politics has continued to influence the implementation of planning EA. In particular, at the national level, nonenvironmental ministries have evaded SEPA's interference in their decision-making processes either by approving plans without conducting planning EA or by failing to involve SEPA in reviewing planning EAs. In response to this, SEPA has tried to establish its role in reviewing and clearing planning EA, and thus to supervise other ministries in complying with the 2003 EIA Law. In addition to bureaucratic politics, the lack of public participation in planning EAs has prevented planning EAs from serving as a participatory tool whereby nonenvironmental ministries can be transparent about their decision-making processes. Together, bureaucratic politics and the lack of public participation have resulted in a lack of external supervision mechanisms that ensure that the goal of planning EA, to mainstream and upstream environmental considerations in policy and planning processes, can be achieved. Consequently, compliance with the 2003 EIA Law will have to be monitored through supervision mechanisms internal to pertinent government agencies.33 However, Li and Hu (2004) document that internal supervision mechanisms are able to encourage, but not force, the government to comply with the law. The behaviors of nonenvironmental ministries reported in this paper prove this observation. The current institutional arrangement for planning EA is still an intermediate solution. As this paper noted, new rounds of interaction between environmental agencies and nonenvironmental agencies are ongoing. Whether SEPA will finally win the authority to review and clear planning EA in the near future is hard to predict. As this paper shows, key factors that have impeded the effective implementation of planning EA in China are different from the factors in other developing countries as reported by Alshuwaikhat (2005). Rather than the lack of appropriate information, the immediate interests of elected officials, and the complexity and scale of SEA, bureaucratic politics, lack of public participation, and underemphasis on social analysis have influenced national-level planning EA activities in China. Clearly these differences are a reflection of the current situation of the Chinese political system in general. Observations made in this paper would benefit from additional information from officials who have participated in the legislation and implementation of the 2003 EIA Law. We recognize that evidence from other nonenvironmental ministries is needed to corroborate our interview data. Additional studies are also needed to follow up on new developments in bureaucratic politics in planning EA and to examine how SEPA has organized SEA and planning EA in aforementioned regions and sectors.