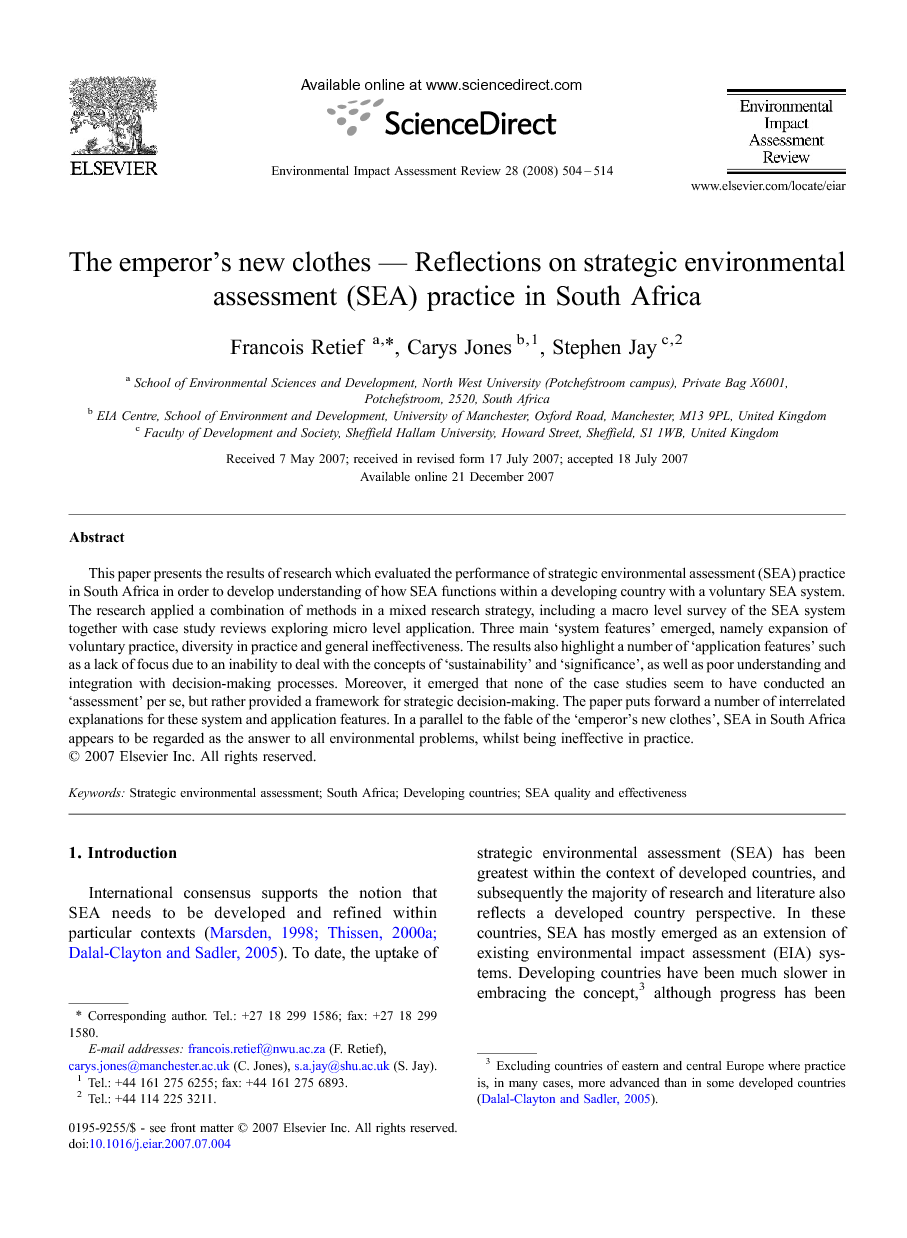 This paper presents the results of research which evaluated the performance of strategic environmental assessment (SEA) practice in South Africa in order to develop understanding of how SEA functions within a developing country with a voluntary SEA system. The research applied a combination of methods in a mixed research strategy, including a macro level survey of the SEA system together with case study reviews exploring micro level application. Three main ‘system features’ emerged, namely expansion of voluntary practice, diversity in practice and general ineffectiveness. The results also highlight a number of ‘application features’ such as a lack of focus due to an inability to deal with the concepts of ‘sustainability’ and ‘significance’, as well as poor understanding and integration with decision-making processes. Moreover, it emerged that none of the case studies seem to have conducted an ‘assessment’ per se, but rather provided a framework for strategic decision-making. The paper puts forward a number of interrelated explanations for these system and application features. In a parallel to the fable of the ‘emperor's new clothes’, SEA in South Africa appears to be regarded as the answer to all environmental problems, whilst being ineffective in practice.

International consensus supports the notion that SEA needs to be developed and refined within particular contexts (Marsden, 1998, Thissen, 2000a and Dalal-Clayton and Sadler, 2005). To date, the uptake of strategic environmental assessment (SEA) has been greatest within the context of developed countries, and subsequently the majority of research and literature also reflects a developed country perspective. In these countries, SEA has mostly emerged as an extension of existing environmental impact assessment (EIA) systems. Developing countries have been much slower in embracing the concept,3 although progress has been made in recent years (Lee and George, 2000, Dalal-Clayton and Sadler, 2005 and Schmidt et al., 2005). Funding and donor agency requirements, such as the World Bank safeguard policies, were the main drivers for SEA in these countries. However, there are two main reasons why environmental assessment generally, and SEA specifically, are critically important within developing country contexts. The first relates to the structure of their economies. Developing countries rely heavily on primary economic activities such as agriculture, tourism and mining. Moreover, a large number of developing countries, especially in sub-Saharan Africa, also accommodate subsistence farming communities, which are particularly vulnerable to environmental degradation. This implies that the livelihoods and wellbeing of these countries are directly related to the way they manage their natural resources. Secondly, almost all so-called ‘biodiversity hotspots’, and the majority of pristine environments, are located within developing countries (World Conservation Monitoring Centre — WCMC, 2002). This means that sound environmental management in these countries is not only important from a global biodiversity and conservation perspective, but also in terms of ecosystem services provided and therefore contributes to wider well being in these countries. South Africa is considered a leading developing country in terms of the evolution of SEA (Therivel and Partidario, 2000 and Dalal-Clayton and Sadler, 2005) and a key player in the development of environmental assessment in the African and Southern African Development Community region (Weaver et al., 2002, Southern African Institute for Environmental Assessment, 2003 and Tarr, 2003). It is also considered as one of the few developing countries to have developed a ‘home grown’ approach and identity for SEA, and SEA practice in South Africa seems to have expanded rapidly (Department of Environmental Affairs and Tourism, 2000, Rossouw et al., 2000 and Retief et al., 2007). Despite this, debates and reflection on the identity of SEA have stagnated recently. The need for SEA, together with its purpose and definition put forward in the SEA guidance, has not been critically reviewed since 2000, and empirical research on the wealth of practice has been very limited. The result is that there is little ongoing understanding of how SEA functions within the South African context. This can be considered a lost opportunity towards gaining a better understanding of SEA within developing countries, and how its evolution might be advanced. In order to address some of these concerns, the research reported here provides one of the few attempts to gain a better understanding of how, and if, SEA works. A mixed research strategy was utilised which included a general survey to gauge the overall status and extent of SEA practice, as well as more detailed case study reviews on the quality and effectiveness of SEA. This paper first deals with the macro level ‘SEA system’ by highlighting key features and then provides four possible explanations for these features. This is followed by an analysis of the key features of the micro level ‘application of SEA’, for which explanations are also put forward. Each feature and explanation is described and justified based on the triangulation of the survey and case study research results, together with international and South African perspectives on SEA. The strength of each explanation lies in its ability to provide a plausible account, based on the research results from a range of sources, for each one of the relevant system or application features.

The various understandings and interpretations of SEA that have arisen internationally have led to SEA becoming something of an enigma to researchers who aim to formulate a common standardised understanding of SEA. However, it is increasingly being recognised that SEA is evolving into different forms according to the different contexts in which it is developed. In this context, the research described in this article illustrates the contribution that performance evaluation can make towards a better understanding of how SEA functions within a particular setting. Combining evaluation at both the macro systems level as well as the micro application level produces a holistic perspective of an SEA system, and identifies key features at different scales. Explanations can then be put forward for the observed patterns. Linking performance (i.e. effectiveness) with an evaluation of the SEA system and practice is crucially important, because it leads to the consideration of explanations for the progress made in the application of SEA. With regard to the situation in South Africa, it is tempting to propose one single overarching explanation for the performance of SEA from those put forward in this article. However, due to the complexities involved, such a single explanation is bound to be incomplete and inconclusive. Instead, a number of interrelated explanations are suggested based on key system and application features. When considering the application (as opposed to implementation of findings or effectiveness in practice) of SEA it is concluded that a combination of factors can lead to the introduction of extensive SEA practice on a wide front, even in a voluntary SEA system like South Africa's. These include a broad enabling legal framework together with a strong consultancy sector. This can take place even against the background of much confusion and lack of clarity on the definition of SEA, and even without explicit SEA legislation. Moreover, an expansion in practice can be achieved without strong commitment from politicians, or adequate capacity within the public sector. Many of the perceived barriers to the introduction and application of SEA do not, therefore, seem to apply to the South African context and possibly also not to other similar developing countries. However, the current research suggests that SEA practice in South Africa resembles a technical–rational approach, and is thus technocratic, information driven, objective, extensive and expensive. It is also procedurally structured and isolated. In terms of SEA implementation in practice three key factors emerge that influence effectiveness. Firstly, an explicit legal framework, providing backing for the implementation of SEA outcomes is clearly required. Without it, SEA proposals and recommendations will most probably be ignored. Secondly, the mandate for the implementation of SEA outcomes clearly lies with decision makers and not consultants. It can thus be expected that SEA will be ineffective in contexts where SEA is principally consultancy driven and divorced from decision-making. This is because consultants are primarily in the business of selling knowledge (in the form of information), and do not seek to engage with decision-making that is beyond their mandate. Thirdly, and following on from the previous point, it is imperative that the public sector has the capacity to take ownership of the SEA outcomes to ensure their implementation. This aspect is expected to emerge as a challenge for most developing countries. At a simplified level, the conclusions of the research bear resemblance to the moral of the fable, ‘the emperor's new clothes’, in which nobody admitted that they could not see the clothes, not even the king, resulting in his public mortification. Similar to the invisible ‘magic cloth’, SEA was introduced as a potential panacea for all environmental problems in South Africa. Despite the lack of agreement and clear understanding of what SEA is (and being ‘invisible’ to most), it was widely embraced and promoted. A situation emerged where SEA essentially meant everything to everybody, but nothing of substance! The lack of critical feedback, aptly highlighted in the fable, is also borne out by the research as, notwithstanding the time and resources allocated, SEA in its current form is not achieving its ultimate objectives within the South African context. Nonetheless, the research presented in this article shows that valuable steps have been made in developing SEA capacity, particularly within the private sector, and that the legislative framework is established that could facilitate the emergence of a more effective approach to SEA within South Africa. To take the debate a step further it is proposed that research focusing on causality between input quality and output effectiveness be conducted with a view to making viable recommendations for SEA practice that would provide for effective SEA outcomes. Such research should build on the explanations provided in this paper by placing particular emphasis on the drivers for conducting SEA in the first place as well as the barriers to the implementation of SEA outcomes. The theoretical grounding explaining what SEA is, and what it aims to achieve needs to be strengthened, linked to follow-up research gauging the overall effect of SEA. To date a lot of effort has been spend exploring practice without having a strong theoretical basis to reflect on, or a clear understanding of what we are achieving. Continuous debate is required that tests our understanding of theory (what should happen), practice (what did happen) and effects (what was the result).