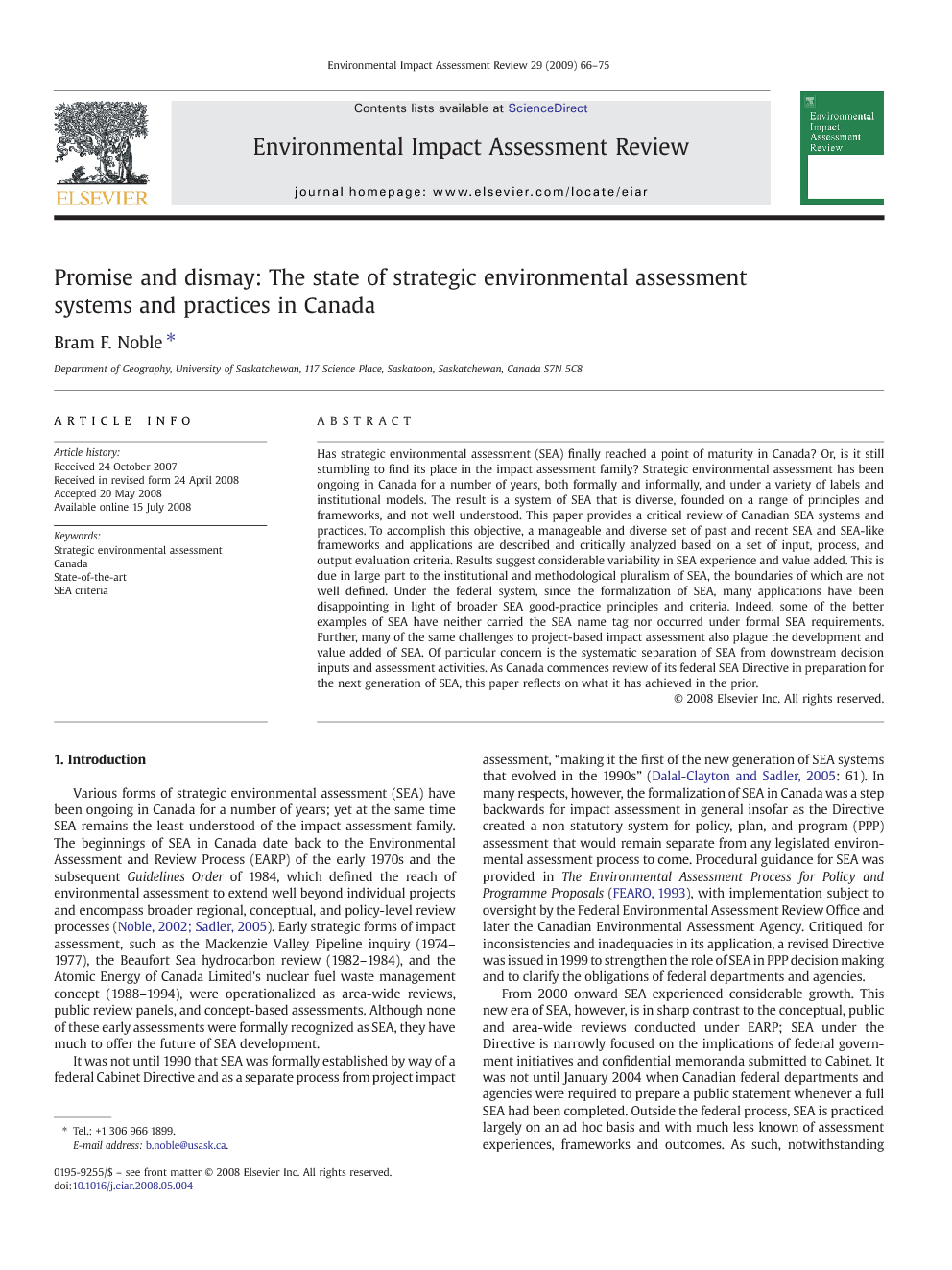 Has strategic environmental assessment (SEA) finally reached a point of maturity in Canada? Or, is it still stumbling to find its place in the impact assessment family? Strategic environmental assessment has been ongoing in Canada for a number of years, both formally and informally, and under a variety of labels and institutional models. The result is a system of SEA that is diverse, founded on a range of principles and frameworks, and not well understood. This paper provides a critical review of Canadian SEA systems and practices. To accomplish this objective, a manageable and diverse set of past and recent SEA and SEA-like frameworks and applications are described and critically analyzed based on a set of input, process, and output evaluation criteria. Results suggest considerable variability in SEA experience and value added. This is due in large part to the institutional and methodological pluralism of SEA, the boundaries of which are not well defined. Under the federal system, since the formalization of SEA, many applications have been disappointing in light of broader SEA good-practice principles and criteria. Indeed, some of the better examples of SEA have neither carried the SEA name tag nor occurred under formal SEA requirements. Further, many of the same challenges to project-based impact assessment also plague the development and value added of SEA. Of particular concern is the systematic separation of SEA from downstream decision inputs and assessment activities. As Canada commences review of its federal SEA Directive in preparation for the next generation of SEA, this paper reflects on what it has achieved in the prior.

Various forms of strategic environmental assessment (SEA) have been ongoing in Canada for a number of years; yet at the same time SEA remains the least understood of the impact assessment family. The beginnings of SEA in Canada date back to the Environmental Assessment and Review Process (EARP) of the early 1970s and the subsequent Guidelines Order of 1984, which defined the reach of environmental assessment to extend well beyond individual projects and encompass broader regional, conceptual, and policy-level review processes ( Noble, 2002 and Sadler, 2005). Early strategic forms of impact assessment, such as the Mackenzie Valley Pipeline inquiry (1974–1977), the Beaufort Sea hydrocarbon review (1982–1984), and the Atomic Energy of Canada Limited's nuclear fuel waste management concept (1988–1994), were operationalized as area-wide reviews, public review panels, and concept-based assessments. Although none of these early assessments were formally recognized as SEA, they have much to offer the future of SEA development. It was not until 1990 that SEA was formally established by way of a federal Cabinet Directive and as a separate process from project impact assessment, “making it the first of the new generation of SEA systems that evolved in the 1990s” (Dalal-Clayton and Sadler, 2005: 61). In many respects, however, the formalization of SEA in Canada was a step backwards for impact assessment in general insofar as the Directive created a non-statutory system for policy, plan, and program (PPP) assessment that would remain separate from any legislated environmental assessment process to come. Procedural guidance for SEA was provided in The Environmental Assessment Process for Policy and Programme Proposals (FEARO, 1993), with implementation subject to oversight by the Federal Environmental Assessment Review Office and later the Canadian Environmental Assessment Agency. Critiqued for inconsistencies and inadequacies in its application, a revised Directive was issued in 1999 to strengthen the role of SEA in PPP decision making and to clarify the obligations of federal departments and agencies. From 2000 onward SEA experienced considerable growth. This new era of SEA, however, is in sharp contrast to the conceptual, public and area-wide reviews conducted under EARP; SEA under the Directive is narrowly focused on the implications of federal government initiatives and confidential memoranda submitted to Cabinet. It was not until January 2004 when Canadian federal departments and agencies were required to prepare a public statement whenever a full SEA had been completed. Outside the federal process, SEA is practiced largely on an ad hoc basis and with much less known of assessment experiences, frameworks and outcomes. As such, notwithstanding decades of SEA development in Canada there remains only limited knowledge of the diverse nature and scope of SEA systems and practices and the value added to PPP development and decision making. Aside from selected reviews of individual applications under the Canadian federal system (e.g. Auditor General, 2004, Hazell and Benevides, 1998, Noble, 2004, Noble, 2003 and Sadler, 2005), there has not been an examination of Canadian SEA models and frameworks that includes both formal and informal applications across a range of federal and provincial PPP initiatives. In response, this paper provides a critical review of formal and informal SEA systems and practices in Canada. More specifically, the objective is to present and evaluate a range of SEA case applications, characteristic of a variety of SEA models and frameworks, with a view to understanding how each incorporated a number of proposed SEA principles and design criteria and contributed to improved decision making. The case analysis is based on work completed by the author for the Canadian Minister of Environment's Regulatory Advisory Committee, Sub-Committee on SEA (herein referred to as the SEA Sub-Committee), in preparation for the review of the Canadian SEA Directive—the Canadian Cabinet Directive on the Environmental Assessment of Policy, Plan, and Program Proposals. Lessons learnt from the case reviews, together with the Directive review, will set the stage for discussions concerning the ‘next generation’ of SEA in Canada. This paper is presented in five sections, including the Introduction. In the sections that follow the study approach and review framework and criteria are presented. This is followed by a critical review of selected Canadian SEA experiences, and the results of the review framework application. The paper concludes with a number of observations concerning the state of SEA systems and practices in Canada, and opportunities and challenges for the next generation of SEA.