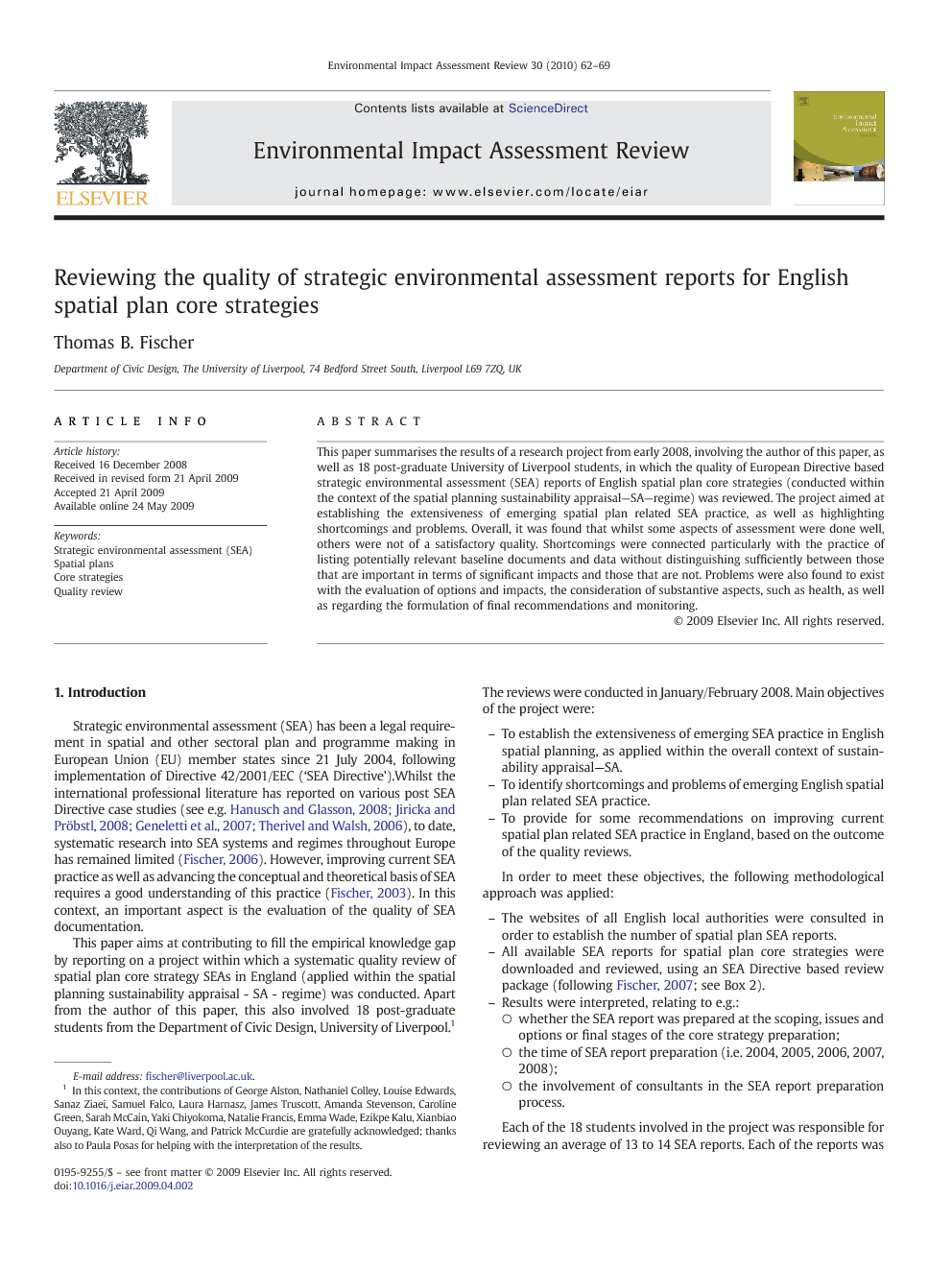 This paper summarises the results of a research project from early 2008, involving the author of this paper, as well as 18 post-graduate University of Liverpool students, in which the quality of European Directive based strategic environmental assessment (SEA) reports of English spatial plan core strategies (conducted within the context of the spatial planning sustainability appraisal—SA—regime) was reviewed. The project aimed at establishing the extensiveness of emerging spatial plan related SEA practice, as well as highlighting shortcomings and problems. Overall, it was found that whilst some aspects of assessment were done well, others were not of a satisfactory quality. Shortcomings were connected particularly with the practice of listing potentially relevant baseline documents and data without distinguishing sufficiently between those that are important in terms of significant impacts and those that are not. Problems were also found to exist with the evaluation of options and impacts, the consideration of substantive aspects, such as health, as well as regarding the formulation of final recommendations and monitoring.

Strategic environmental assessment (SEA) has been a legal requirement in spatial and other sectoral plan and programme making in European Union (EU) member states since 21 July 2004, following implementation of Directive 42/2001/EEC (‘SEA Directive’).Whilst the international professional literature has reported on various post SEA Directive case studies (see e.g. Hanusch and Glasson, 2008, Jiricka and Pröbstl, 2008, Geneletti et al., 2007 and Therivel and Walsh, 2006), to date, systematic research into SEA systems and regimes throughout Europe has remained limited (Fischer, 2006). However, improving current SEA practice as well as advancing the conceptual and theoretical basis of SEA requires a good understanding of this practice (Fischer, 2003). In this context, an important aspect is the evaluation of the quality of SEA documentation. This paper aims at contributing to fill the empirical knowledge gap by reporting on a project within which a systematic quality review of spatial plan core strategy SEAs in England (applied within the spatial planning sustainability appraisal - SA - regime) was conducted. Apart from the author of this paper, this also involved 18 post-graduate students from the Department of Civic Design, University of Liverpool.1 The reviews were conducted in January/February 2008. Main objectives of the project were: – To establish the extensiveness of emerging SEA practice in English spatial planning, as applied within the overall context of sustainability appraisal—SA. – To identify shortcomings and problems of emerging English spatial plan related SEA practice. – To provide for some recommendations on improving current spatial plan related SEA practice in England, based on the outcome of the quality reviews. In order to meet these objectives, the following methodological approach was applied: – The websites of all English local authorities were consulted in order to establish the number of spatial plan SEA reports. – All available SEA reports for spatial plan core strategies were downloaded and reviewed, using an SEA Directive based review package (following Fischer, 2007; see Box 2). – Results were interpreted, relating to e.g.: ○ whether the SEA report was prepared at the scoping, issues and options or final stages of the core strategy preparation; ○ the time of SEA report preparation (i.e. 2004, 2005, 2006, 2007, 2008); ○ the involvement of consultants in the SEA report preparation process. Each of the 18 students involved in the project was responsible for reviewing an average of 13 to 14 SEA reports. Each of the reports was also reviewed by at least one other student and jointly agreed marks were allocated. Furthermore, reviews were repeated after a full round of initial reviews. Finally, all reviews were checked by the author of this paper. Only results of those reviews are subsequently presented that had been found to be meaningful and consistent. These include about half of all reviews originally conducted by the students (117 of 240). A list of those local authority core strategies covered in this paper is provided in Box 1. Subsequently, first the spatial planning and SEA system in England will be outlined. This will be followed by a general overview of the extent of spatial plan core strategy related SEA application. The SEA reports' quality review methodology is explained and quality review results are presented. Finally, conclusions are drawn and recommendations are given.

This paper summarises the results of quality reviews of 117 English spatial plan core strategy SEA reports. These were conducted by the author of this paper in collaboration with 18 post-graduate students of the Department of Civic Design at the University of Liverpool in January/February 2008. A quality review package was used, based on EIA report review packages developed earlier in the 1980s/1990s. Overall, 304 local authorities were identified to have LDF related SA practice with a total of 773 LDF related SEA exercises being conducted within the overall context of sustainability appraisal (SA). Furthermore, 240 core strategy related SEA exercises were identified. The quality reviews of 117 core strategy related SEAs showed that that there were a number of shortcomings. These were particularly evident in the SEA reports prepared for the final core strategies (as opposed to scoping and issues and options versions). In this context, practice of unsatisfactory performance was found less in connection with the presentation of environmental baseline documents and data, but rather with a failure of using those later when evaluating options. Overall, main problems existed with respect to seven aspects. These include an unsatisfactory explanation of connections with other levels and tiers of decision making. Furthermore, it includes an unsatisfactory coverage of reasonable options and evaluation of their impacts. Whilst there are examples where human health risks are considered in a satisfactory manner, on average, this had been found to be done poorly. The impact of the SEA, as well as of the public participation exercise was also only insufficiently explained. Finally, uncertainties and difficulties of assessment, as well as the elaboration of monitoring measures were all done in an unsatisfactory manner. Various recommendations can be given for improving the practice of SEA in spatial plan core strategy making, based on the findings presented above. Firstly, and possibly most crucially, whilst SEA reports had been found to provide for some rather extensive lists of other policies, plans and programmes and baseline data that may have been of relevance for the assessment, no distinction was normally made regarding their significance in terms of some clearly defined options in the spatial plan. A clearer distinction should be made between relevant and irrelevant data. This would require the identification of a limited number of clearly defined options before a decision was made on what data/information are needed. Currently, first documentation and data are compiled before possible options are identified, making this decision impossible. Secondly, the link with subsequent decision making needs to be strengthened. In this context, a decision on what may be addressed elsewhere would help distinguishing between relevant and irrelevant information. Thirdly, regarding assessment options, in the context of core strategy making, the focus should be on a limited number of clearly defined options, rather than on options for e.g. each suggested spatial policy, which often means that several hundreds of options are in effect considered, making the assessment incomprehensible. Also, some authorities still use ‘plan’ versus ‘no-plan’ as an option. However, this together with ‘made-up’ options (e.g. ‘restrict amount of development land, not taking account of local needs’) had previously been labelled inappropriate or ‘pseudo’ options (Fischer and Gazzola, 2007). Fourthly, there is currently scope for improving the consideration of health risks, as well as for addressing uncertainties and difficulties faced by SEA better. Regarding the former, health organisations and institutions can potentially play a more important role than they have done to date. Regarding the latter, SEA reports need to be more explicit on where certainty is high and where it is low. Fifthly, a clearer evaluation of the impact of SEA and of public participation on the strategy is required. In this context, the formulation of explicit monitoring programmes will be vital. Sixthly, in strategic level assessment, the degree of uncertainly in making predictions is particularly high. In this context, the level of confidence for making predictions should be clearly outlined. Finally, the possibility to monitor developments and impacts should be taken into account right from the start of the SEA process. Predictions that cannot be monitored later are unlikely to be useful.