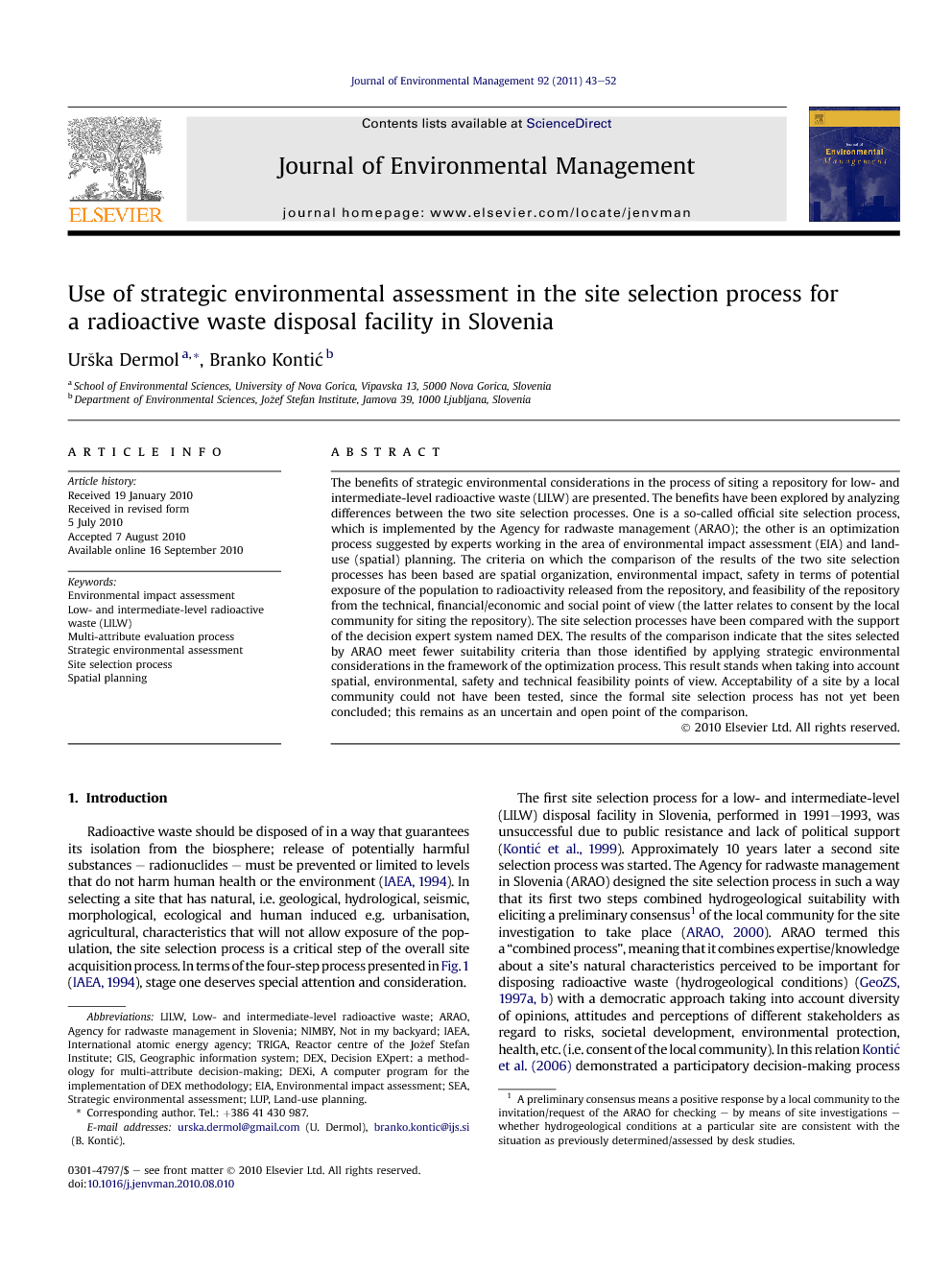 The benefits of strategic environmental considerations in the process of siting a repository for low- and intermediate-level radioactive waste (LILW) are presented. The benefits have been explored by analyzing differences between the two site selection processes. One is a so-called official site selection process, which is implemented by the Agency for radwaste management (ARAO); the other is an optimization process suggested by experts working in the area of environmental impact assessment (EIA) and land-use (spatial) planning. The criteria on which the comparison of the results of the two site selection processes has been based are spatial organization, environmental impact, safety in terms of potential exposure of the population to radioactivity released from the repository, and feasibility of the repository from the technical, financial/economic and social point of view (the latter relates to consent by the local community for siting the repository). The site selection processes have been compared with the support of the decision expert system named DEX. The results of the comparison indicate that the sites selected by ARAO meet fewer suitability criteria than those identified by applying strategic environmental considerations in the framework of the optimization process. This result stands when taking into account spatial, environmental, safety and technical feasibility points of view. Acceptability of a site by a local community could not have been tested, since the formal site selection process has not yet been concluded; this remains as an uncertain and open point of the comparison.

Radioactive waste should be disposed of in a way that guarantees its isolation from the biosphere; release of potentially harmful substances – radionuclides – must be prevented or limited to levels that do not harm human health or the environment (IAEA, 1994). In selecting a site that has natural, i.e. geological, hydrological, seismic, morphological, ecological and human induced e.g. urbanisation, agricultural, characteristics that will not allow exposure of the population, the site selection process is a critical step of the overall site acquisition process. In terms of the four-step process presented in Fig. 1 (IAEA, 1994), stage one deserves special attention and consideration. The first site selection process for a low- and intermediate-level (LILW) disposal facility in Slovenia, performed in 1991–1993, was unsuccessful due to public resistance and lack of political support (Kontić et al., 1999). Approximately 10 years later a second site selection process was started. The Agency for radwaste management in Slovenia (ARAO) designed the site selection process in such a way that its first two steps combined hydrogeological suitability with eliciting a preliminary consensus1 of the local community for the site investigation to take place (ARAO, 2000). ARAO termed this a “combined process”, meaning that it combines expertise/knowledge about a site’s natural characteristics perceived to be important for disposing radioactive waste (hydrogeological conditions) (GeoZS, 1997a and GeoZS, 1997b) with a democratic approach taking into account diversity of opinions, attitudes and perceptions of different stakeholders as regard to risks, societal development, environmental protection, health, etc. (i.e. consent of the local community). In this relation Kontić et al. (2006) demonstrated a participatory decision-making process involving the authorities at local level, experts, and the public, with a strong potential for achieving agreement between the parties involved. A weak point in the ARAO’s combined process is that a significant number of hydrogeologically suitable areas may be lost after the second stage of the process if local communities reject proposals for site investigations on their territory. This loss of potential sites from further consideration actually happened during the second site selection process, resulting in only a few candidate sites (territories). Speaking from the site selection process point of view, it is important to note that such an approach can easily result in the final selection of a site which has the consent of the local community but is less suitable from a number of other points of view, e.g. economic, land-use (agricultural, residential, recreational, etc.), nature protection, etc. In such a case, the resulting site may not be optimized in terms of applied suitability criteria, i.e. environmental, economical, technical, spatial (land-use) and safety (Watson, 1981). In order to check this hypothesis we designed a study to explore Slovenian territory in the context of its suitability for disposing LILW, taking into account all the above-mentioned criteria. The resulting suitable sites were compared with the sites that resulted from the ARAO site selection process. The comparison has been performed as a pre-stage of the strategic environmental assessment (SEA) associated with the plan for constructing a LILW repository in Slovenia. The reason for such an approach was the ambiguity in the formal SEA procedure in Slovenia which does not explicitly require prior, early planning stage comparison of site alternatives for the implementation of a plan/policy/programme, as is the praxis in other countries, e.g., Denmark, UK, Netherlands, USA (Morrison et al., 1996, The League of Women Voters Education Fund, 1993 and Therivel, 2004). The two sets of sites were compared using DEX (Bohanec, 2003, 1995). DEX enables an analyst to be systematic, comprehensive, and scientifically sound, maintaining clarity and transparency of the overall process for the purpose of subsequent auditing by any stakeholder. More about DEX is available in Appendix 1.

It is now more than fifteen years since Slovenia started searching for an appropriate site for disposing of low- and intermediate-level radioactive waste. The first site selection process started in 1991 and was stopped in 1993 due to strong public resistance. The second process started in 2003 and is expected to be finalized in 2010; this process is led by the Agency for radwaste management and builds on the so-called “local partnership” which allows for local communities involved in the site selection process to be compensated by (up to) 2.3 million € annually. An additional key characteristic of this “partnership” is that the local community is able to cease collaboration with the ARAO at any stage of the site selection process. Such an approach involves risks of two kinds: first, the risk of not getting final consent by the local community for constructing the repository at an otherwise suitable site, and secondly, the risk of getting consent for a site which poorly meets suitability criteria. This paper has analyzed the evidence/addressed the question as to whether the latter could really happen in Slovenia, based on the results of the actual site selection process. The results of the analysis show that the answer is yes, since the Krško site, which has been identified as one of the two sites where local community consent is expected, is the least suitable of eight sites in terms of fulfilling suitability criteria. The clear recommendation to the ARAO is to start a new negotiation process with the local communities whose site suitability has been better evaluated than in Krško, in order to achieve consent for construction of the repository. This should be carried out in the formal process of revising the spatial plan of the specific municipality. Elements of SEA, as implemented in the optimization site selection process and presented in this paper, should be properly considered in the revised spatial planning.