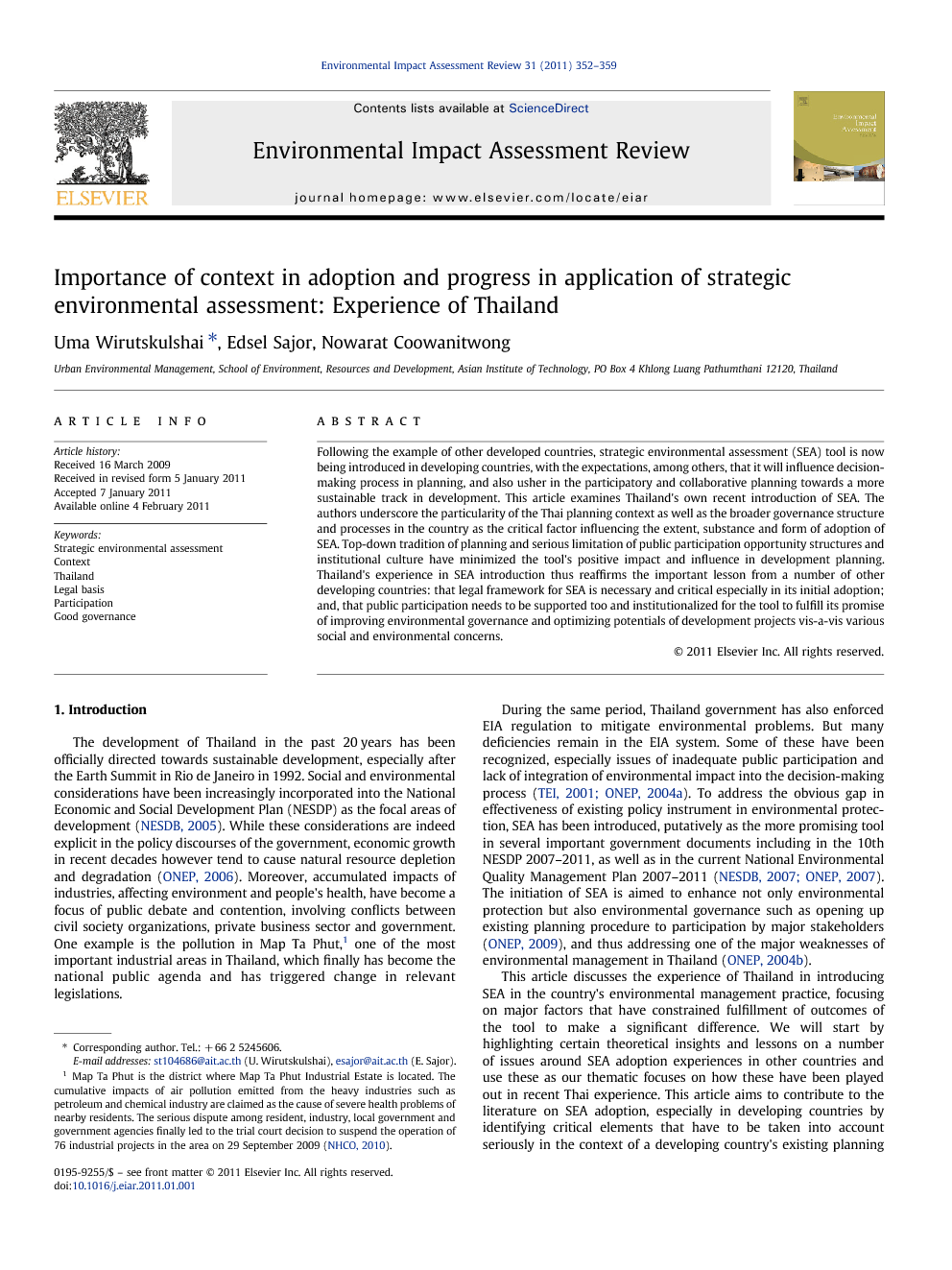 Following the example of other developed countries, strategic environmental assessment (SEA) tool is now being introduced in developing countries, with the expectations, among others, that it will influence decision-making process in planning, and also usher in the participatory and collaborative planning towards a more sustainable track in development. This article examines Thailand's own recent introduction of SEA. The authors underscore the particularity of the Thai planning context as well as the broader governance structure and processes in the country as the critical factor influencing the extent, substance and form of adoption of SEA. Top-down tradition of planning and serious limitation of public participation opportunity structures and institutional culture have minimized the tool's positive impact and influence in development planning. Thailand's experience in SEA introduction thus reaffirms the important lesson from a number of other developing countries: that legal framework for SEA is necessary and critical especially in its initial adoption; and, that public participation needs to be supported too and institutionalized for the tool to fulfill its promise of improving environmental governance and optimizing potentials of development projects vis-a-vis various social and environmental concerns.

The development of Thailand in the past 20 years has been officially directed towards sustainable development, especially after the Earth Summit in Rio de Janeiro in 1992. Social and environmental considerations have been increasingly incorporated into the National Economic and Social Development Plan (NESDP) as the focal areas of development (NESDB, 2005). While these considerations are indeed explicit in the policy discourses of the government, economic growth in recent decades however tend to cause natural resource depletion and degradation (ONEP, 2006). Moreover, accumulated impacts of industries, affecting environment and people's health, have become a focus of public debate and contention, involving conflicts between civil society organizations, private business sector and government. One example is the pollution in Map Ta Phut,1 one of the most important industrial areas in Thailand, which finally has become the national public agenda and has triggered change in relevant legislations. During the same period, Thailand government has also enforced EIA regulation to mitigate environmental problems. But many deficiencies remain in the EIA system. Some of these have been recognized, especially issues of inadequate public participation and lack of integration of environmental impact into the decision-making process (TEI, 2001 and ONEP, 2004a). To address the obvious gap in effectiveness of existing policy instrument in environmental protection, SEA has been introduced, putatively as the more promising tool in several important government documents including in the 10th NESDP 2007–2011, as well as in the current National Environmental Quality Management Plan 2007–2011 (NESDB, 2007 and ONEP, 2007). The initiation of SEA is aimed to enhance not only environmental protection but also environmental governance such as opening up existing planning procedure to participation by major stakeholders (ONEP, 2009), and thus addressing one of the major weaknesses of environmental management in Thailand (ONEP, 2004b). This article discusses the experience of Thailand in introducing SEA in the country's environmental management practice, focusing on major factors that have constrained fulfillment of outcomes of the tool to make a significant difference. We will start by highlighting certain theoretical insights and lessons on a number of issues around SEA adoption experiences in other countries and use these as our thematic focuses on how these have been played out in recent Thai experience. This article aims to contribute to the literature on SEA adoption, especially in developing countries by identifying critical elements that have to be taken into account seriously in the context of a developing country's existing planning tradition. We hope to ground expectations on what this management tool can or cannot immediately deliver in improving environmental management under certain governance conditions particularly pervasive in middle-income developing countries such as Thailand.

Context is critical to the success and progress, or failure in SEA's implementation and outcomes in a country. This is indeed true in Thailand's experience in SEA as it is in many other places elsewhere. In the foregoing study we have argued that the particularity of the Thai planning context as well as the broader governance structure and processes in the country has influenced the extent, substance and form of adoption of SEA. Top-down tradition of planning and serious limitation of public participation opportunity structures and institutional culture have minimized SEA's positive impact and influence in development planning and projects. The four cases presented illustrate clearly, among others, that SEA has not been integrated and does not influence decision-making in development, contrary to expectations associated with its introduction in Thailand. Invariably, except in one case, public participation in the conduct of SEA has also been absent, seriously flawed or tokenistic. These weaknesses in SEA implementation shown by the four cases have been further affirmed in the surveys conducted by authors on SEA stakeholders, practitioners and planners in the government. Based on their perception, legal instruments explicitly and directly requiring linking of SEA to decision making and planning processes, and radical improvement in the conduct of public participation, including access and quality of data, are the two most important problems needed to be addressed in order to generate momentum of SEA implementation and for it to generate expected positive outcomes in development. Thailand's experience in SEA introduction reaffirms an important lesson in SEA adoption by a number of other countries: that legal framework for SEA is necessary and critical especially in its initial adoption. It will boost political and management leadership commitment, factors which highly influence elements of planning process such as cooperation between officials, resource allocation, and task prioritization. Particular design of the legal instruments and mandate can also closely bind decision-making and planning to SEA. On the other hand, public participation in SEA needs to be supported too and institutionalized for the tool to fulfill its promise of improving environmental governance and optimizing potentials of development projects vis-a-vis various social and environmental concerns. To support the participatory aspect, decision makers have to sincerely welcome the public in the arena of decision-making. At the same time, a specific and explicit supporting law (i.e. participation law), needs to be enacted to further legitimate the right of the public and enable resource mobilization and development of appropriate procedures to be followed in the conduct of public participation. More importantly, it would bind the relevant agencies to undertake collaborative planning and responsive actions. Creating momentum for public participation as one of the important elements of SEA, in turn, may lead to building the capacity of stakeholders, interest groups and public, which are all necessary for generating meaningfulness of the exercise in public participation in the long run. Thailand's own experience in introducing and adopting SEA in development planning is particularly relevant to a number of middle-income developing countries, most especially in Southeast Asia region. Similar to Thailand's case, a number of countries in this region are middle-income nations, pursuing fast-track economic growth led by rapid export-oriented industrialization and foreign investments in the manufacturing sector. Such current model of development has been proven to be highly resource depleting, and environmentally and socially costly. Thus, a SEA tool that is effectively and widely practiced in development planning and projects has become an imperative. Yet, paradoxically these countries too, just like Thailand, have serious historical deficits in democratic and participatory governance and effective public (including legal) institutions that can manage development towards more socially and environmentally desirable paths. Certain dominant features of these countries' political and governance system therefore pose a threat to SEA's breakthrough and progress. But on the other hand, the introduction of SEA itself, if properly handled, could provide a good opportunity for significant governance and institutional reforms in development in the long haul.