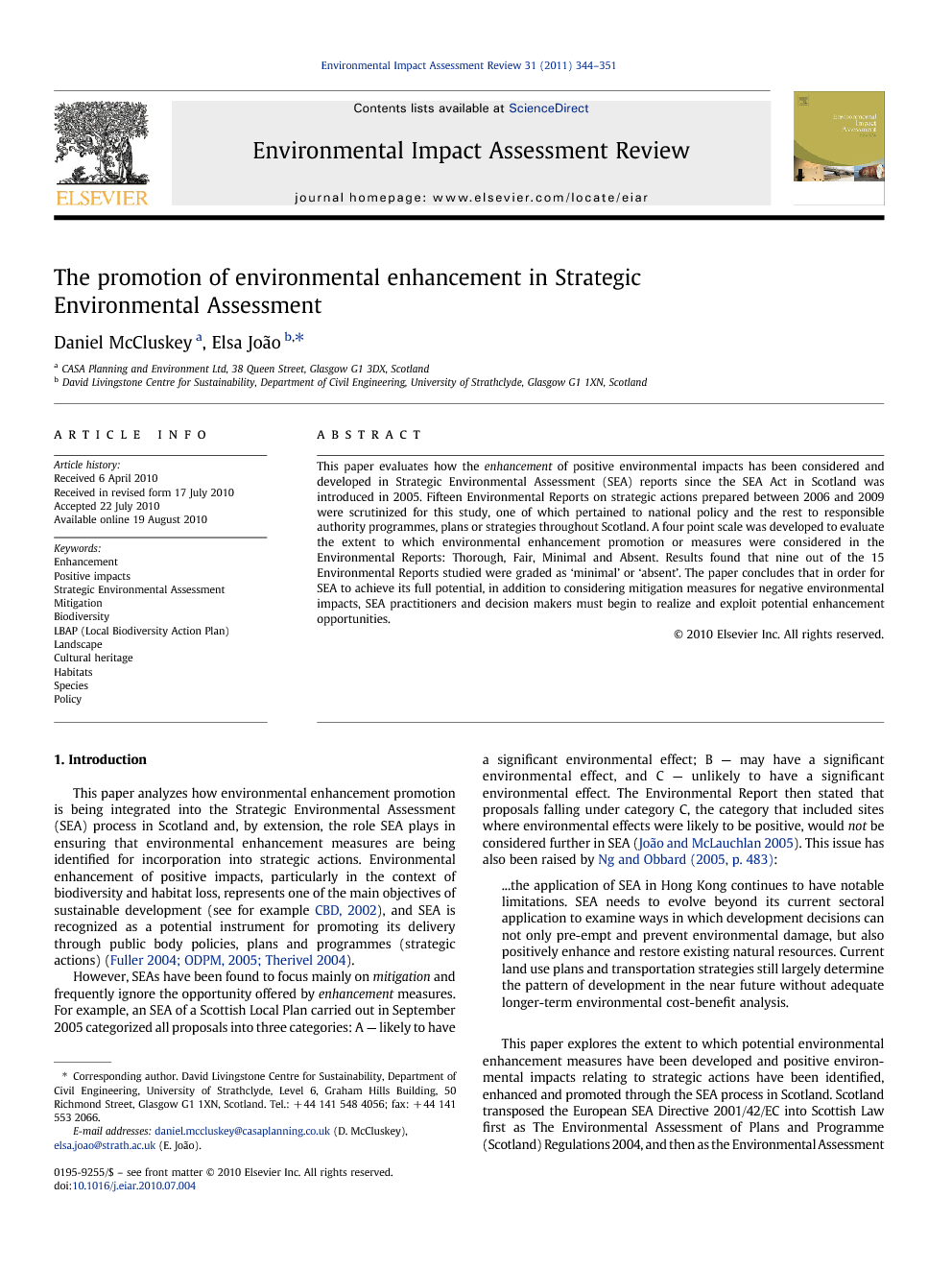 This paper evaluates how the enhancement of positive environmental impacts has been considered and developed in Strategic Environmental Assessment (SEA) reports since the SEA Act in Scotland was introduced in 2005. Fifteen Environmental Reports on strategic actions prepared between 2006 and 2009 were scrutinized for this study, one of which pertained to national policy and the rest to responsible authority programmes, plans or strategies throughout Scotland. A four point scale was developed to evaluate the extent to which environmental enhancement promotion or measures were considered in the Environmental Reports: Thorough, Fair, Minimal and Absent. Results found that nine out of the 15 Environmental Reports studied were graded as ‘minimal’ or ‘absent’. The paper concludes that in order for SEA to achieve its full potential, in addition to considering mitigation measures for negative environmental impacts, SEA practitioners and decision makers must begin to realize and exploit potential enhancement opportunities

This paper analyzes how environmental enhancement promotion is being integrated into the Strategic Environmental Assessment (SEA) process in Scotland and, by extension, the role SEA plays in ensuring that environmental enhancement measures are being identified for incorporation into strategic actions. Environmental enhancement of positive impacts, particularly in the context of biodiversity and habitat loss, represents one of the main objectives of sustainable development (see for example CBD, 2002), and SEA is recognized as a potential instrument for promoting its delivery through public body policies, plans and programmes (strategic actions) (Fuller, 2004, ODPM Office of the Deputy Prime Minister, 2005 and Therivel, 2004). However, SEAs have been found to focus mainly on mitigation and frequently ignore the opportunity offered by enhancement measures. For example, an SEA of a Scottish Local Plan carried out in September 2005 categorized all proposals into three categories: A — likely to have a significant environmental effect; B — may have a significant environmental effect, and C — unlikely to have a significant environmental effect. The Environmental Report then stated that proposals falling under category C, the category that included sites where environmental effects were likely to be positive, would not be considered further in SEA (João and McLauchlan 2005). This issue has also been raised by Ng and Obbard (2005, p. 483): ...the application of SEA in Hong Kong continues to have notable limitations. SEA needs to evolve beyond its current sectoral application to examine ways in which development decisions can not only pre-empt and prevent environmental damage, but also positively enhance and restore existing natural resources. Current land use plans and transportation strategies still largely determine the pattern of development in the near future without adequate longer-term environmental cost-benefit analysis. This paper explores the extent to which potential environmental enhancement measures have been developed and positive environmental impacts relating to strategic actions have been identified, enhanced and promoted through the SEA process in Scotland. Scotland transposed the European SEA Directive 2001/42/EC into Scottish Law first as The Environmental Assessment of Plans and Programme (Scotland) Regulations 2004, and then as the Environmental Assessment (Scotland) Act (2005) (hereafter referred to as the SEA Act), with the number of strategic actions being subject to SEA rising from 25 in 2005 to 111 in 2008 (Scottish Government 2009a). Scotland represents an interesting national case study as the Scottish Government committed, through the SEA Act, to extend the requirement of the SEA Directive – which only requires that certain plans and programmes be exposed to the SEA process – to include all plans, programmes and strategies being taken forward by the public sector or responsible authorities preparing strategic actions with a public character (with a few exemptions such as budgets). This decision was in accordance with the Scottish Government's commitment to integrating the principles of sustainable development into Scottish policy (Scottish Government 2005) and its ambition to become a “world leader” in SEA (SEEG, Scottish Executive Environment Group 2004). In order to introduce the context of the analysis of this paper, some examples of how SEA can contribute to environmental enhancement and how it relates to sustainable development are introduced. The method used to select and evaluate the 15 Environmental Reports with regard to environmental enhancement is thereafter presented and the results and analysis are then discussed in the context of the SEA Act and guidance on SEA for practitioners. The paper concludes by offering some recommendations for SEA policy and practice, as well as some suggestions for future research.