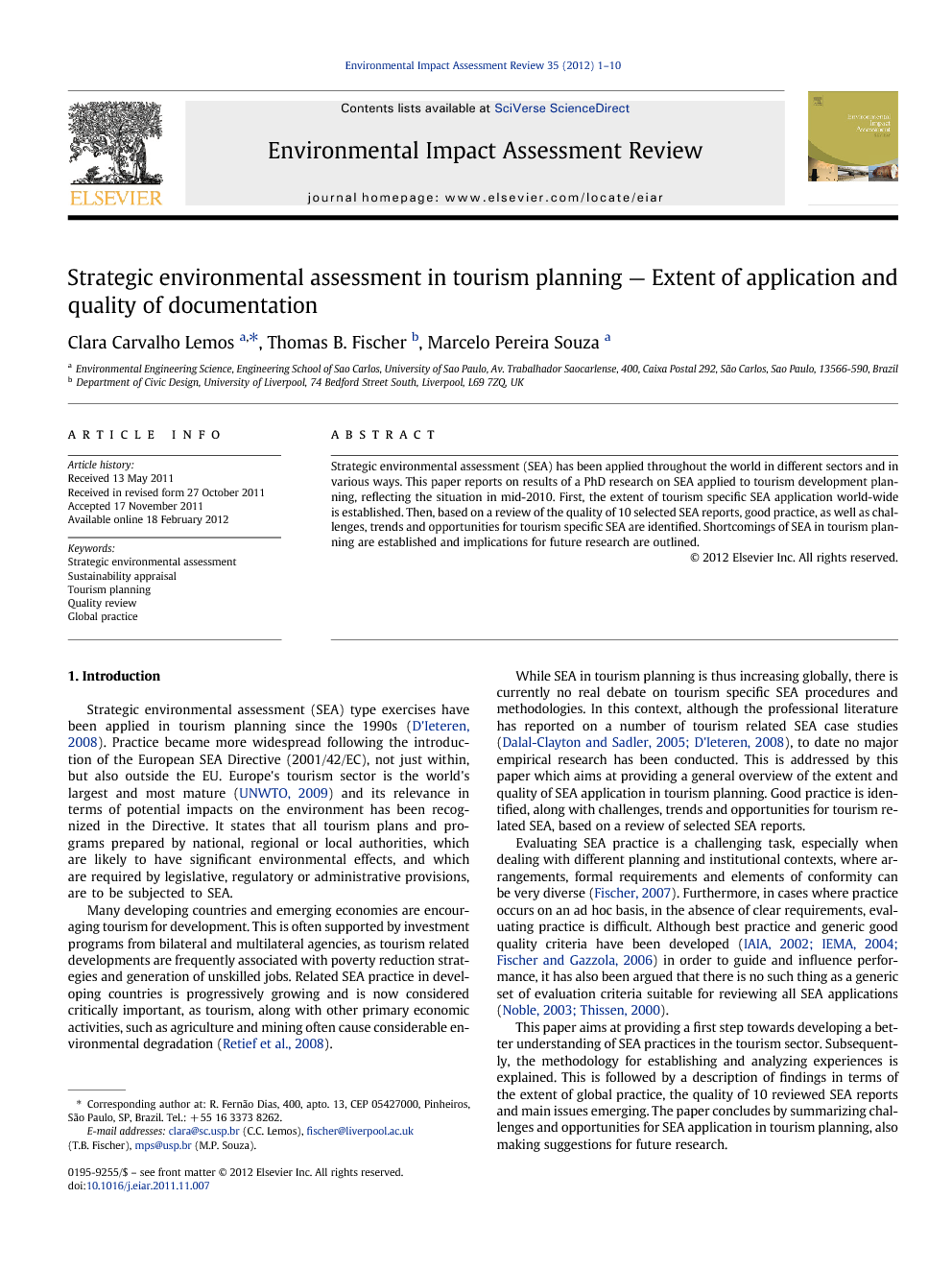 Strategic environmental assessment (SEA) has been applied throughout the world in different sectors and in various ways. This paper reports on results of a PhD research on SEA applied to tourism development planning, reflecting the situation in mid-2010. First, the extent of tourism specific SEA application world-wide is established. Then, based on a review of the quality of 10 selected SEA reports, good practice, as well as challenges, trends and opportunities for tourism specific SEA are identified. Shortcomings of SEA in tourism planning are established and implications for future research are outlined.

Strategic environmental assessment (SEA) type exercises have been applied in tourism planning since the 1990s (D'Ieteren, 2008). Practice became more widespread following the introduction of the European SEA Directive (2001/42/EC), not just within, but also outside the EU. Europe's tourism sector is the world's largest and most mature (UNWTO, 2009) and its relevance in terms of potential impacts on the environment has been recognized in the Directive. It states that all tourism plans and programs prepared by national, regional or local authorities, which are likely to have significant environmental effects, and which are required by legislative, regulatory or administrative provisions, are to be subjected to SEA. Many developing countries and emerging economies are encouraging tourism for development. This is often supported by investment programs from bilateral and multilateral agencies, as tourism related developments are frequently associated with poverty reduction strategies and generation of unskilled jobs. Related SEA practice in developing countries is progressively growing and is now considered critically important, as tourism, along with other primary economic activities, such as agriculture and mining often cause considerable environmental degradation (Retief et al., 2008). While SEA in tourism planning is thus increasing globally, there is currently no real debate on tourism specific SEA procedures and methodologies. In this context, although the professional literature has reported on a number of tourism related SEA case studies (Dalal-Clayton and Sadler, 2005 and D'Ieteren, 2008), to date no major empirical research has been conducted. This is addressed by this paper which aims at providing a general overview of the extent and quality of SEA application in tourism planning. Good practice is identified, along with challenges, trends and opportunities for tourism related SEA, based on a review of selected SEA reports. Evaluating SEA practice is a challenging task, especially when dealing with different planning and institutional contexts, where arrangements, formal requirements and elements of conformity can be very diverse (Fischer, 2007). Furthermore, in cases where practice occurs on an ad hoc basis, in the absence of clear requirements, evaluating practice is difficult. Although best practice and generic good quality criteria have been developed (IAIA, 2002, IEMA, 2004 and Fischer and Gazzola, 2006) in order to guide and influence performance, it has also been argued that there is no such thing as a generic set of evaluation criteria suitable for reviewing all SEA applications (Noble, 2003 and Thissen, 2000). This paper aims at providing a first step towards developing a better understanding of SEA practices in the tourism sector. Subsequently, the methodology for establishing and analyzing experiences is explained. This is followed by a description of findings in terms of the extent of global practice, the quality of 10 reviewed SEA reports and main issues emerging. The paper concludes by summarizing challenges and opportunities for SEA application in tourism planning, also making suggestions for future research.

SEA is widely applied world-wide and is frequently associated with various benefits in various sectors. However, application in tourism planning is still in its initial stages when compared to other sectors, such as transport and spatial/land use. 29 tourism specific SEAs were identified by the authors of this paper. For 25 of these, documentation could be obtained and 10 were subjected to an in-depth quality review. The main shortcomings of current tourism specific SEA application are identified in this paper and include: • Data gaps; these are common and baseline data do not necessarily feed into the impact assessment process and do not provide evidence for assessment. Acknowledgement of key environmental issues linked to tourism development impacts is poor • The assessment of alternatives; this is problematic and a plan versus no plan approach is most common. The tourism planning approach and the plan's scope appear to influence the range and the nature of alternatives dealt with by the SEA process. The absence of a tiered and integrated planning and assessment system has a significant impact on the choice of alternatives, which as a consequence appear unfocussed. • Impact significance; this is rarely addressed and there is a general lack of identification of secondary, cumulative and synergistic impacts. Most expected positive impacts rely on the adoption of mitigation measures to be taken by subsequent actions. • Consultation and its documentation; this is problematic and SEA reporting fails to communicate and clarify how public opinions are addressed and incorporated into the plan and SEA. • Monitoring; this is particularly poorly attempted, both, in terms of establishing an appropriate monitoring system and identifying institutional responsibilities. Tourism planning has evolved over the past few decades and a number of specific procedures and techniques for tourism growth control and assessment, scenarios analysis and carrying capacity management have been developed and applied. The focus of these is mostly on destinations and site management. More research and practice should be focused on how to integrate sectoral procedures and techniques with SEA in order to identify best ways of looking strategically at tourism development and its environmental consequences. While overall, shortcomings are not dissimilar from those identified by other authors for other sectors (Donnelly et al., 2008, Fischer, 2007, Fischer, 2010, Noble, 2003 and Therivel et al., 2009), some areas are performing particularly poorly, as explained above. These should receive particular attention when attempting to raise the quality of tourism specific SEA.