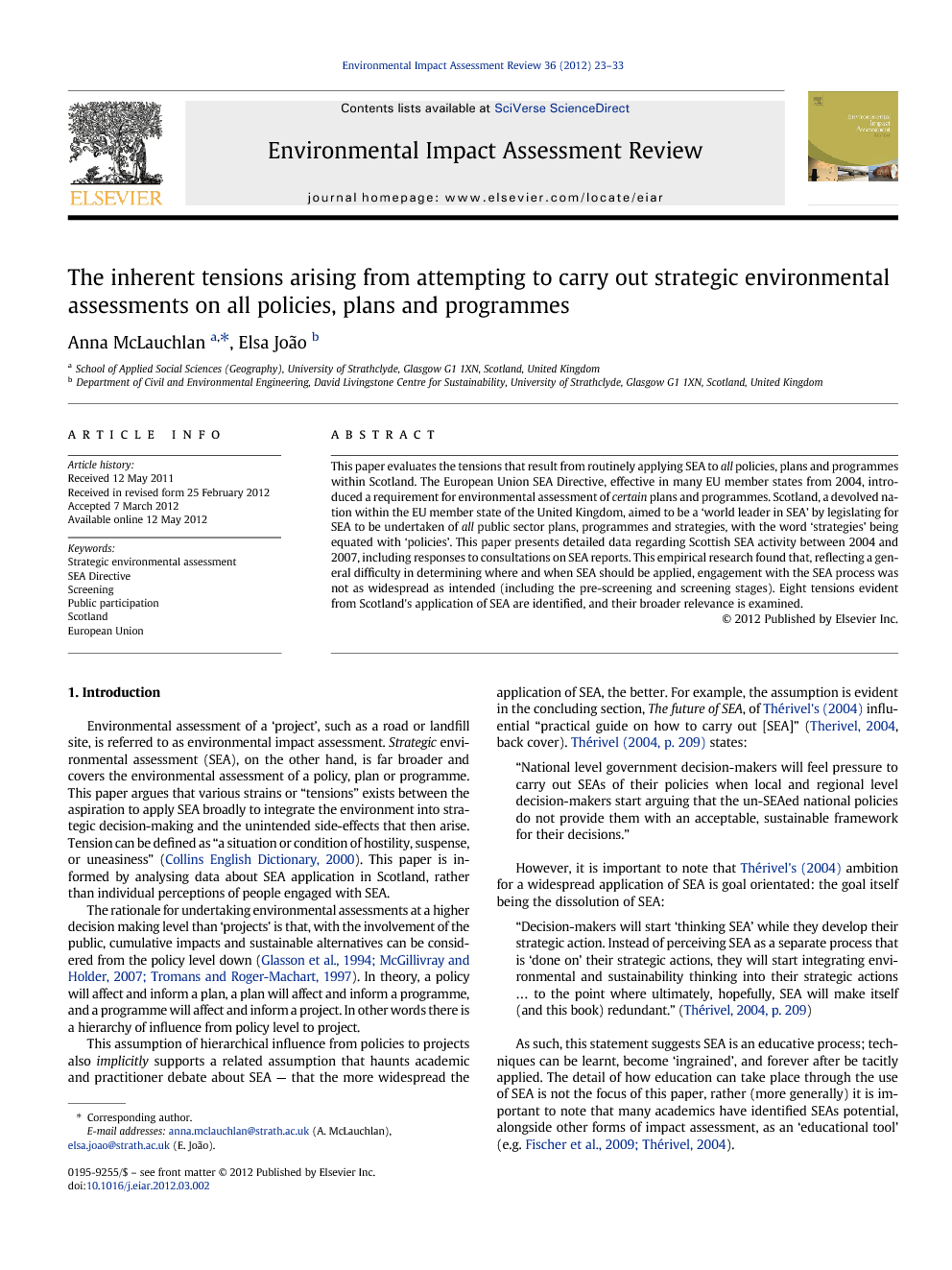 This paper evaluates the tensions that result from routinely applying SEA to all policies, plans and programmes within Scotland. The European Union SEA Directive, effective in many EU member states from 2004, introduced a requirement for environmental assessment of certain plans and programmes. Scotland, a devolved nation within the EU member state of the United Kingdom, aimed to be a ‘world leader in SEA’ by legislating for SEA to be undertaken of all public sector plans, programmes and strategies, with the word ‘strategies’ being equated with ‘policies’. This paper presents detailed data regarding Scottish SEA activity between 2004 and 2007, including responses to consultations on SEA reports. This empirical research found that, reflecting a general difficulty in determining where and when SEA should be applied, engagement with the SEA process was not as widespread as intended (including the pre-screening and screening stages). Eight tensions evident from Scotland's application of SEA are identified, and their broader relevance is examined.

The broader application of SEA in Scotland was viewed as a flagship environmental measure, supporting greater transparency about how public sector decision-making takes account of environmental impacts. However, Scotland's ambition to apply SEA to all plans, programmes and strategies – going further than the SEA Directive – reveals tensions between ideals disseminated though legislation and what can practically happen in practice. Such tensions, summarised in Table 5, are likely to exist for other nations who intend to apply SEA broadly and thus raises questions about whether applying SEA broadly contributes to integrating the environment into strategic decision making. Firstly, although the European Directive applies SEA to plans and programmes there is some flexibility in the interpretation of this term ‘plans and programmes’. This difficulty of defining plan or programme flags up an issue of definition that will arise if other EU member states (or other countries outside the EU) choose to legislate to apply SEA more broadly to their public sector. This issue of definition relates to Tension 1. SEA in Scotland applies more broadly across the public sector, to a broader range of “Scottish public authorities” than the SEA Directive. However there will likely be a general difficulty in determining what exactly is a “public authority”, or a related concept in a language other than English. Allied to this is a second tension – understanding whether or not SEA was being undertaken as broadly as intended necessitates a register of all plans and programmes – however, to register all plans and programmes it is necessary to understand where SEA should be undertaken (back to Tension 1). Clearly, these tensions are only apparent because data is available in Scotland; this will not be obvious in other countries that do not have such detailed data. There is evidence to demonstrate that information is copied between environmental reports or SEA documents. In any system some regularity is required to facilitate administrative procedures, and formats must (to a degree) be followed. Therefore, such regularity is likely to be found in other nations were SEA is being applied. This illustrates Tension 3. Arguably increased application of SEA could increase copying — whether as a result of having a required format, inter-connections between plans and programmes or just general plagiarism. People engaged in the SEA process will be aware that aspects of environmental reports are copied. However, people responding to public consultation arguably view reports as ‘stand alone’ documents. A report may be legally compliant for its plan or programme, but may not reveal how copying influenced its content. Applying SEA broadly will, to an extent, require the development of routines. Tension 4 is the tension between the need for a regularised process to enable efficiency which reflects a value system and the ability of SEA to reappraise or examine dominant values in attempt to change how people ‘think’. Viewing inter-connections between different reports draw attention to the limited number of people involved in SEA. Although SEA should be undertaken in-house — in practice often experts are involved. In a country the size of Scotland, but also more broadly, there is a limited number of people available to undertake specialist forms of assessment (Tension 5). Additionally, where a large number of organisations intend to undertake SEA there will be practical limits to the people available to participate in the SEA process (Tension 6). The SEA Act requires every public sector organisation in Scotland to engage with SEA. But can SEA realistically be integrated into day-to-day activities so that all public sector decision makers are ‘thinking SEA’? As was demonstrated it is difficult to monitor whether SEA is being done, but it is even more difficult to assess how it is being done. The lack of participation, either in the production of the reports (Tension 5) or more broadly (Tension 6), undermines the idea that legal challenge would motivate widespread application of SEA (Tension 7). All of this discussion prompts a bigger set of questions. Is SEA meant to be an uncomplicated process that can be easily streamlined into public sector decision-making? Does changing the way people think, using SEA or other mechanism, necessitate some discomfort on behalf of those taking part in this change? Highlighting tensions is an essential process, as it promotes thought about the application of SEA. Without thought, legislation to apply SEA broadly may itself be in tension with the objective of integrating environmental considerations into strategic decision making.