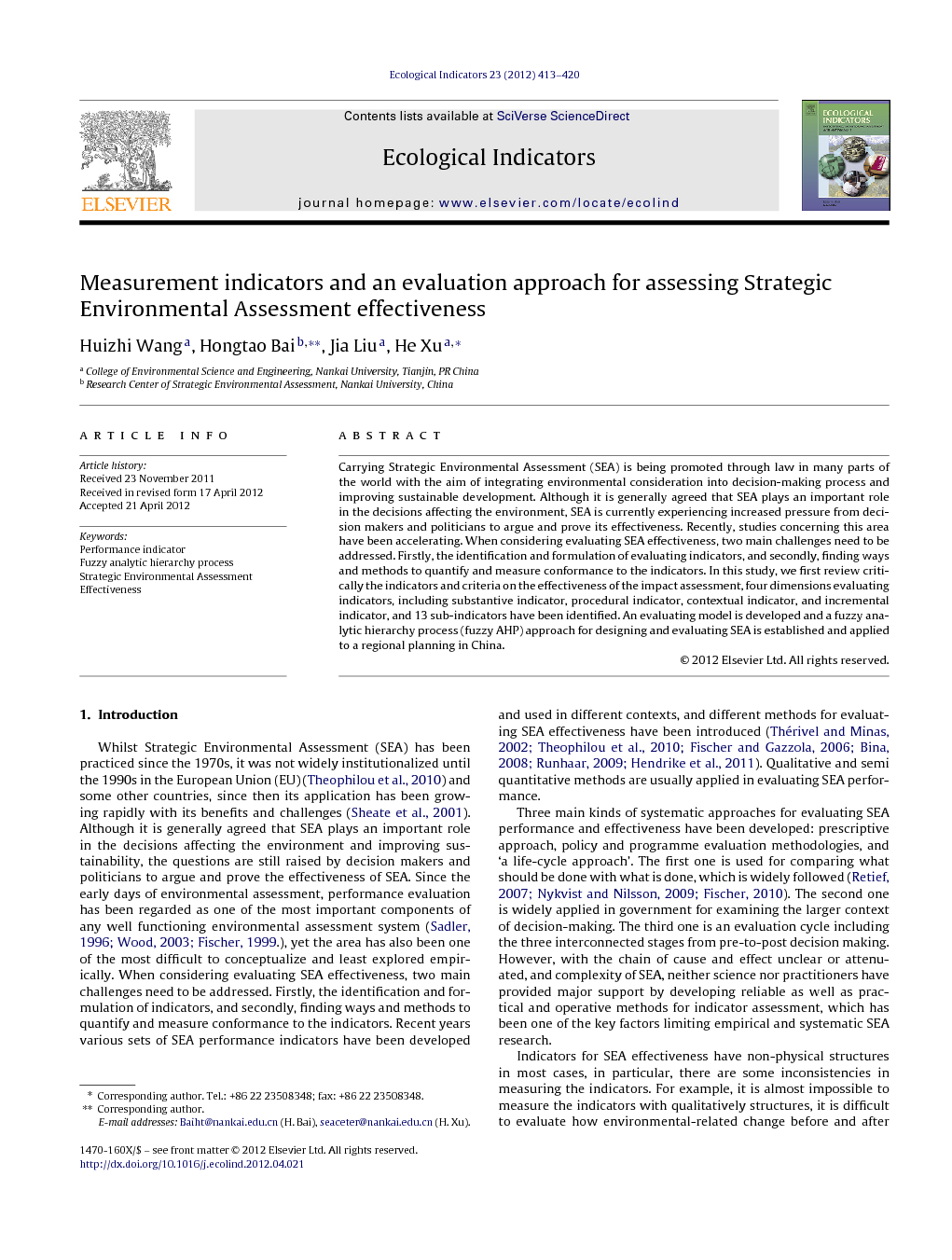 Carrying Strategic Environmental Assessment (SEA) is being promoted through law in many parts of the world with the aim of integrating environmental consideration into decision-making process and improving sustainable development. Although it is generally agreed that SEA plays an important role in the decisions affecting the environment, SEA is currently experiencing increased pressure from decision makers and politicians to argue and prove its effectiveness. Recently, studies concerning this area have been accelerating. When considering evaluating SEA effectiveness, two main challenges need to be addressed. Firstly, the identification and formulation of evaluating indicators, and secondly, finding ways and methods to quantify and measure conformance to the indicators. In this study, we first review critically the indicators and criteria on the effectiveness of the impact assessment, four dimensions evaluating indicators, including substantive indicator, procedural indicator, contextual indicator, and incremental indicator, and 13 sub-indicators have been identified. An evaluating model is developed and a fuzzy analytic hierarchy process (fuzzy AHP) approach for designing and evaluating SEA is established and applied to a regional planning in China.

Whilst Strategic Environmental Assessment (SEA) has been practiced since the 1970s, it was not widely institutionalized until the 1990s in the European Union (EU) (Theophilou et al., 2010) and some other countries, since then its application has been growing rapidly with its benefits and challenges (Sheate et al., 2001). Although it is generally agreed that SEA plays an important role in the decisions affecting the environment and improving sustainability, the questions are still raised by decision makers and politicians to argue and prove the effectiveness of SEA. Since the early days of environmental assessment, performance evaluation has been regarded as one of the most important components of any well functioning environmental assessment system (Sadler, 1996, Wood, 2003 and Fischer, 1999.), yet the area has also been one of the most difficult to conceptualize and least explored empirically. When considering evaluating SEA effectiveness, two main challenges need to be addressed. Firstly, the identification and formulation of indicators, and secondly, finding ways and methods to quantify and measure conformance to the indicators. Recent years various sets of SEA performance indicators have been developed and used in different contexts, and different methods for evaluating SEA effectiveness have been introduced (Thérivel and Minas, 2002, Theophilou et al., 2010, Fischer and Gazzola, 2006, Bina, 2008, Runhaar, 2009 and Hendrike et al., 2011). Qualitative and semi quantitative methods are usually applied in evaluating SEA performance. Three main kinds of systematic approaches for evaluating SEA performance and effectiveness have been developed: prescriptive approach, policy and programme evaluation methodologies, and ‘a life-cycle approach’. The first one is used for comparing what should be done with what is done, which is widely followed (Retief, 2007, Nykvist and Nilsson, 2009 and Fischer, 2010). The second one is widely applied in government for examining the larger context of decision-making. The third one is an evaluation cycle including the three interconnected stages from pre-to-post decision making. However, with the chain of cause and effect unclear or attenuated, and complexity of SEA, neither science nor practitioners have provided major support by developing reliable as well as practical and operative methods for indicator assessment, which has been one of the key factors limiting empirical and systematic SEA research. Indicators for SEA effectiveness have non-physical structures in most cases, in particular, there are some inconsistencies in measuring the indicators. For example, it is almost impossible to measure the indicators with qualitatively structures, it is difficult to evaluate how environmental-related change before and after SEA, and how plan changes due to SEA. For this reason, measuring SEA effectiveness inquires a holistic approach. Indicators affecting SEA performance should be measured not separately but in a multi-dimensional approach that considers indicators simultaneously. Based on this fact, in this study, after critical review of the state-of-the-art in assessing the performance of SEA indicators, indicators and sub-indicators of SEA performance are explored, a evaluating model and fuzzy analytic hierarchy process (fuzzy AHP) method are developed to exam SEA effectiveness. Using this method, all the indicators are integrally evaluated and also the indicators which cannot be measured by crisp numbers exactly are evaluated effectively using fuzzy numbers. The fuzzy AHP has the advantage of mathematically representing uncertainty and vagueness and provides formalized tools of dealing with the imprecision intrinsic to many problems (Chang and Yeh, 2002). This model was elaborated to help visualize which indicators are prioritized and formulate strategies for SEA implementation, and a detailed evaluation of the SEA performance for urban planning is presented. Using such an approach, decision-makers can evaluate both the potential and the actual performance of SEA.

Many countries have committed to adopting SEA as effective tool to help decision makers promote sustainable development. To date, the evaluation of compliance with the commitment to develop SEA is largely based on whether countries have developed a strategy or not, not whether the SEA is effective. In pursuit of a more empirical and detailed account of SEA effectiveness, in this study, four main indicators, including substantive indicator, procedural indicator, contextual indicator, and incremental indicator, and 13 sub-indicators have been identified based on the current literature review. A comprehensive model has been developed to determine the SEA performance. A fuzzy AHP approach is applied to formulate a frame work of indicators and to determine the relative importance of the indicators and sub-indicators. The membership analysis method is applied to determine the values of the quantitative sub-indictors, which makes the results of the evaluation more accurate and comparable. This approach for designing and evaluating SEA is then applied to a regional planning in China. The study shows that substantive indicator and procedural indicator devote most effectiveness to SEA implementation, to be specific, the following attributes: contribution of SEA to decision-making and plan, quality of SEA procedure and report, outcomes of the SEA, and explicit legal requirement of SEA, are the most important attributes to overall effectiveness of SEA. In SSTEC case study, the comprehensive effectiveness of SEA is 0.641, which means SSTEC SEA is relatively effective. The proposed methodology for performance evaluation of SEA has several innovative characteristics. (i) It establishes a comprehensive system of indicators with which to evaluate the SEA effectiveness, and proposes a hierarchical framework that integrates criteria in a single framework. (ii) Developing reasonable measures for the SEA effectiveness based on expert's qualitative preferences together with quantitative data. The weighting method has been improved, thus, the performance evaluation model becomes more flexible and reasonable. (iii) Developing a method to solve the evaluating uncertainty problem given linguistic constraints. The framework can provide decision-makers and researchers a better understanding of SEA performance. Although the model was developed and tested for use in a specific case study, the experimental result shows that the proposed approach can be used, with some modifications, in other cases. This proposed model establishes a foundation for future research and is appropriate for predicting uncertain criteria.