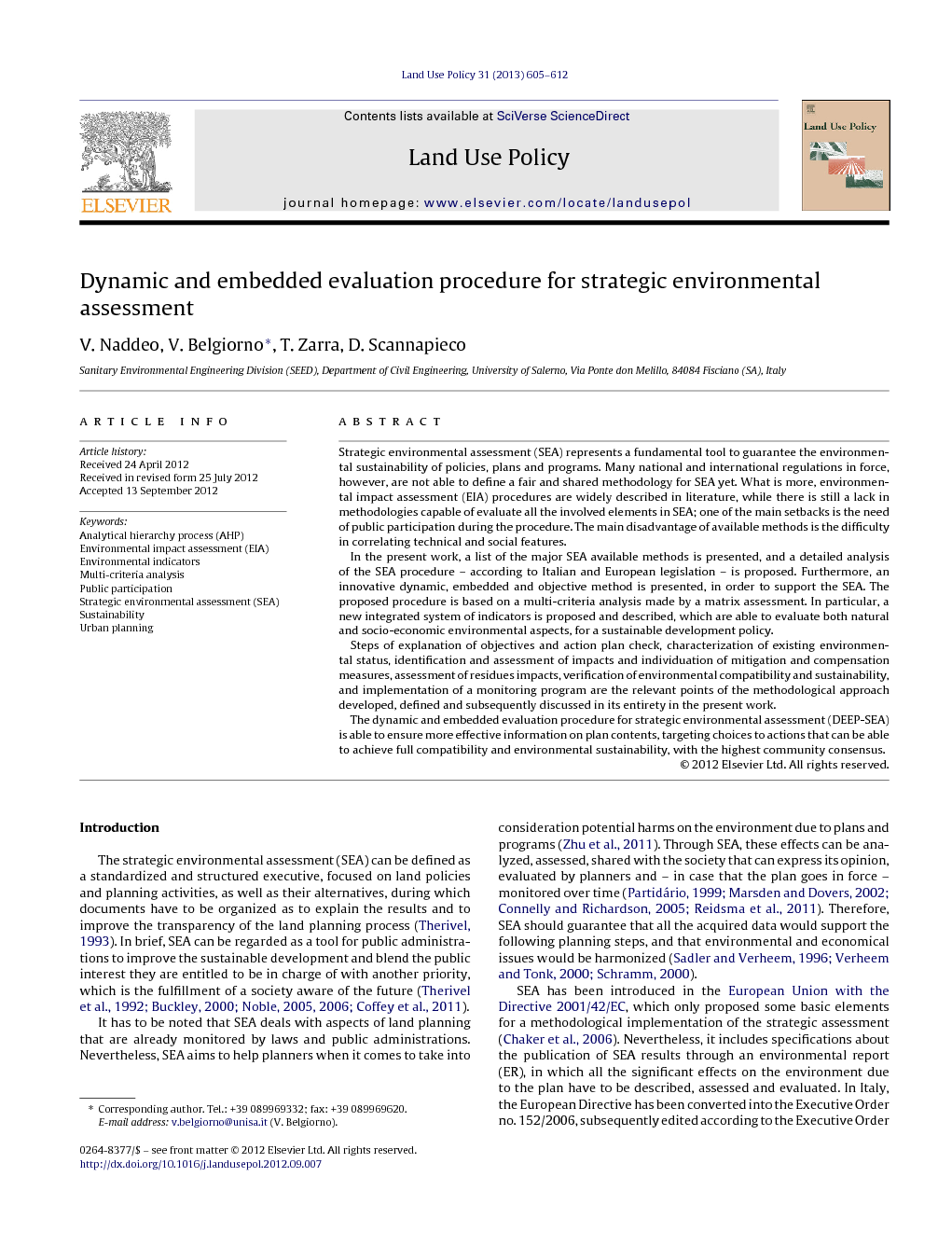 Strategic environmental assessment (SEA) represents a fundamental tool to guarantee the environmental sustainability of policies, plans and programs. Many national and international regulations in force, however, are not able to define a fair and shared methodology for SEA yet. What is more, environmental impact assessment (EIA) procedures are widely described in literature, while there is still a lack in methodologies capable of evaluate all the involved elements in SEA; one of the main setbacks is the need of public participation during the procedure. The main disadvantage of available methods is the difficulty in correlating technical and social features. In the present work, a list of the major SEA available methods is presented, and a detailed analysis of the SEA procedure – according to Italian and European legislation – is proposed. Furthermore, an innovative dynamic, embedded and objective method is presented, in order to support the SEA. The proposed procedure is based on a multi-criteria analysis made by a matrix assessment. In particular, a new integrated system of indicators is proposed and described, which are able to evaluate both natural and socio-economic environmental aspects, for a sustainable development policy. Steps of explanation of objectives and action plan check, characterization of existing environmental status, identification and assessment of impacts and individuation of mitigation and compensation measures, assessment of residues impacts, verification of environmental compatibility and sustainability, and implementation of a monitoring program are the relevant points of the methodological approach developed, defined and subsequently discussed in its entirety in the present work. The dynamic and embedded evaluation procedure for strategic environmental assessment (DEEP-SEA) is able to ensure more effective information on plan contents, targeting choices to actions that can be able to achieve full compatibility and environmental sustainability, with the highest community consensus.

The strategic environmental assessment (SEA) can be defined as a standardized and structured executive, focused on land policies and planning activities, as well as their alternatives, during which documents have to be organized as to explain the results and to improve the transparency of the land planning process (Therivel, 1993). In brief, SEA can be regarded as a tool for public administrations to improve the sustainable development and blend the public interest they are entitled to be in charge of with another priority, which is the fulfillment of a society aware of the future (Therivel et al., 1992, Buckley, 2000, Noble, 2005, Noble, 2006 and Coffey et al., 2011). It has to be noted that SEA deals with aspects of land planning that are already monitored by laws and public administrations. Nevertheless, SEA aims to help planners when it comes to take into consideration potential harms on the environment due to plans and programs (Zhu et al., 2011). Through SEA, these effects can be analyzed, assessed, shared with the society that can express its opinion, evaluated by planners and – in case that the plan goes in force – monitored over time (Partidário, 1999, Marsden and Dovers, 2002, Connelly and Richardson, 2005 and Reidsma et al., 2011). Therefore, SEA should guarantee that all the acquired data would support the following planning steps, and that environmental and economical issues would be harmonized (Sadler and Verheem, 1996, Verheem and Tonk, 2000 and Schramm, 2000). SEA has been introduced in the European Union with the Directive 2001/42/EC, which only proposed some basic elements for a methodological implementation of the strategic assessment (Chaker et al., 2006). Nevertheless, it includes specifications about the publication of SEA results through an environmental report (ER), in which all the significant effects on the environment due to the plan have to be described, assessed and evaluated. In Italy, the European Directive has been converted into the Executive Order no. 152/2006, subsequently edited according to the Executive Order no. 128/2010. Moving along the SEA procedure pattern, its first step consists in a screening phase (Fig. 1), as to check whether or not the specific plan falls under the SEA procedure. In order to gather data to prepare the ER, a critical issue is related to finding a satisfactory delimitation of the area that will be investigated during the procedure, in terms of physical dimensions as well as orders of indirect impacts that have to be considered by assessors. This second phase is referred as to scoping, and decisions made here have a strong influence over the results. In the scoping phase, assessors have to make decisions about the plan or program (P/P). The following step is basically the data collection phase, as environmental data is needed in order to understand the environmental status before the plan. As a conclusion of the process, assessors can finalize their work in the form of the ER, coupled with a non-technical summary of it. The latter is published because the population has to participate in the process, and technical jargon could ultimately deter people from contributing in the procedure. As for the final report, all the steps of the SEA process have to allow people to express themselves and give a feedback. Despite the fact that a large number of studies about SEA aims to develop an objective methodology, the subjective nature of the impact evaluation may arise, especially at the moment of the methodology choice amongst all the models available in literature (Song et al., 2011). Concerning models, in general they are characterized by implementation easiness, and very often they are a revised version of models developed for the environmental impact assessment (EIA) (e.g. checklists) (Carter and Kamath, 1995, Tzilivakis et al., 1999 and Kuitunen et al., 2008). In case of more complex analyses, advanced methodologies can be introduced into SEA, such as forecasting models (Canu et al., 2001, Anderson et al., 2003 and Wang et al., 2009) and multi-criteria analyses (Munier, 2004), as to facilitate alternatives comparison. Table 1 shows the main methodologies available in literature, ordered in function of the SEA step in which they can be usefully employed (Fischer and Gazzola, 2006 and Partidário, 2007). Still, lack of global agreement on one methodology to assist the SEA process that can be widely accepted by both researchers and engineers makes the decision-taking phase even more difficult (Kontic and Kontic, 2012 and Mascarenhas et al., 2012). Moreover, until a specific methodology will not be identified, SEA results cannot be compared. Therefore, this work aims to propose an innovative integrated methodology for SEA, able to implement engineering aspects – mostly related to forecasting models and evaluation of impacts on the environment – as well as social issues, as to understand economical implications. In addition, the proposed methodology focuses on promoting people participation in the procedure.

The proposed procedure aims to deal with the SEA procedure as reported in the implemented four phases. In detail, the proposed approach introduced a multi-criteria analysis combined with matricial elements, and achieved goals are listed below: – Coherence analysis between overall environmental sustainability goals and P/P specific goals; – Definition of aPP and consequent assessment of their effects on the environment through the delineation of a specific set of indicators; – Introduction of additional compensation actions and assessment of residual impacts on the environment; – Enhanced people involvement into the SEA procedure; – Analysis of the environmental sustainability of the P/P in different scenarios. The proposed procedure is therefore able to provide synthetic comparisons of the impacts related to different alternatives to the specific P/P, therefore assisting the decision-making process and improving the knowledge of the real environmental impacts significance.